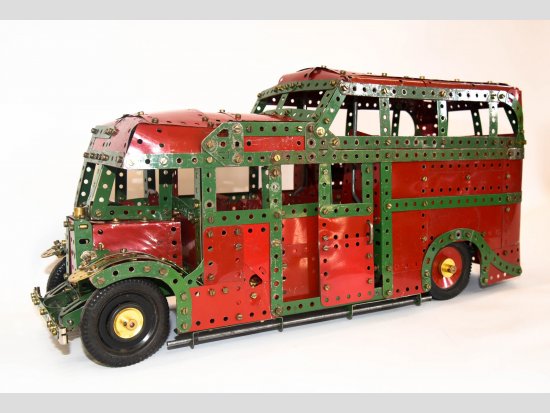 Jim Gamble, President, gathered the assembled company together, firstly around a further splendid collection of fire engines and related vehicles built by George Illingsworth. One particularly striking model, possibly for nostalgic reasons, was an Interstation Bus, based on a design by Geoff Wright in Constructor Quarterly 113 at 1:14 scale. Although we are all probably familiar with Land Rover Fire Tenders, especially at hill climb meetings etc, when lent by Rover itself, George reminded us of a similar Austin Gypsy Fire Tender from 1962. Another vehicle carrying something of a tale was a GMC Mobile Workshop, originally designed as a searchlight tractor for France but delivered to England and eventually ending up with the Fire Service. 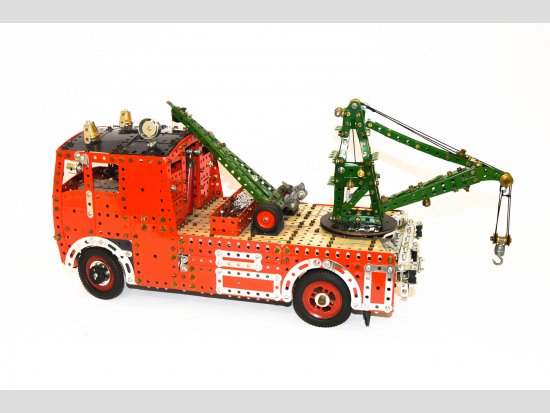 One London Fire Brigade support vehicle was a 1960 Breakdown Lorry equipped with a 1930’s Herbert Morris crane and George had produced a finely detailed model of this. George’s final model was a 4-wheel steering Bobcat with shovel. Still a connection to Fire Services? Of course: they are used by the Urban Search and Rescue Service of the London Fire Brigade. 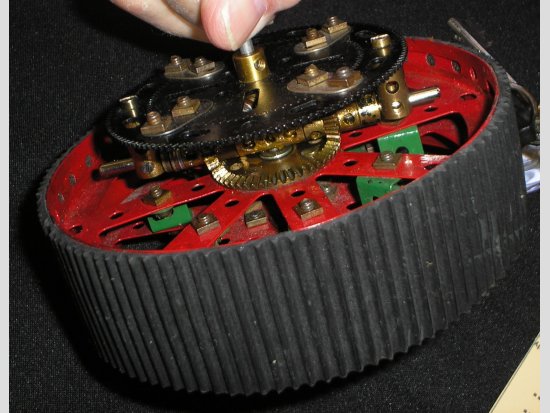 Dave Phillips presented his latest work on the Traction Engine rear wheel with built-in differential. Dave had noticed how new gears were often poorly cut and left with burrs. He decided it would be a good idea to hone them in by spinning them with a Blacker and Decker drill. It seemed to have worked as he was able to rotate the drive smoothly with his fingers. 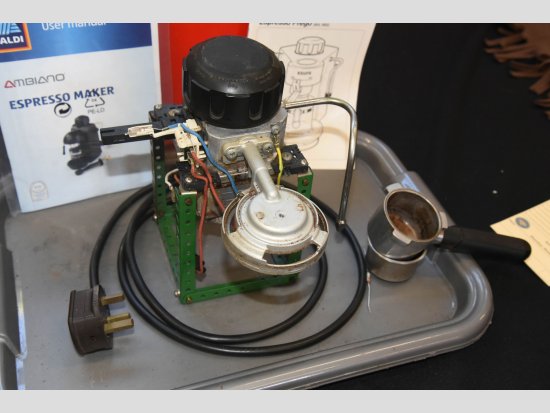 Colin Goodman had a “Meccano-to-the-Rescue” tale to tell. Colin’s ancient Krups Espresso Coffee Maker had died but, in order to find out why, it needed to be stripped of its outer casing and put on test. But it needed a test stand. A raid on the Meccano chest; 4 x 4½ʺ and 4 x 5½ʺ angle girders later it had an integral stand. Turns out the fault was a failed bi-metallic thermal limiter leading to the blowing of an irreversible thermal fuse. Parts were obtained, but in the meantime, Colin spotted a functionally identical machine in Aldi at an amazing low price so the Krups machine remains “work-in-progress”! 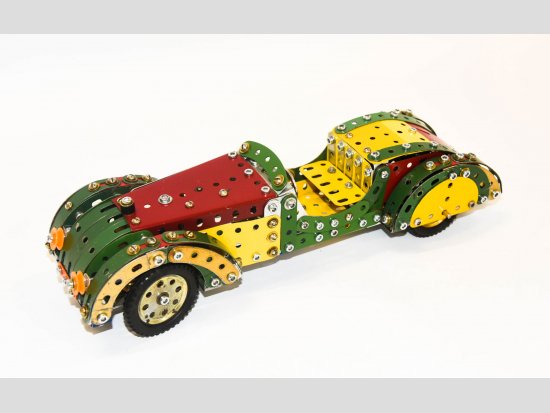 Dennis Backler was delighted to be able to present his Peugeot Darl’mat Roadster, previously seen as “work-in-progress”, now complete. It now has all its wheels and a steering linkage that Dennis found a challenge to construct in a very tight space. He had also faced a challenge with joining the two curved slotted strips forming the wings into a smooth curve and eventually solved it by using memory strips (part B487), having found splayed-out obtuse angle brackets simply did not give a clean result. All agreed that the final result justified his struggles and looked very handsome. 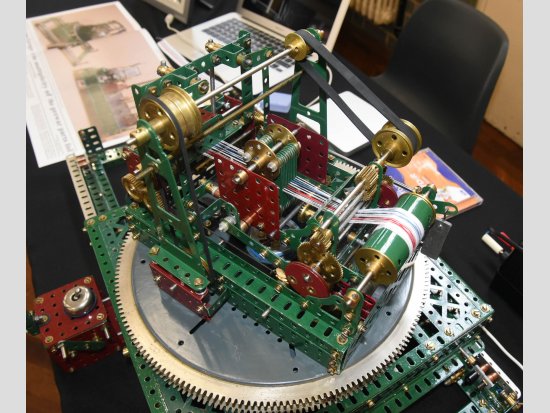 Geoff Bennett had brought along his Lockdown Loom, a name he had chosen to reflect its genesis partly as a result of being confined to barracks by the pandemic. Geoff has written comprehensively on the model in Constructor Quarterly 132 June 2021. Geoff proudly showed us the quality of the patterned ribbon that the loom could produce and recalled that another part of the inspiration grew from pondering on “when did I last use a sandroller?” and other old parts. The loom is indeed a tour-de-force but, if anything, Geoff was most tickled by the way he had mounted it on a short railway, complete with an automatically operated semaphore signal. What a flight of fancy and a delight to witness.
Geoff also showed us a video of a model Tank he had entered for a MM Competition in 1966 and which had won 2nd prize. 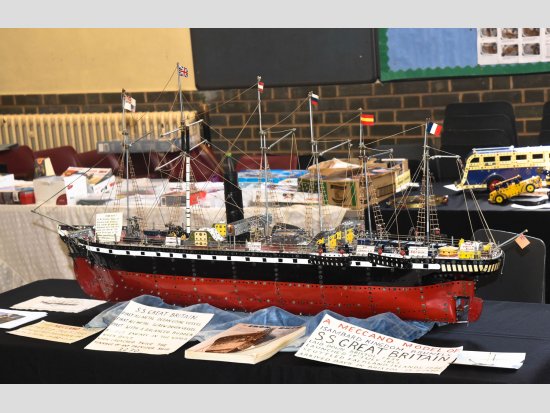 Sid Beckett offered a reprise of his magnificent SS Great Britain which he now reckons is complete and took a total of 132 hrs to construct. The model now has fully detailed rigging complete with a set of flags and Sid explained the significance of each of them. The model is now off to Liverpool to be displayed in their museum.
Sid’s young friend Hassam was with him and had made a model of his own: a high wing monoplane in yellow and silver. 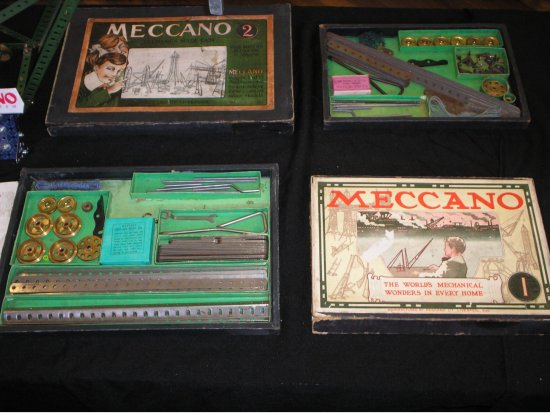 John Lavers had brought a comprehensive collection of early Meccano sets and a much more recent one to make the historical contrast. He also had an example of an alternative construction system to further broaden the comparisons. Particularly interesting items were an example of the first Meccano Outfit, two sets in their original sleeve boxes from 1908 and 1909 and a modern No 1 Set which built up into a windmill (albeit in plastic). John had put this alongside a Primus kit boasting a windmill on the box illustration to give a feel for 120 yrs of construction kits. 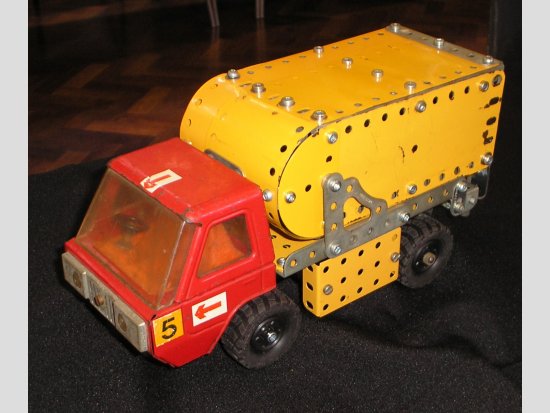 Dave Bradley had built a 1960’s Dustbin Lorry using some Multikit parts e.g. the cab. He had arranged this so it could lift forward to compress the rubbish and tip backwards to discharge at the tip. Congratulations to Dave as he recovers from his recent trials. 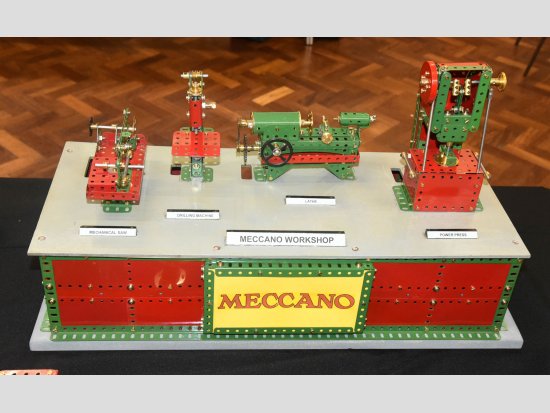 Jim Gamble’s own offering was of a restoration project on a dealer’s shop window display. Jim had found the display in a poor state but after a lot of work on the base and careful and judicious choices between refurbishing the old parts or substituting contemporary parts in good condition, Jim had produced a very good-looking display of model machine tools: a mechanical saw, a drilling machine, a lathe, and a power press.
Jim also showed a small Tank based on a 1950’s small outfit model but with plastic tracks. 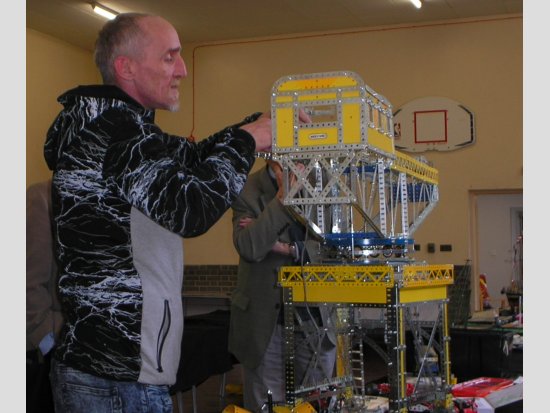 Joe and Ellie Douglas had a combined display, the main item being Joe’s version of the Super Model Blocksetting Crane. Joe explained that all the motions were driven but he had not found the instructions easy to follow. He had also rearranged the stringing to his own design. All present felt he was to be congratulated on his adaptation of the original design.
Joe also showed several other models, notably a Tractor that he only assembled two days before the meeting but looked most convincing with impressive fly-away rear mudguards. He also presented a Ducati motorbike and two cars, one an out-and-out racing car and one a sports car.
Ellie had assembled the No. 1 Handcart in silver and blue and loaded it with Road-wheels. 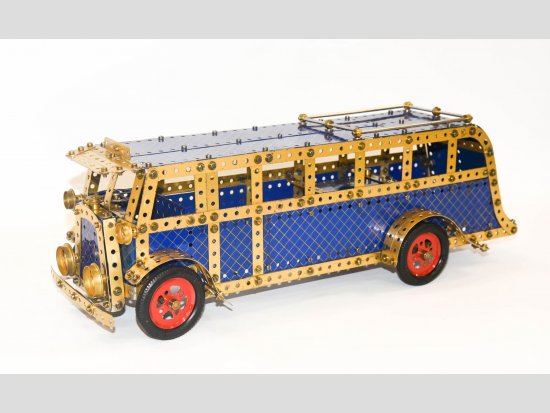 Mike Burgess had his usual large range of models on display. Some that caught the attention included: a) a motorised 1930’s Coach in Blue and gold b) a six-wheel breakdown truck (with several other breakdown vehicles alongside for contrast) c) a twin-cylinder steam engine of the type that would have been in a Paddle Steamer and d) a six-wheeled army Scout Car. 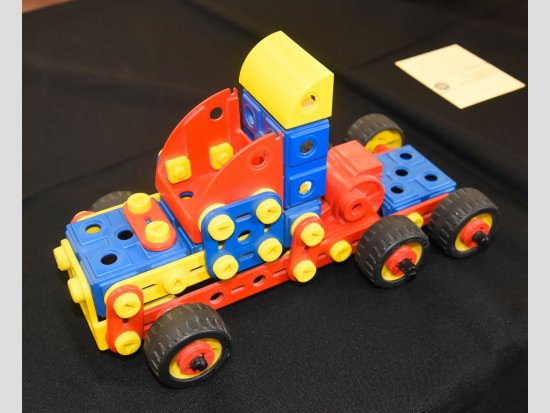