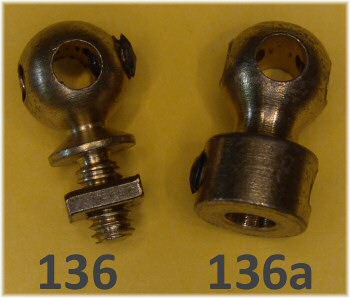 The Handrail Support, part 136, was introduced in the May 1922 Meccano Magazine, and four of them were supplied in outfits 6 and 7 from 1924.  The sister part 136a, Handrail Coupling, took ten more years.

In the January 1932 Meccano Magazine, a J. Hamilton of Belfast suggested a new form of Handrail Support "manufactured with a boss drilled to take a standard Axle Rod in place of the threaded projection", and this suggestion was well received by Meccano.  The Handrail Coupling was first mentioned in the September 1932 Meccano Magazine, but wasn't added to the existing or the new lettered outfits of 1934.

One finally made its appearance in the new 1937 outfit 10, increased to 2 with the wartime reintroduction.  As a result, these parts are less common than the Handrail Support and it is quite rare to find pre-war parts. 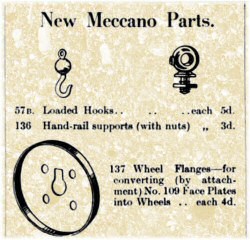 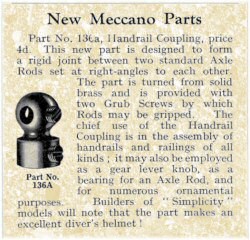 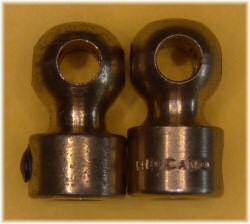 The Handrail Support was originally single-tapped, and became double-tapped in the late 1920s along with other parts. The Handrail Coupling, on the other hand, is only found double-tapped as it made its first appearance in 1932.

The only slight change I've seen is that the very late Meccano France Handrail Couplings appear to have a larger boss than earlier UK-manufactured parts. It's only a matter of a millimetre or less, but is fairly obvious when you view a pair together.

Pre-war parts are stamped (with MFEA or later just Meccano), either around the base or over the top of the parts. Post-war parts aren't stamped at all. Interestingly, my examples of French production post-Binns Road are stamped, the only brassware I can find that is. The photo to the right shows a pre-war (stamped), post-war (unstamped), and French Handrail Support. You can see from the picture above that the French Handrail Coupling is stamped around the base.

Meccano and Hornby Handrail Support
This image does not belong to the webmasters and is copyright.
Please do not download or copy it for any purpose. It has been
kindly provided for use on this site by the image owner,
Clive Weston 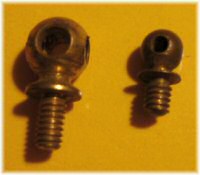 One more oddity is shown right. Clive Weston reminds us that there exists a very small part looking very much like a handrail support, that often turns up at the bottom of Meccano collections. This is in fact from the boiler of a Hornby train. Just so you know what it is when you find one! 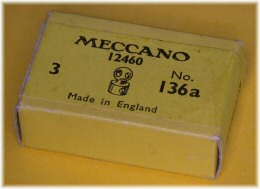 1981 (estimated) bag of six Handrail Couplings
This image does not belong to the webmasters and is copyright.
Please do not download or copy it for any purpose. It has been
kindly provided for use on this site by the image owner,
Richard Payn

The image to the left shows a late 1950s spare parts box containing three Handrail Couplings, part 136a. As these are brass, the boxes stay the same right through to the silver/yellow/black period. To the right, a bag of Handrail Couplings (even though the label incorrectly describes them as part 136), believed to be from the last period of UK Meccano spare parts in 1981.

1970s packet of three handrail supports part 136
This image does not belong to the webmasters and is copyright.
Please do not download or copy it for any purpose. It has been
kindly provided for use on this site by the image owner,
Richard Payn 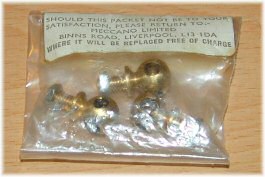 To the right we have a slightly earlier pack of three Handrail Supports part 136, dating from the late 1970s. Note the incongruous hexagonal zinc plated nuts helping us date these. Below, a similarly dated bag of three part 136a.

1970s packet of three handrail couplings part 136a
This image does not belong to the webmasters and is copyright.
Please do not download or copy it for any purpose. It has been
kindly provided for use on this site by the image owner,
Richard Payn 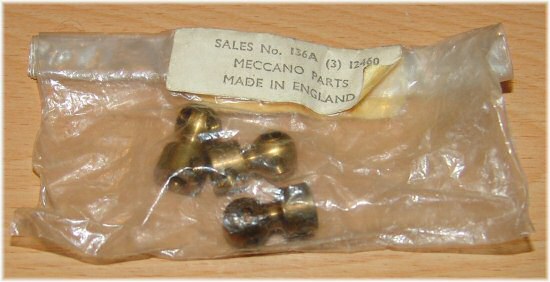