The picture above shows all five sizes of sprocket wheels in the Meccano system.  Matt black sprocket wheels are post-war, and the most common colour scheme.  There is one more often overlooked (see, I nearly did it there), which is part 168b the toothed disc section of the ball thrust bearing.

In combinations, these sprocket wheels can create a number of very interesting gear ratios.  More than that, it's also not universally known that the standard Meccano spur gears are designed to work with the sprocket chain over every alternate tooth.  This gives us wheels with 25, 28½, 30, 47½, and 67½ effective sprocket teeth to go with the 14, 18, 28, 36, and 56 shown above and the 73 teeth of the toothed ball race.  Truly a huge range of ratios available!

Interestingly, 73 is a factor of 365, which can come in handy building simple orreries or complex clocks.  It would be interesting to know whether Meccano planned this fact deliberately.

Three types of teeth: semicircular (top), slightly rounded (left),
and the normal pointed teeth (right)
All images on this site are copyright. This particular image belongs to the
webmasters, and you may copy it for your personal use, or for a non-
commercial website - if you credit the source. All other rights reserved. 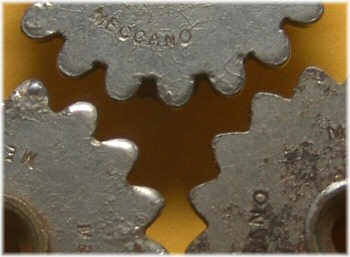 The most significant change in the sprocket wheels is in the shape of the earliest teeth.  These are normally described as "rounded" or "semicircular".  Without photographs this is about as accurate as we can get.  However, I believe that there are three shapes – semicircular, then slightly rounded, then the final pointed shape that became standard on all versions after the nickel-plated ones.

The photo above right shows the three different types of teeth, which can be seen (I believe) only on the 1'' and 2'' sprockets.  This would date the change to pointed teeth before 1921/2, when the other sizes of wheels came into the system.  We would need to find a dated and unused inventor's outfit to improve on this date.  Or, we can move it on if we find other sprocket sizes with the slightly rounded teeth.

There is a strange sequence of bosses in the largest (2'' and 3'') sprocket wheels during the 20's.  The easily overlooked part of this is that the large (half-inch) boss is seen in two types.  The first is an enlarged copy of the smaller boss, but the later version is of an improved design where the central hole is not circular.  This prevents the boss from slipping in the part, an important consideration in the larger sprocket wheels.  Compare this with part 19b (the 3'' pulley), where the large boss was simply dropped from the part.  Clive Weston speculates on the sequence of events:

1926:  We are introducing double tapped bosses on all parts.  Why do we need to keep the large bosses at additional cost?  OK, go ahead with all small bosses on next production.

Clive Weston
I have fiddled with the dates above, but this hypothetical sequence does match up with other parts found.  The 3'' pulley part 19b changes to a half-inch boss at the introduction of the 3'' sprocket, and loses it at a similar time (just after dark red paint comes in).  It didn't regain it, probably because there is nothing like as much torque on a 3'' pulley.  Part 27b (the 3½'' spur gear), starts with a single-tapped large round boss (in 1924), but changes directly to the improved half-inch boss at the same time as the 95 and 95b adopt them.  This part breaks the above sequence as it is not known with a small boss.  However, it does change from the old to new-type half-inch boss at around the same time.

There is a little more time available for this change than is usually thought.  Sprocket wheels didn't appear in dark green until much later than ordinary Meccano parts, lasting well into 1928.  In a mint December 1927 outfit the 2'' sprocket is still nickel, and has the small double-tapped boss.

Many thanks to John Nuttall for this detailed research which obviously entailed hours of poring over Meccano Magazines.  What dedication!

The following entries in the Meccano Magazine and other manuals show the sequence of sprocket wheels appearing around these dates.  Note that the date of publication shows only that the part existed a short time before the printing date.  It could have existed perhaps 6 to 12 months earlier than this in some instances.

Note that in the 1927 and 1928 manuals (last printing May 1928) the sprocket wheels are marked with an asterisk and noted as being only available in nickel finish, as described above.  Green sprockets date therefore from some time after May 1928 and before March 1929 (when the asterisk is missing).

We can speculate that the 3'' and 6'' pulleys (parts 19b and 19c) were not given the new version of the half-inch boss because they are made from two thin pieces of steel, rather than 95, 95b, and 27b that are made from significantly thicker stock.  Perhaps some part of the process made using these flattened bosses more difficult to add to the other parts.

Four different blacks on post-war sprocket wheels
All images on this site are copyright. This particular image belongs to the
webmasters, and you may copy it for your personal use, or for a non-
commercial website - if you credit the source. All other rights reserved. 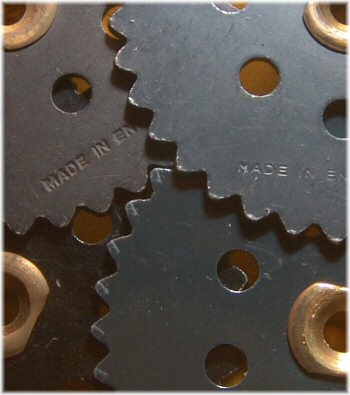 After nickel plating, the sprocket wheels went through a range of colours along with the pulleys and many other parts during the 30's, then settled on black when they were reintroduced after the war.  But there is more than one black, as I hope to show from the picture to the left.  It's extremely hard to get photos of these blacks, but we can try.

Top right is the common post-war matt black, which you will notice is very subtly textured.  Top right is what I have called "blue/black".  It's noticeably different, and you don't need to have it next to a black one to spot the difference in reasonable light.  The finish is smoother and less matt than the earlier one.

Bottom left is the gloss black version – these are a full gloss and easily identifiable.  Martin Hanson has confirmed the existence of these two types.  It is thought that the blue/black coincides more or less with the start of the silver/yellow/black period in 1964, and the gloss black from the start of blue/yellow/zinc in 1970.

At the very end of Binns Road production, sprockets changed to dark yellow.  When reintroduced, they were finished in a heavy gloss blue/black paint as you can see from the example bottom right.  The colour is similar to the UK production (although obviously they aren't stamped Made in England), but the thickness of the finish is also easily spotted. 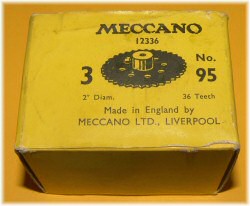 I have a bunch of pictures of post-war boxes which I'm sorting out now...  if anyone has any not in the yellow boxes that would be interesting...

Note: There are many other variations on the above nickel plated parts shown in DMS/EMP, but for the moment I've left them off pending photographs of all the variations shown.  Whereas there are documented variations like "no holes", "two holes", and so on, it's not always clear about the tooth shape, tapping, or whether the boss is nickelled or not.  Hopefully we will be able to find most documented variations and no doubt some more too, which will be added to the table as and when they are found.  Those parts that are suspected to exist are marked with a question mark above.  The proposed numbering scheme is: .ni = 'ordinary' single-tapped parts, .ni1 = as .ni but double-tapped, .ni2x = "variant" single-tapped parts, .ni3 = half-inch bossed parts, .ni4 = rounded teeth parts, .ni5 = semicircular teeth parts.
All nickel-plated sprocket wheels have nickel-plated bosses unless identified as brass above.
²  The only two-hole sprocket part 95 found so far looks very much like the holes were drilled at a later date, as noted in "variations" above.  Until we find another example of this, it's not likely that this is a genuine part.
³  This appears to be a black sprocket overpainted dark yellow, using up the old stock of parts. There's no reason why other sprocket sizes might not turn up painted this way.