All sorts of pulleys in a whole lump of colours!
All images on this site are copyright. This particular image belongs to the
webmasters, and you may copy it for your personal use, or for a non-
commercial website - if you credit the source. All other rights reserved. 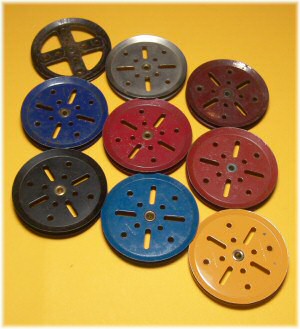 The very first of these pulleys had four separate spokes, rather like an enlarged version of the 2" pulley.  You can see an example at the top left of this photograph.

For a while the part was one of the few with a larger ½'' boss (as kept on the 3'' sprocket and 6'' pulley), but that was replaced with a standard 3/8'' boss in 1928.  As you can see from this photo though, the part has been through many colour combinations, including several reds and a couple of blues.

Three groove widths, wide (28-41), medium (pre-28), narrow (post-war)
All images on this site are copyright. This particular image belongs to the
webmasters, and you may copy it for your personal use, or for a non-
commercial website - if you credit the source. All other rights reserved.

Other than colour variations there is one major difference over the years: the width.  There appear to be five different widths for the 3'' pulley over the years:

Most 3'' pulleys have the standard brass 3/8'' boss.  Some early nickel-plated pulleys were plated after adding the boss, so the boss is nickel-plated too.  The earliest brass bosses are longer than the later (post-1930) ones. During the early 20's, however, they had a larger ½'' boss, also brass but occasionally overplated with nickel.  During the start of the war, pulleys were also made for a short while with a 3/8'' boss made of Mazac (an alloy of zinc and aluminium).  This dates from 1940/41 or perhaps even later.

It will be seen that early pulleys were made from two different stampings, one has four rivets which pass through four holes on the other side of the pulley and hold the pair together.  Stampings on these pulleys are often on only one side, and then the boss is added.  From around 1928 or perhaps later, the pulleys are made from two identical stampings, each with two rivets passing through the other side.  The markings on these pulleys are generally identical on both sides of the pulley.  There are some difficulties here – the example of the 19b.re shown below is believed to be mid-30's by its width and colour, and yet is asymmetrical and so doesn't fit with the other examples.

Earlier pulleys are in fact slightly less than 3'' overall diameter.  They tend to be approximately 2 31/32'' (about 75mm).  Later pulleys, from the 30's onwards are 3'' overall, just over 76mm.  It may be that this variation coincides with the symmetry change above.

Round and square holes in the centre of pulleys
This image does not belong to the webmasters and is copyright.
Please do not download or copy it for any purpose. It has been
kindly provided for use on this site by the image owner,
Clive Weston 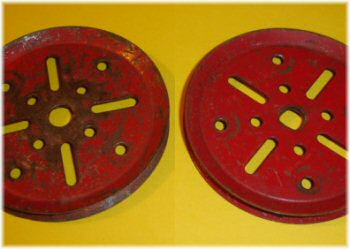 In the "don't try this at home" department, Clive Weston has noticed that early red pulleys are found with both round central holes and slightly rounded square holes. This variation is presumably part of the developments in securing the boss of the larger circular parts, and the asymmetrical stampings would also tend to date these parts to the late 1920s. See the discussions on the central hole in the hub disc (part 118) and the boss changes to the sprocket wheels (part 95) for more related information.

¹  This very rare dark blue 19b is overpainted from dark yellow, including the boss, and found by Rob Mitchell.  It appears to be genuine, and John Ozyer-Key agrees. Does anyone else have one of these we could confirm for sure?