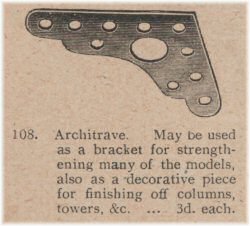 As can be seen from the picture at the top, the corner gusset didn't change in design at all from the first nickel version to the last French one in the 1990's.  It was originally called an Architrave, and the picture to the right is one of many in the early manuals and parts lists that shows a version with a circular hole in the middle.  This part is even visible in some models of the era, but it is almost certain that this version was never produced.

The old photograph (presumably of a prototype part) continued in price lists and parts lists until at least 1920, which is a good example of how careful you have to be with Meccano literature.

Not a Meccano part, this is a Primus equivalent 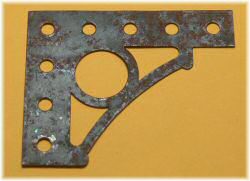 Here's a common one – something that looks surprisingly like the original style of Architrave announced in the Meccano Magazine and shown in the early price lists.  In fact, this part is Primus Engineering, and predates Meccano's introduction of the Architrave.  It's fairly common in early Meccano collections, and often confused for the early Meccano part.

Personally, I wonder whether Meccano copied this part fairly closely from Primus, and made prototypes for their early models and manuals.  Did they modify the production design to avoid trouble from Primus? 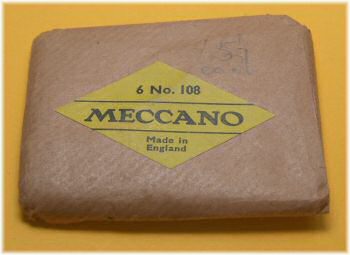 The photo to the right shows a dealer pack of six corner gussets, in medium green.  The label doesn't have the newer five-digit product code, which dates it before 1954.  It is thought that the sharp-cornered diamond dates from 1950 or before – later ones have rounded corners.

Outfit 8 (the first to include the corner gusset) was available in 1947, and so the parts are most likely from between these two dates.

Note:¹   This part changed from dark red to dark green at some point in the dark red/green period, in the same way as the small triangular plate part 77. Some dark red parts are found stamped MFEA, dating them from early in this period.  Dark green ones appear to be found only stamped Meccano, taking them to the end of the period.
Please send us pictures of missing parts! Hints and tips for pictures
Take a picture of the part in very good light, preferably on a plain yellow background, without a flash but with a tripod.
Ideally, trim the picture to about 150 pixels per inch of the Meccano part (unless the part is particularly big or small), save it as a reasonably good quality jpg file with a filename of exactly the part number, for example 19b.ni1.jpg, and email it to us by clicking on 'Contact us' at the top of the page. Thanks!