Triangular plates, part 76 to the left and 77 to the right 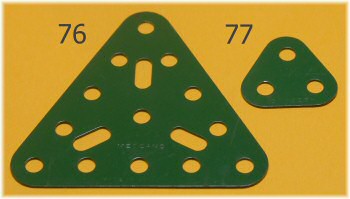 It's very unusual to get a 60 degree angle in a Meccano part, and because of this these parts can come in particularly useful for spacing holes at a quarter-inch spacing (half a hole).  Most of the large triangular plates also have three slotted holes, which can be used along with the edge holes to provide all sorts of spacings for unusual gear combinations.

The small triangular plate is extremely useful as a robust attachment point next to a strip, in addition to being able to have a hole at a quarter-inch spacing.  In the early outfits 7 and L, there were ten of these handy parts, but this was sadly reduced to four in the outfit 10 from 1937.

The large triangular plate started off with holes only around the edge.  These are very rare as they date only from around 1919.  In 1920, the central hole was added, and in 1921 the three slotted holes were introduced.  This part didn't change in design after 1921, and the small triangular plate didn't change from its introduction.

One thing that part 77 is unusual for, is that it was supplied both in dark green and in dark red during the late 20's.  The dark red is by far the most common, though. 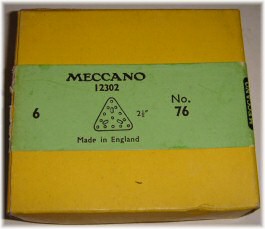 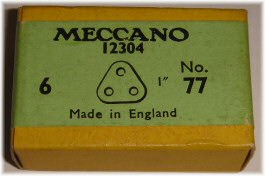 The parts above are light green, dating from 1958-64, as identfied by the light green labels on yellow boxes.

Note: ¹  The rarer zinc plated parts have varying introduction dates, sometimes considerably later than the start of zinc plating on the more common strips in 1966.