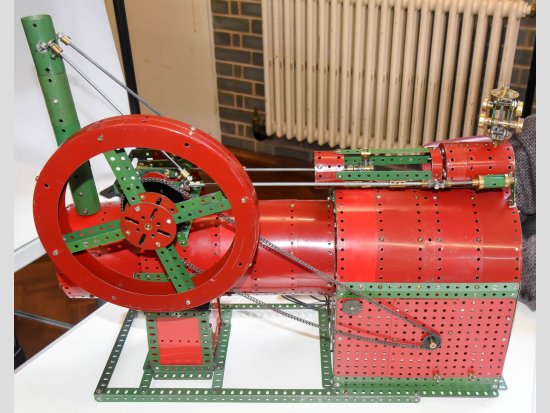 Tony Wakefield began the tour of models with his version of the No. 10 Outfit Overtype Stationary Steam Engine and Boiler. There had been numerous challenges along the way. Strip Plates had to be rolled carefully to produce the boiler case. Curiously, the piston rod was somehow required to pass straight through the shaft driving the governor. Tony has re-located the governor. Members concluded that the model, in its day, built from an outfit costing several week’s wages, would have been something of a disappointment. 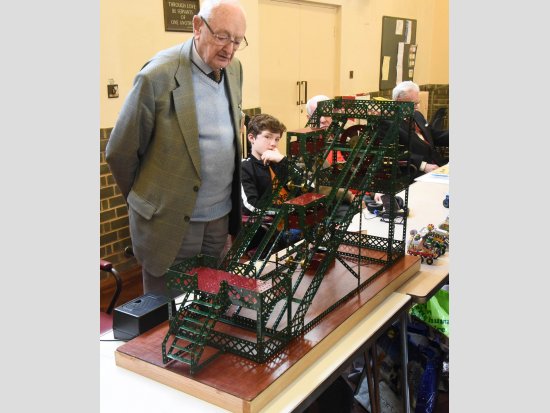 Geoff Bennett had met with similar frustration when building the nickel-plated Supermodel Funicular Railway seen at our last meeting. Today the model reappeared in red and green, with many satisfying improvements. Scaling had been corrected, to avoid 9-foot humans on the stairs and pygmy passengers; railing height was reduced; cars are hoisted by cables instead of sprockets and chain; claw-brakes are represented, guarding against cable failure. Very neat, uncomplicated automatic doors were fitted to the carriages. Best of all, in the writer’s opinion, was Geoff’s use of a centrifugal switch to control the cars. In operation, a push-button bridges that switch, allowing the motor to rotate. As it spins, contacts are forced closed, maintaining motion without the push-button. When the carriages reach the end of the line and press against the platform, this extra load causes the centrifugal switch to disconnect. This is also an excellent safety device, if any spectator should get a finger caught in the machine. 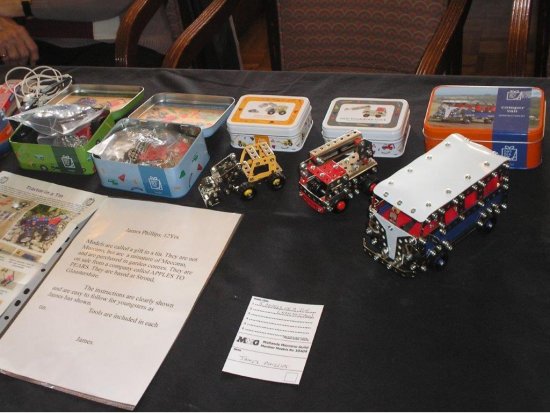 James Phillips showed us a number of models built from attractive tin box outfits available from certain garden centres for £8 - £11, branded Apples to Pears. Among the models were a fork lift, tractor, excavator and crane. 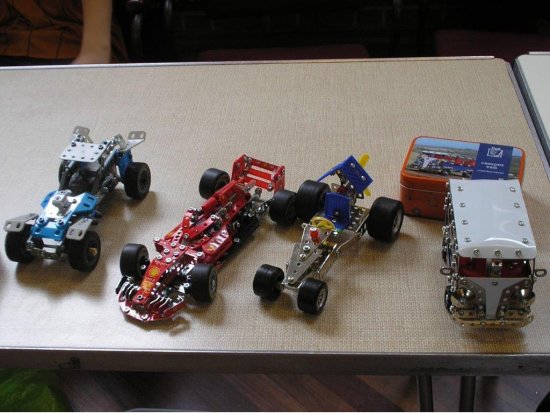 Dave Phillips had built a new model blue racing car kit bought from John Lewis stores, around £39. Rigid plastic components seemed of similar material to those found in the recent Meccanoids outfits. Dave also displayed a red Ferrari kit, which had been quite awkward to assemble. 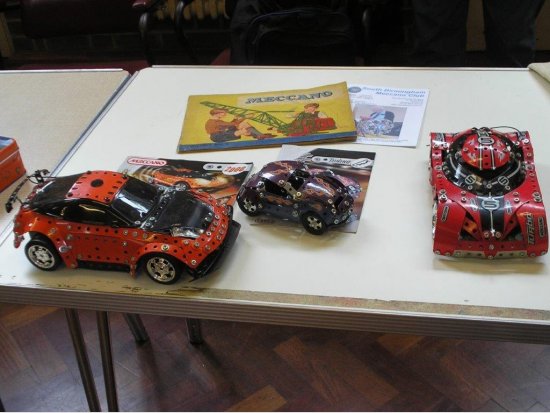 John Palmer had recently found two radio controlled car kits (circa 2006) in a charity shop, priced at £5 and £3 without the transmitters. Even so, still a bargain. The red car has parts very close in shade to 1950s mid-red. 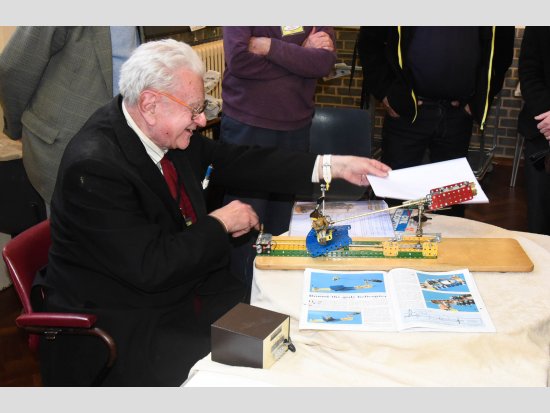 Dennis Backler has completed the Round the Pole Helicopter designed by Mike Hooper (CQ 109, September 2015). Dennis finds the craft challenging to fly, but the variable DC power supply has helped, since it has PWM (pulse width modulation) and smoothing superior to that found in more traditional transformers. In order to reduce vibration, Dennis had taken time to balance the propeller blades’ weight and match their pitch. Any electrical cables had been well-concealed: the boom arm was a hollow brass tube containing a plastic-covered aluminium rod within; the central post was a Keyway Rod with a wire hidden in its slot. Dennis has extensive notes which might help would-be constructors. 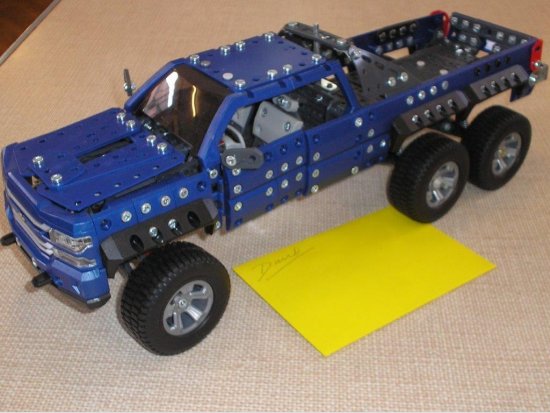 Dave Bradley had purchased two of the blue Chevrolet Silverado pick-up truck kits and combined the contents to produce an extended six-wheel version of the vehicle. Dave was able to redesign the rear suspension for a neater appearance. Under the lifting bonnet, the engine detail was quite pleasing, members agreed. 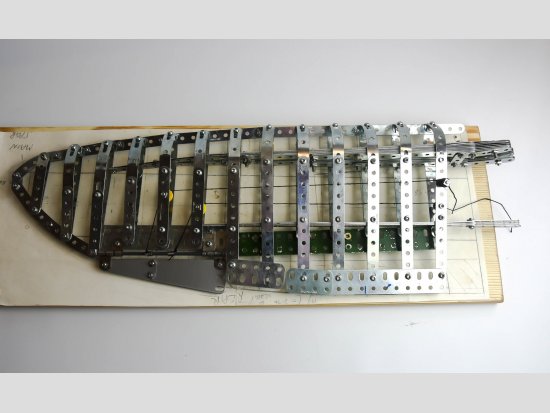 Ken North continues to make progress with his large Spitfire. In order to achieve the desired compound curvature of the wings during construction, Ken screwed them temporarily to pieces of wood. It was vital to provide a strong main spar, to attach the wings to the fuselage. Spitfires were vulnerable to damage here, Ken heard, from the former aircraft crash inspector, Meccanoman Pat Briggs. At the age of 16, Ken sold a used Rolls Royce Merlin engine for £5! 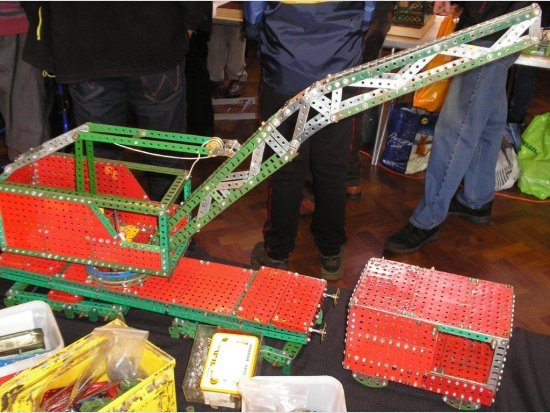 Paul Hubbard has brought his Railway Crane, presently under construction. It was designed by Tom McCallum, based on the crane seen on some Accessory Outfit box lids. Paul also demonstrated a horizontal steam engine built from a manual. 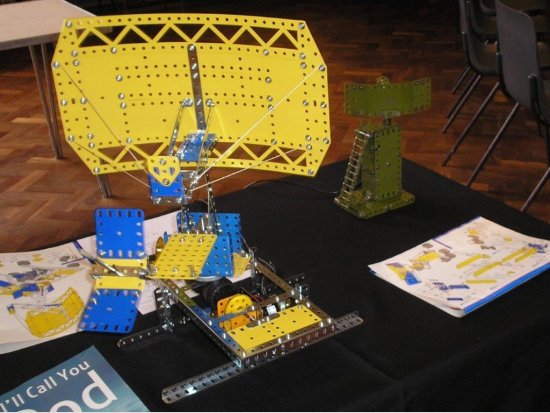 Back in the 1990s, Roger Burton won a No.6 Outfit of that period in the Skegex raffle. The outfit remained unused until recently. Roger was inspired by Ken Senar’s autobiography (I’ll Call You Pod) to construct the revolving radar scanner. The Outfit’s motor, and limited reduction available, resulted in rotation at an excessive speed. Roger cured this with a Faulhaber geared motor. The final drive to the rotating scanner consists of a 2" Pulley resting upon rubber driving wheels. A more satisfactory drive was achieved by replacing the pulley with a zinc-plated Wheel Flange. Roger also showed a smaller khaki radar scanner tower of his own design. 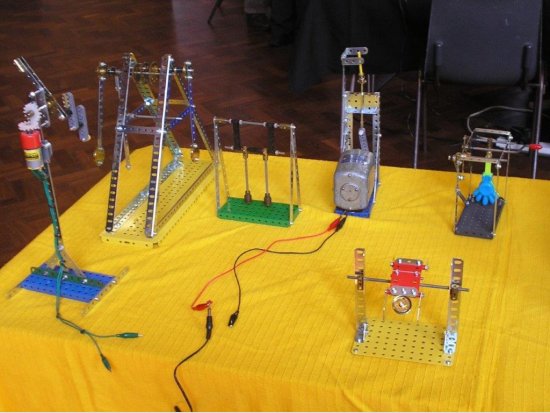 Tim Martin demonstrated four pendulum-themed models. The first, consisted of two pendulums swinging on shafts connected by gears giving reductions of 2, 3 and 4:1. It was shown that when rotated, a number of positions for stable and unstable equilibrium are possible. Tim was drawn to the by the mathematics involved in proving this. Next a motorised compound pendulum, which behaved in a complex, but not random manner. A third device, driven by a more powerful motor, succeeded in balancing an inverted pendulum, using timed vertical strokes. Then a double pendulum, with more weird behaviour. Tim had created high-jump athlete performing the Fosbury Flop styled jump, first seen at the 1968 Olympics. Inspiration for this came from a 1950s Meccano Magazine model of a conventional high-jumper. 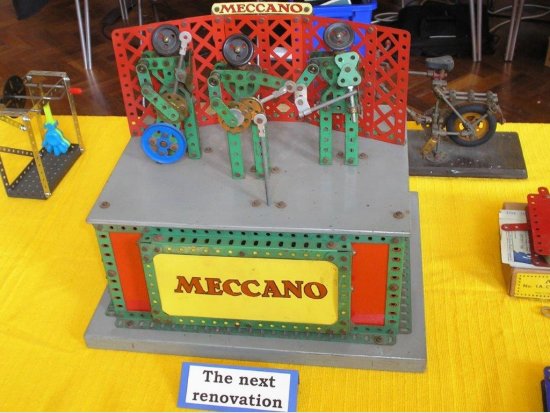 Jim Gamble showed us a dealer’s display band of musicians in the early stages of restoration. Bass, banjo and fiddle player perform on a neat stage. Jim had acquired a pre-war model bike mounted on a wooden plinth. The bike was remarkable for the number of couplings and other brassware consumed, easily £70 worth at today’s prices. Last a selection of out-of-the-ordinary clockwork motors: an unused 1946 1A motor in red; a nickel-plated motor with red lever, thought to have been repaired at Binns Road, and a blue motor circa 1935, with a green lever. 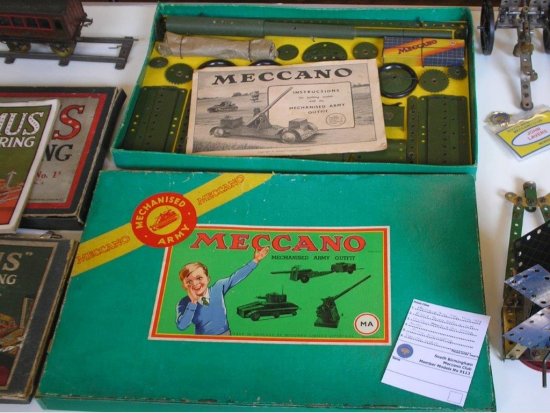 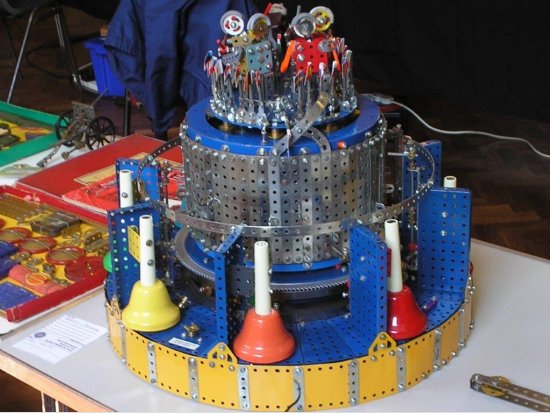 Chris Shute presented his Brexit machine, an attempt to portray the current political impasse. The machine is activated by pressing a slide-piece (Article 50). A vertical 64-strip drum causes children’s hand bells to chime the European Union anthem (Beethoven’s Symphony No.9 in D minor, Ode To Joy). Atop to drum, various figurines appear to be fighting, surrounded by the 28 EU flags, until, on the last note, the union jack falls. The music fitted conveniently within the 64 notes, leaving silence just before and after the performance.

Abdurrahman is building the manual model 5.11 Gantry Crane, in red and green. Sid Beckett has been helping by producing some sub-assemblies, which can be copied by Abdurrahman. This is better than trying to follow the old manual instructions. (Shown left side of photo below)

Inaaya operated her model 4.2 Tower Crane, in Blue and Yellow. The original design used Multi-purpose Gears for slewing the crane, which was not satisfactory. Inaaya has replaced the MP gears with a Worm drive, to give a smoother reduction and more precise control of the tower, as it rotates. (Shown right side of photo below) 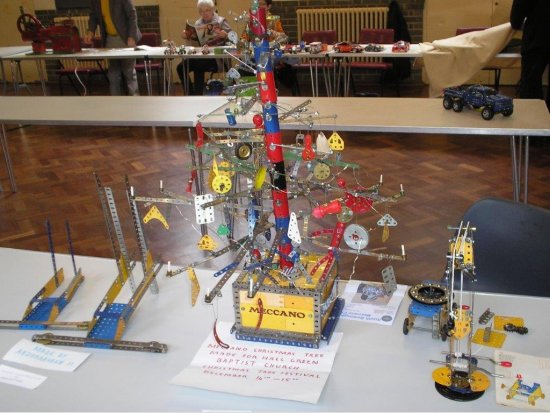 Sid Beckett showed his Meccano Christmas tree (as seen on the previous newsletter cover). Sid produced the tree to exhibit in Hall Green Baptist Church during their Christmas tree festival, last year. The tree is a complex structure laden with gifts and decorations. 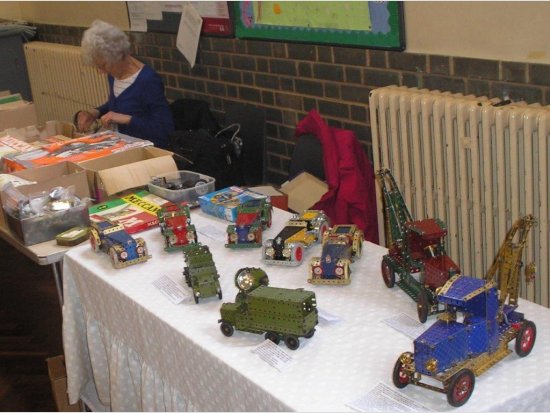 Mick Burgess had an army lorry, originally seen in a 1940 Meccano Magazine, believed to be based on Dinky toy 151B issued a few years earlier. Built in 1970s Army and Combat Outfit parts, Mick’s model has been enhanced by a steering wheel, front seats, rear squaddie benches, tow hook and spare wheel. There was also an open half-track and a searchlight from a 1938 Meccano Magazine. A well-polished Coca Cola can base was used to create the searchlight lens/reflector. Mick is expanding his collection of sports cars (19 so far) inspired by model 4.4 from 1937-47, in various period colour schemes. Each takes about two days to produce, including one with added steering and Magic Motor, shown in the 2018 Spanner Christmas Challenge.