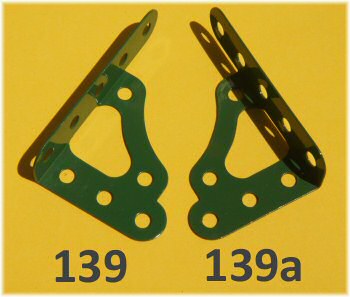 This is a very unusual pair of parts, which have never appeared in any outfits during their lifetime, not even the great pre-war outfits 7 or L.  They disappear from the 1983 French parts list but are back again in the 1995 one.

When the original Radio Receiving outfit was found to breach Post Office rules, it was very quickly replaced two months later (in November 1922) with the New Meccano Crystal Radio Receiving Set.  The photograph from that issue reproduced below shows that it clearly contains two brackets, which are Corner Gussets (then called "Architraves"), part number 108, that have been bent at right-angles. 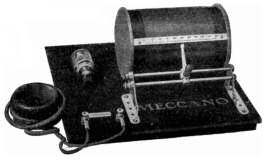 Introduction of Flanged Brackets, May 1923 MM 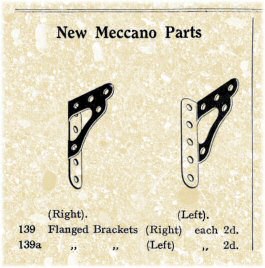 It's pretty easy to remember which is which: place the part down with the 'long' part of the flange pointing up, and the shaped part will point left on the left-hand version and right on the right-hand version.

Close-up of dark blue flanged brackets stamped L and R
This image does not belong to the webmasters and is copyright.
Please do not download or copy it for any purpose. It has been
kindly provided for use on this site by the image owner,
William Irwin 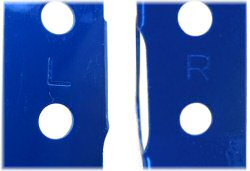 As with the Corner Gusset, there are no changes to this part throughout its life other than the change in finish.

Well, no, not absolutely no changes. The 1978 dark blue flanged brackets are in fact marked with the letters L and R to identify left and right variants. And they say Meccano has only dumbed down recently!

Box of six light green flanged brackets from 1958-63
This image does not belong to the webmasters and is copyright.
Please do not download or copy it for any purpose. It has been
kindly provided for use on this site by the image owner,
William Irwin 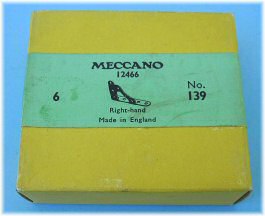 Box of six medium green flanged brackets from 1955-57
This image does not belong to the webmasters and is copyright.
Please do not download or copy it for any purpose. It has been
kindly provided for use on this site by the image owner,
William Irwin 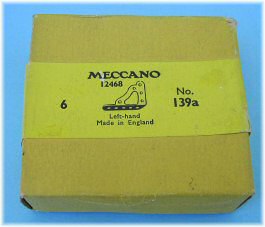