The Christchurch Meccano Club was asked to supply some models for a Christmas window display in the local department store.  Now, the most important thing about a window display is that you must have movement, and you must have lights.  We have models with one or the other, but this display was intended to run unattended for a month or more.  We certainly didn't have anything that reliable!
The easiest thing to build, in the few days available, seemed to be a ferris wheel of some description.  So, here's an example of Meccano Supermodel 33a, the double flyboats.  You can download the supermodel plan by clicking on the image to the right.  LEDs provide the illumination on one of the wheels, and we hope that the motion is limited enough that it might well last the duration without too many emergency callouts for repairs!

What you will need

A very simple build, this one, and mostly it has only very common parts.  The model plan can be downloaded by clicking on the image above – it's about 3Mb and contains eight pages as a compressed folder.  Open it up and drag the contents to another folder on your computer, then print them out.
One of the three supports, showing the use of pairs of part 8 instead of 7a 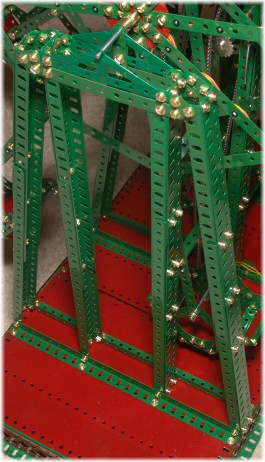 First came digging out the parts.  The rarest parts required are two dozen of part 7a (18½'' angle girder), and the same again of part 103a (9½'' flat girder). The mathematicians amongst you will have worked out that it takes eight 10-outfits to provide these parts.  But never fear, it's easy to substitute them.  You can easily use four dozen of the much more common part 8 (12½'' angle girders), and any combination of flat girders that can be overlapped to fit alongside these 18½'' compound girders. For some areas I used pairs of 9½'' flat girders, but for others I used a 12½'' and 7½'' instead.

The cars themselves use very common parts, but since there are sixteen of them in the double flyboats even they can cause concern! You will need 64 each of parts 4, 5, 6a, and 90a. And a faintly ridiculous 96 of part 48a (2½''x½'' double angle strip).  These are extremely common, but it can still be tough to find quite enough in good condition.  I spent the first morning stripping and repainting these parts to make sure I had enough good ones.

You'll find most of the rest of the parts in a 10-outfit, although you will see later that I modified the model making it require 32 of part 48b (3½''x½'' double angle strip) instead of the original 16.  Add in six of part 113 (girder frame) and you're ready to go.

There are four simple parts to the model:
Car detail, showing extended arms 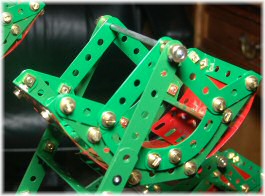 I noticed as soon as I'd assembled one wheel that it wasn't quite as large as I'd expected.  The basic wheel is simply eight 12½'' perforated strips bolted to a face plate.  The supports, however, are very strong and large.  There is 3½'' clearance underneath the bottom of the cars as they come round.  I decided to lengthen the arms by 2½'' each by bolting 5½'' strips at each end (overlapping 6 holes), and using an extra 3½''x½'' double angle strip (just visible in the bottom of the picture left) to maintain the rigidity.  You can see this extension in the picture of the car above.  There is a clearance of an inch at the bottom of the wheel once this has been done, but importantly it adds 5'' to the wheel diameter, and therefore the completed wheel has an area over 40% larger than before.

It would be quite possible to extend this further, by perhaps three or four more holes.  Clearance at the bottom could be created (if you're using strip plates) by curving them such that the base under the wheels was concave.  Adding this much extra length to the arms caused them to be visibly too far apart, but there is then room to add intermediate arms reinforced by more 5½'' strips to give 16 cars per wheel.  This really would make the model a giant, and it might be something to attempt later. For now, making 32 cars was beyond what I had time for!

View of entire drive mechanism.  The worm is on the motor shaft 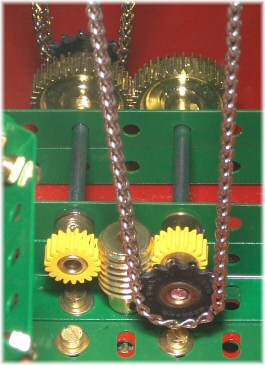 The model plan calls for a large Meccano motor mounted alongside the model, and a complex drive arrangement across the base.  In addition, it suggests a modification to provide an intermittent drive to make the display more interesting.  I very nearly included this, but decided that the additional complexity would reduce the reliability more than I was prepared to risk.  Stopping and starting the ferris wheel puts significant strain on the drivetrain and sprocket chain.  Continuous running takes very little effort.

The photo to the right shows the drive mechanism I ended up with.  The model is driven from one of the fine small geared motors available from Meccparts, this is the 167rpm model.  It's ridiculously small, so can be mounted vertically underneath with the worm gear on the drive shaft.  The two plastic pinions are driven in opposite directions, balancing out much of the force on the worm gear, and the two small sprocket wheels drive the wheels directly through 3'' sprocket wheels at the top.  This 4:1 reduction added to the 19:1 reduction of the worm/pinion gives a final speed around 2rpm, just under 30 seconds per revolution.

The plastic pinions keep the noise down, and are designed to be sacrificial – if any gear is going to fail it should be these ones.  However, they've lasted well so far! The two 1'' gears on the far end are also in mesh, and appear superfluous.  They balance the driveshafts and in doing so prevent the drive from failing due to either pinion slipping on its axle.  I have no idea whether this is worthwhile, but it does seem to quieten the drive quite significantly. 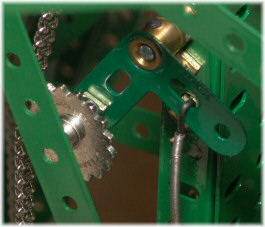 The final drive is through a very long sprocket chain indeed – each one is around 42'' long, more than a whole part 94.  To maintain tension, 1'' sprocket wheels are installed on bell cranks to act as jockey wheels.  The jockey wheel is pivot bolted to one end of the bell crank, and the bell crank pivots on an axle held in a crank bolted to the central support.

A short piece of spring cord with hooks at each end maintain the tension on the jockey wheel.  This wheel is installed on the 'slack' side of the chain, near the top.  That way, the jockey wheel guides the chain back on to the large 3'' sprocket at the top of the wheel.

The lights are 3mm LEDs, which can be bought with small black plastic LED holders. These holders are designed to fit into 4mm holes, which is rather conveniently exactly what we have in the Meccano strips.  It is easiest to fit all of these into the wheel before mounting the wheel into the supports.

When wiring LEDs, you should have them in parallel with a resistor next to every LED.  It's naughty but possible to wire identical LEDs in series, which is what has been done here in order to reduce the amount of wiring on the back of the arms.  If you're going to do this, make sure all LEDs are from the same batch.

In this model, four LEDs in sequence are wired in series, across 12V.  These ultra-bright white LEDs have approximately 3.5V drop across each one.  Check the voltage for the LEDs you use – many LEDs only use 2V which will mean you'll need more of them.

Electrical contacts to the commutator and axle 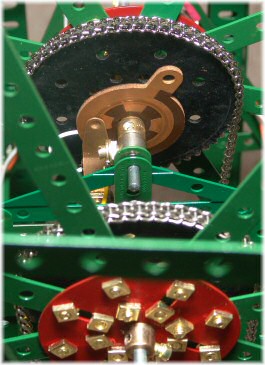 The legs of the LEDs are simply bent over and soldered together, and a wire connects the first and last one to the positive connection.  The negative is wired to the central legs of the run of eight LEDs.  This makes two 'banks' of four LEDs for each arm.  Make sure that the LEDs all point the correct way – four towards the centre of the wheel and four away from it.  It's best to test each LED after it's mounted and before you solder them, just to make sure you have everything the right way round.  All of these positive and negative wires are soldered together in the centre of the wheel, and the negative is bolted to a fishplate mounted on a collar.  Thus, the negative terminal is supplied by the central axle.

The positive wire is run through a hole in the 3'' drive sprocket to an electrikit commutator mounted on the same axle.  You can see the contact on the commutator in the picture to the right.  The negative supply is bolted to the boss of a crank mounted on the support, with a nut preventing the bolt from going too far into the crank and stopping the axle turning.

The LEDs and the small motor give an almost unbelievable final load of only a little over 100mA.  It runs happily on a small plug-mounted transformer, and the LEDs are surprisingly bright.  So far, the model appears fine after a few days continuous running.  We shall just have to see how it lasts for an entire month on show!

Update: The model happily ran for around 8 weeks continuously (night and day), with only one instance of the sprocket chain falling off.  This might well have been caused by someone bumping into it.  It was then parked in a room for most of the year, and performed for around 10 weeks continuously the next year.  The only "repair" work required was to take a link out of each chain – such a long length will always tend to stretch with use.  However, I can report that the model is extremely reliable and can be run for weeks on end without attention.