The set screw is not shown as being included in any outfits (apart from two in the Clock Kit 2 of 1972-77), but of course a certain number were supplied in each outfit already attached to the pulleys and bush wheels. 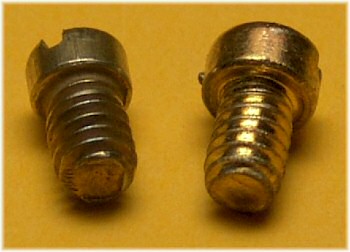 The early Meccano nuts and bolts were considerably longer than later ones, around 5/16" (8-9mm) long under the heads.  When bossed parts were introduced in 1912, these bolts would have been far too long for fixing the bosses to axles, and so the set screw was born.  Much shorter versions (about 5/32'', or 4mm) of the same design of screw were supplied with the wheels and pulleys in all outfits.  The part, however, had no number until around 1916, when it became known as part number 69 (the next available number).

These parts were never supplied in their own right in the outfits, but were attached to the bosses of parts.  Pulleys and wheels with these set screws began to be supplied attached to pieces of card to hold them in place for display.

About the Meccano screw thread

In common with many similar engineering shops, Meccano decided to manufacture their own bolts soon after they started manufacture in 1907 (early MME parts were manufactured to order by other companies).  Most Meccano bolts are "thread-rolled", that is, the bolt blanks are formed with the head from a bar and then rolled between two plates carrying the thread pattern.  This makes the strongest thread with little effort, but leaves the end rather rough as in the examples above.

The alternative is a machined thread.  It appears that early set screws (see the nickel one below left) were machined – you can tell from the finished-looking end.  It is also possible (though less common) to machine the end in this way after cold rolling the thread.  In later outfits, the only machined bolt was the special shouldered bolt part 140z, which would be too complex to manufacture by cold rolling. 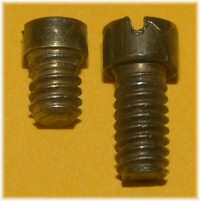 It is extremely difficult to date set screws, because they were so often removed and replaced with other bolts when the Meccano was used.  Many Meccano users in fact are unaware of the difference between the set screw and the ordinary bolt, part 37b.
Nickel-plated set screw from 1919

What is certain is that the very early set screws were similar in style to part 37b, but around half the length of the (then very long) standard bolts.  A pair of these are shown right.  Nickel-plated ones were also supplied, it seems to match those parts where the boss was also nickel-plated.  Part 69.ni shown to the left and in the table below was supplied with a nickel-plated face plate in the Inventor's Outfit B of 1919, for example.

In the late 20's, there appear tiny dome-headed set screws, matching the dome-headed bolts of the era.  However, it seems that these were not supplied throughout the period with all bossed parts.  In many examples of sets from the late 20's (with dome-headed bolts), most of the set screws are cheese-headed and only the occasional one has a dome head.  Further research is needed here.

From the 30's, the set screws are longer, until they are pretty much the same length as the standard bolt (now much shorter than before, of course).  The only significant difference is the diameter of the cheese head.  Set screw heads are just under 5mm diameter, ordinary bolts around 5.5mm, the difference is normally less than 1/32'' so can be tricky to spot.  The similarity is clear from the picture at the top of this page.

Brass set screws and shouldered bolts alongside zinc
bolts from a late 60s Outfit 8
This image does not belong to the webmasters and is copyright.
Please do not download or copy it for any purpose. It has been
reproduced from Spanner with permission from the image owner,
Martin Hanson 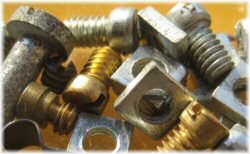 Then it gets more interesting.  Around 1964, when colours changed to silver/yellow/black after the takeover, set screws changed to nickel.  Then around 1966, with the general change to zinc plating, they changed for a short time to zinc plate.  But very soon after, perhaps 1967, they changed back to brass plated ones.  The picture to the right shows the contents of a late 1960's outfit 8 small parts box.  The brass set screws and shouldered bolts are supplied alongside zinc plated nuts and bolts.

Label inside outfit 7 small parts box from late 60s
This image does not belong to the webmasters and is copyright.
Please do not download or copy it for any purpose. It has been
reproduced from Spanner with permission from the image owner,
Martin Hanson 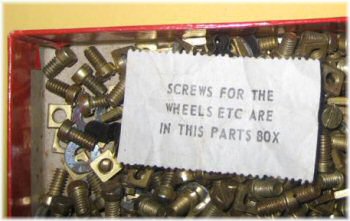 In addition, the set screws were removed from the bosses and placed in the small parts boxes for most smaller outfits.  The reason for this is pretty obvious when you look at the boxes; instead of the holes in cardboard stringing cards the plastic trays introduced in the middle of the light red/green period had oversized boss holes into which the set screws would fit in any direction.  However, with the change to expanded polystyrene trays during the silver/yellow/black period this was no longer possible.  The polystyrene trays are designed with boss holes exactly the size of the bosses, to hold the parts tightly.  Thus it was not possible to have the set screws fitted into the bosses.

1970s multi-lingual label showing set screw location
This image does not belong to the webmasters and is copyright.
Please do not download or copy it for any purpose. It has been
reproduced from Spanner with permission from the image owner,
Martin Hanson

The early label shown above applies to the end of the 1960's, replaced by the multi-lingual label shown right.  There are three further languages on the reverse of this label.

Note that this doesn't apply to the late 60's outfit 9, nor the outfit 10 even in the 1970s.  Since these outfits were still strung to the same design of card, the set screws are still placed in the bosses.  Pictures of mint outfit 10s from the early 1970s are shown in the gallery on this site, with brass set screws in each boss.

In the 1970's it appears that set screws disappear completely.  Most smaller outfits were supplied with standard bolts throughout – someone who knows more about this era will be able to help us with dates, I'm sure.

However, zinc set screws did make a comeback at the end of the outfit 10's life – an outfit 10 from 1992/93 (at the very end of production) has a mixture of nickel-plated and zinc-plated set screws, stored separately from the wheels.

Two types of early set screws
This image does not belong to the webmasters and is copyright.
Please do not download or copy it for any purpose. It has been
kindly provided for use on this site by the image owner,
Ed Barclay 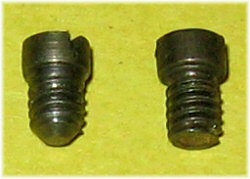 To the right, Ed shows out to us that there are two clearly different designs of the early set screw – one machined and one with a cold-rolled end.  Anyone got some more information about these?  Dates?  One would assume that the machined ends are earlier and it was soon realised that the machining was not necessary for the job.

It's probably not unreasonable to make this a separate type in the table below.  However, we need to be certain that they are both genuine Meccano parts.  You can see, though, that the machined end is also found on early nickel-plated set screws from the photo above.

Dome-head set screw next to standard bolt
This image does not belong to the webmasters and is copyright.
Please do not download or copy it for any purpose. It has been
kindly provided for use on this site by the image owner,
Ed Barclay

And below that, he also sent a very unusual dome-head zinc plated set screw from the 60's.  At least, it looks like a set screw, and the design is very different from the standard bolt (shown to the left).  Is this a one-off or a genuine variation? 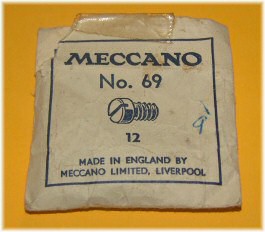 Set screws in a plastic bag, ealy 1960s
This image does not belong to the webmasters and is copyright.
Please do not download or copy it for any purpose. It has been
kindly provided for use on this site by the image owner,
William Irwin 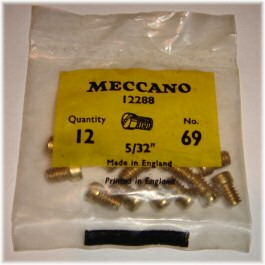 Set screws in a plastic bag with label, 1970s
This image does not belong to the webmasters and is copyright.
Please do not download or copy it for any purpose. It has been
kindly provided for use on this site by the image owner,
Mike Shaw 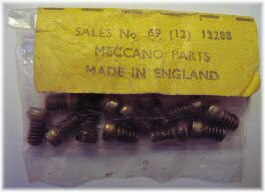 Above left is shown a pre-war paper envelope of set screws, part 69.  These were also supplied early post-war, subsquently replaced by the small yellow card box common to the 50's.

By the 60's, spare parts were supplied in plastic bags as in the examples to the right.  The earliest examples seem to have been the pre-printed plastic bags for common parts such as nuts and bolts (and set screws!). These exist from the early 1960's, certainly. Blue labels arrive in 1964, after the takeover by Lines Bros. From the 1970's, plain plastic bags with yellow or white stick-on labels (such as the one shown lower right) appear. These yellow and white stickers show the full postcode for the Binns Road factory (L13 1DA) – the full postcodes only started being allocted in 1967, and were almost certainly not in use in Liverpool until at least 1970.

Note:  ¹ The solid brass short set screw is very unusual, date unknown.
² Although nickel and zinc plated set screws were supplied in many outfits, at some point around 1967/68 set screws reverted to brass, and can't be distinguished from part 69.br