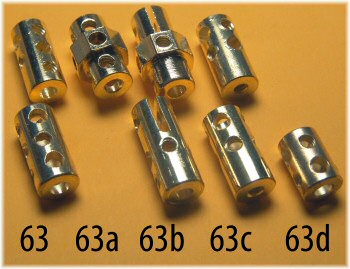 The photo to the right shows the various different types of couplings.  The top row shows the earliest type of each part, and the bottom row the latest versions, as used post-war.

In 1940, the useful but expensive octagonal coupling was discontinued.  In 1954, the new short coupling part 63d was introduced, but was never supplied in any outfits.

There are two major changes in the couplings.  The very earliest ones had only two transverse holes, as shown in the patent application (close-up shown right).  From 1919, the coupling gained the third transverse hole, but was still single-tapped of course.  In around 1925, the couplings became double-tapped (earlier than most bossed parts), and this part remained almost identical from that point on.
Stamping on a 1920s coupling 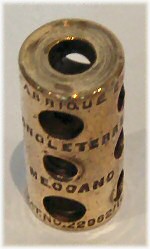 The other way of identifying earlier couplings (other than the holes and tapping), is by the stamping that is shown on each part.  A full list of the stampings found to date, by John Nuttall, is given in a table in the "Variations" section below.

Briefly, we can make the following conclusions. Stampings on a coupling date the part from after 1919, but pre-war. There are no stampings on the earliest two-hole couplings. FEA dates a part from 1921 up to around 1929. It also seems that only the single-tapped versions of the coupling are stamped on the end, and perhaps we can try to draw a conclusion that this is the earliest type of stamping (and thus this may help us with dating collars and threaded bosses that are end-stamped).

During the later part of WW1, an 'economy' version of the coupling in a zinc alloy (63.zn below) was produced for a short while.

Couplings with the central transverse hole only part-way through
This image does not belong to the webmasters and is copyright.
Please do not download or copy it for any purpose. It has been
kindly provided for use on this site by the image owner,
Ed Barclay 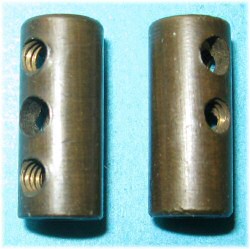 Ed Barclay, always one to throw a spanner in the works, sent this picture of what is probably a mistake in a pair of early couplings – the transverse holes only goes to the centre of the coupling, not all the way through.

Thanks very much to John Nuttall for starting this list, which has been extended by the author and Clive Weston. Tell us if you have any more!

The following table is an attempt to show some of the different stampings found on pre-war couplings. Please contact us if you find any more, or if you believe one to be more or less common than shown.

Spare parts boxes for parts 63b and 63c
This image does not belong to the webmasters and is copyright.
Please do not download or copy it for any purpose. It has been
kindly provided for use on this site by the image owner,
William Irwin