A very complex part number, with several changes and renumberings, makes the hook one of the most tricky parts to accurately classify. Let's start with an overview...

The five different hook parts and their main variations
All images on this site are copyright. This particular image belongs to the
webmasters, and you may copy it for your personal use, or for a non-
commercial website - if you credit the source. All other rights reserved. 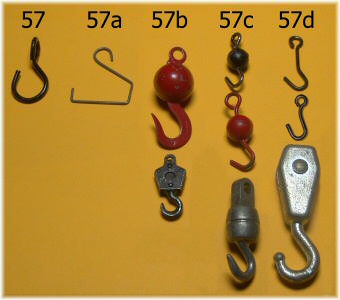 The photograph to the right shows the main variations in the hooks through the years.  As you can see, the parts 57 and 57a have only one main type, and both were only pre-war parts.

The large loaded hook was introduced in 1922, and remained with minor variations until the takeover of Meccano by Lines Bros in 1964.  In the March 1965 price list, part 57b is shown as the large barrel-type hook, but this was changed to 57c in the September price list of the same year, so we can probably assume this was a printing error.  Part 57b is not referenced again until 1969, when the Dinky-type hook was renumbered to this part number.  The 57b Dinky hook was supplied in outfits 1 and 2 (renumbered to outfits 2 and 3 in 1970) from this point until it was dropped in 1978.

Much of this research was originally done by Clive Weston in 2000, by digging through all the known manuals and price lists of the period.

A picture of the new hooks in the old-style spaces.
This is a very early silver/yellow/black outfit 8
This image does not belong to the webmasters and is copyright.
Please do not download or copy it for any purpose. It has been
kindly provided for use on this site by the image owner,
Martin Hanson 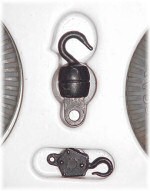 Part 57c was originally the small loaded hook, as shown at the top of the column in the photo.  These small hooks were also dropped in 1965, to be replaced by the large barrel-type hook shown at the bottom of the same column.  From 1966 to 1969 it appears that part 57c was the only hook available as a spare part, described as a Small Loaded Hook, but at the price previously charged for the large hook (part 57b).  It seems that parts 57b and 57c were inconsistently used in the manuals between 1965 and 1969, referring to the Dinky-type smaller hook and the barrel-type larger hook.  In actual fact, the Dinky-type hook was being supplied in outfits 1 to 3, and the barrel-type hook for outfits 4 and above.  The outfit 10 of this period contained three barrel-type hooks (not one large and two small as previously supplied).  It appears that for a time part 57c was the only hook part number available, but the actual part supplied depended upon the outfit number.

For the most part, it is very misleading to refer too much to the pictures in the manuals. These are notoriously out of date and (certainly in the case of this part) do not reflect what was included in the outfits. The spare parts price lists are probably more accurate. The chronology is as follows:

For the sake of clarity, then, we will refer to the Dinky-type hook as part 57b and the Barrel-type hook as part 57c throughout. The May 1965 parts lists incorrectly shows the part number, the September 1965 parts list shows the wrong price, but other than that they are consistent. The manuals gradually show a change throughout this period of printing, to the final situation in the 70's that matches our lists. In reality, the smallest outfit contained the wire hook part 57d, the next two larger outfits contained the Dinky-type hook part 57b, and all larger outfits contained only the barrel-type hook part 57c.

Part 57d has been used for three distinct parts over the years.  Originally it was the plain wire hook as used in the crane grab (part 150), which you can see from the picture is the basis for the later small loaded hooks (with a lead ball formed around it).  This became obsolete in 1940.  In 1962 the part number was reinstated as a simple wire hook, very similar in design but without the long straight section.  This wire hook was supplied in outfit 0 from 1962, but was removed from the parts listing in 1966 when outfit 0 was withdrawn.  The part number remained in some model "parts required" listings.  When outfits were renumbered in 1970, the new set 1 was effectively a reinstated "set 0" of the 60's, and the wire hook part 57d was included in this outfit.

In 1976, the new Crane Multikit featured the new large crane-type hook shown at the bottom of the column. This was originally numbered 57d (in the earliest manuals), but creates its own confusion as this part is shown as part 57a in later versions of the same manual.

Now we have the basics covered, let's look at the variations within each part.  The simple wire hook part 57 was originally flat from the start of the MME period until 1911, when it became twisted by 90 degrees.  Originally plain steel, it became brass plated but for most of the pre-war era it was enamelled black.

Part 57a, the scientific hook, is a part from the HSMD.  It was designed to hang the small disc weights on.  Some versions of this part have the eye fully closed.  It is very simple to make reproductions of this part from piano wire, so we have to be a bit careful.

DMS/EMP shows the early type of the large loaded hook as black, with the eye very close to the ball.  It then states that in 1927 the ball became slightly smaller (9/16'' instead of 5/8''), and both of these are shown in black and red. Very soon after, the ball was lowered on the same hook former, allowing room for the part to be bolted to a strip by its eye.

Early black, later black (with lowered ball), pre-war red
of the same design, and post-war red with larger ball
All images on this site are copyright. This particular image belongs to the
webmasters, and you may copy it for your personal use, or for a non-
commercial website - if you credit the source. All other rights reserved. 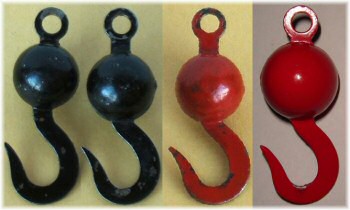 This is partially correct, but not completely. The photograph to the right shows the development of the part. The very first version had the small ball, mounted high up. It was very soon moved down, presumably to allow the hook to be bolted to a strip (as EMP says), and this black version is by far the most common pre-war version; certainly most of the 20's and into the 30's. At a later date (perhaps 1937?) the hook changed to pre-war medium red (third example). The post-war large loaded hook has the ball increased in size from approximately 16mm to 17½mm, with the bottom at the same level as before, and hence the long 'eye' disappears (as the hook uses the same steel former as a base).

It's easy to confuse this increase in size with the early parts where the ball itself moved but remained the same size. Most red (and all light red) hooks are like the right-hand version in this photograph. There are occasional oddities, including a version with an even smaller ball, but these may well have been transitional versions or even mistakes. The vast majority of loaded hooks you will come across are the second and fourth in the photograph above.

Pre-war black 57c, and larger post-war red 57c
All images on this site are copyright. This particular image belongs to the
webmasters, and you may copy it for your personal use, or for a non-
commercial website - if you credit the source. All other rights reserved. 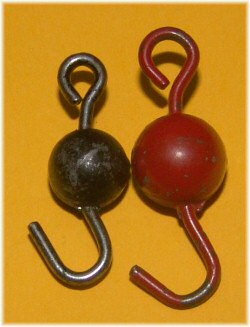 According to DMS/EMP, the early small loaded hook also changed its size, from a 7/16'' ball to 3/8''.  It was available in black and red, and another example is shown as having an open eye and a shorter top section.

Again, from examples studied here, pre-war examples seem to be the smallest (9½mm ball), in both black and red, but by the mid-50's the size of the ball increases to 11mm and the wire base is longer too. This hook is again available in medium red and (from 1958) in light red.

Graeme Eldred points out that this final hook is used (painted yellow) in the Mogul 3299 Mobile Crane. Does anyone know any non-Meccano uses of the Barrel hook?

The wire versions of part 57d didn't change significantly, although there are two versions of the later crane hook.  Originally the central pin was integral to the hook (as shown on the version in the photograph at the top of this page).  Later versions don't have this pin, but have one side tapped to the Meccano thread so that a bolt can be used as a pin.

There are various forms of the Dinky-type hook (57c, later 57b), but we have to be careful which ones we assume are part of the Meccano system.  Since this part was borrowed from the Dinky line, many parts found in Meccano collections could easily be Dinky parts rather than original Meccano ones.  Only unopened outfits can provide definitive answers.

Bag of part 57d wire hook
This image does not belong to the webmasters and is copyright.
Please do not download or copy it for any purpose. It has been
kindly provided for use on this site by the image owner,
William Irwin 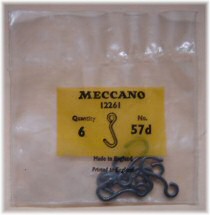 Boxes of light red large and small loaded hooks
This image does not belong to the webmasters and is copyright.
Please do not download or copy it for any purpose. It has been
kindly provided for use on this site by the image owner,
William Irwin

Above are boxes of the large and small loaded hooks (57b and 57c), in light red, dating from 1958 to 1964. The colour is identified by the light green labels on the boxes. To the right is a bag of part 57d, the small wire hooks, dating from the 60's.

Note: ¹  See 'chronogical variations' above for discussion about the barrel and dinky-type new hook designs. For the purposes of this table, part 57b refers to the small Dinky-type hook, part 57c is the larger Barrel-type hook.
Please send us pictures of missing parts! Hints and tips for pictures
Take a picture of the part in very good light, preferably on a plain yellow background, without a flash but with a tripod.
Ideally, trim the picture to about 150 pixels per inch of the Meccano part (unless the part is particularly big or small), save it as a reasonably good quality jpg file with a filename of exactly the part number, for example 19b.ni1.jpg, and email it to us by clicking on 'Contact us' at the top of the page. Thanks!