The three sizes of flanged plates in UK Meccano 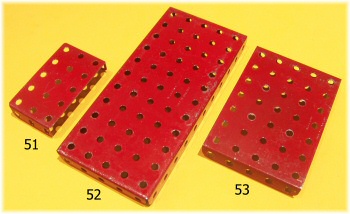 Flanged plates were the first Meccano part introduced that let models be build in a more solid form, rather than being constructed entirely from strips and angle girders.  Early outfits had a large number of these plates, but once strip plates and flexible plates were added, the numbers of flanged plates needed was reduced.

It was immediately realised that the 5½'' x 2½'' flanged plate (part 52) was ideal for use as a base for small models, and one was provided in all the smallest outfits from then on (even the tiny outfit 000 of the early 30's).  Only the Pocket Meccano missed out, using part 51 as its base instead for cost reasons.

The most changed part of this group was part 52, the 5½'' x 2½'' flanged plate.  Initially it was provided with two flanges on its long sides (left-hand example in the above picture).  In 1927, along with the colour change to dark red, the part had a slot and saw-cut added. The sole purpose of this was to allow the building of a saw bench using the new part 159, circular saw.

At the very end of 1927, the flanged plate gained extra flanges at the short ends, making it considerably more useful.  The second and third example in the photograph above both come from a December 1927 outfit, indicating that the changeover was almost exactly at this point.  In 1934 the part changed colour, and simultaneously lost the sawcut and slot (right-hand example).  It is thought that all dark red examples have the sawcut and slot, and a small number of the early medium red (1933-on) ones too.  The "New Meccano" parts in early red (also known as pea-red) from 1926 have no sawcut or slot, and two flanges.

EMP also reports and even shows engineering drawings for early dark red and blue/gold part 51's with square corners on the flanges. This seems to be a mistaken transformation from the flexible plates and strip plates of the era. All blue/gold part 51's have the usual round-ended flanges.

One variation we do have, though, is that right at the end of pre-war production the parts lost their cross-hatching and became plain blue. 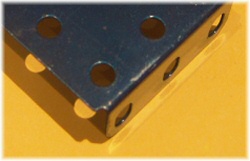 Here's a funny one: a part 51 in a blue anodised finish, but it is stamped Meccano Made in England. This was an experimental finish before the change from blue/yellow/zinc to dark blue / dark yellow, in around 1977. Many parts can be found in this smart anodised finish, just enough to make us wish they'd taken up the idea.

The top row shows two examples of boxes for part 53 (a single part in each box), medium red to the left and light red to the right (with the green label).  Note that the box is the same size as that used for part 52, shown below.

Note: ¹ Part 51 didn't appear in nickel plate, being introduced in 1934. However, outfits and parts could be special-ordered in a nickel finish up to 1941, and for this reason there are a tiny number of nickel plated ones. Part 51.ni is about as rare as Meccano parts get.
² These parts were special order only.