The first of these parts was known as the "Large Bent Strip", included in larger outfits from 1904 to 1906, then dropped and reintroduced in 1910. Well, that's what some listings show, but only on the basis of a single listing supposedly of 1906 which doesn't include it. On the other hand, there is a photograph of a box B in Love & Gamble (p36) with a rolled-edge large bent strip on top of a clearly 1907 outfit, and another picture later on with it easily visible in an outfit 4 of 1909. The large bent strip in rolled-edge tinplate is certainly a very rare part, however.

The chaos of this numbering system was too much. Parts 47 and 48 in the main sequence were available (they had been used for a variety of spring balances and dynometers in the HSMD), and all of the double angle strips were renumbered into the sequence seen above.

The 2½''x½'' double angle strip is one of the most common of all parts, but is very often found bent and misshapen in Meccano collections. Really good examples of early ones are sometimes hard to find. 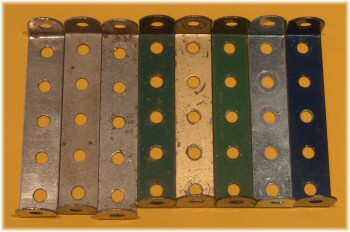 The most important change from the point of view of the Meccano builder is in the overall length of the parts. Some (EMP included) document that all of the double-angle strips can be found with the principal measurement correct either externally or internally. That is, the 2½''x½'' double angle strip is 2½'' overall or 2½'' inside the faces. I haven't found this to be the case. In my experience, almost all nickel-plated ones are longer, sometimes substantially longer, than later painted varieties. This can be seen clearly in the photo to the right.

The examples shown aren't carefully selected parts -- they are randomly chosen. The first three show nickel-plated parts from 1916, 1919, and mid-1920's. The later ones are all identical in length, and cover a range of eras from early 30's to 70's.

Although the nickel ones aren't consistent in length, they are on average significantly longer than later versions by at least a couple of thicknesses of a strip. Early manual models rely on these lengths, and when rebuilding these models with later parts you need to be aware that your double angle strips are likely to be shorter. John Nuttall takes up the story:

Be careful dating with the Meccano Magazine. We can only be sure that the parts existed by that date, but they may well be several months or even years older.

The January '26 MM has the Motorcycle & Sidecar in it. The 48's on the sidecar are clearly the later short type.

The September '25 MM has instructions for a 4-6-2 tank loco. This has a 48a bolted to a 2½'' square plate forming part of the cylinder block. This is clearly the short version. The earlier, longer version would stick out a bit on each side of the plate and in the pictures of this model it clearly doesn't. In the side view, Fig. B, page 449, the lugs of the DAS are hidden behind the plate, showing that the DAS must be exactly 2½'' (or slightly narrower) overall; i.e. the shorter version. Several 3½'' ones in the same model look like the short version, but it's not 100% certain.

I could find nothing earlier than September '25 showing the shorter version of any DAS. It is possible, indeed likely, that different sizes changed at different times and the changeover was staggered over several months. At least for 48 & 48a we can say with some certainty 1925 for the change to the shorter length. This may be correct for all, but some could be 1926. John Nuttall

The table at the bottom of the page assumes 1925 for the length change in all nickel double angle strips.
Radiused (top) and truncated ends on a part 48. 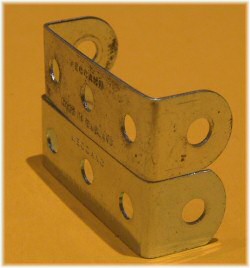 Interestingly, examples of iridescent (1979) part 48's I've seen have radiused ends, which is the only example of part 48 where the ends don't match the ends of the contemporary part 5. Further research is needed...

This leads us to the French part 48a, 2½''x½'' double angle strip. UK versions have truncated ends, which is unexpected as the equivalent unbent strip doesn't. However, double angle strips can be found with radiused ends as seen in this picture, but they turn out to be French ones in the examples I have come across.

Double angle strips in a variety of boxes