The most common Meccano part by far, of course.  It doesn't bear thinking about how many millions upon millions of these were produced, only to be eaten by the hoover.

Meccano nuts and bolts work to a fairly unusual thread pattern, known as 5/32'' Whitworth. The most significant use of these bolts at the time was to attach door knobs to their spindles, which is rather useful to know if you have a house of around that vintage! It was probably chosen as the nearest commonly available mass-produced size that would comfortably fit in the holes governed by the 8swg axle size.

There's a lot more to the humble nut and bolt than you might think, as we will discover...

Four part numbers are on this page, although one of them is a 'combined' part.  Part 37 is a nut and bolt, consisting of a part 37a (nut) and part 37b (bolt).  The table above is slightly confusing in this respect, as they were originally referred to in pairs until the 30s, when they started being counted independently.  Meccano outfits generally contain a few more nuts than bolts (to allow for lock-nutting).

To be absolutely correct, only the 'nut and bolt' existed until around 1912/13, when part 37a (the first part with a suffix) was first mentioned as a part available on its own.  It wasn't until around 1920 that part 37b was also mentioned and available for sale.  As you can see from the table above, even as late as 1929 outfits were considered to include a number of part 37 and a few extra 37a's. 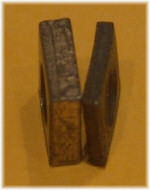 Initially, there was only one length of bolt in the Meccano system, around 5/16" (9mm) of thread plus the head.  The length was needed because of the thickness of the folded-over MME strips, but caused no end of irritation as two bolts would interfere with each other if both were run into an angle bracket or girder.  The earliest ones are easy to identify with a magnet -- they're solid brass and all subsequent Meccano nuts and bolts were plated steel.

A short-lived 'economy' thin nut was produced during WW1, and the comparison is shown here.  These are very weak and as they only hold one thread, difficult to use.  They are often found broken in two.

The 'standard' brass-plated cheesehead bolt is often thought of as one long-lived part, but there is a distinct difference between the pre-war and post-war varieties.  The pre-war has much sharper corners to the head, whereas the post-war is noticeably chamfered.  This has one useful side-effect when dating and identifying nuts and bolts: the blackened steel bolts from the Mechanised Army outfits (1939-41) are also sharper edged than the post-war Korean economy (1951-52) and Army Multikit (1973-1977) black bolts.  This is a good way of identifying whether nuts and bolts included with a Mechanised Army outfit belong there.

There was a change to dome-head bolts in 1929, lasting until 1933 when the cheese-head bolts returned.

During the Korean War shortage of brass and steel, economy nuts were made of a lower-grade steel and are not only black but also extremely brittle and break in two when tightened.  Nuts and bolts of this period were supplied in boxes and envelopes with a turquoise sticker and broken black band to identify that they are blackened steel parts.

Often confused with this part, the set screw (part 69) is shorter and has a much smaller head, but it does come in many of the same variations. 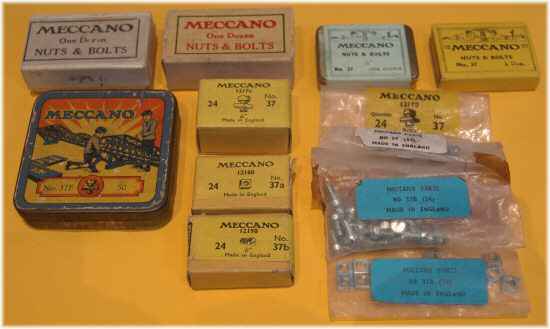 As one of the most critical and losable parts in Meccano, there was always a strong demand for spare nuts and bolts.  These were originally in small boxes like the ones top left (dating from around the mid-20s), and then later moved to the small brass-plated tins with paper labels seen top right.

Post-war morphine tin and pre-war gross of part 37
This image does not belong to the webmasters and is copyright.
Please do not download or copy it for any purpose. It has been
kindly provided for use on this site by the image owner,
Staffan Kjellin 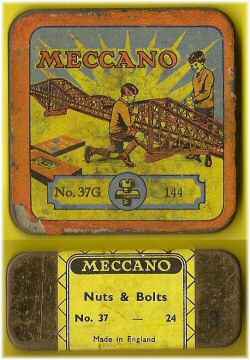 By the end of the 1920s, as well as buying the tins containing a dozen nuts and bolts, there was also a part 37F tin containing 50 nuts and bolts as in the photo above (F stands for fifty), and a 37G containing 144 of each (G standing for gross), shown right.  Both of these tins contain dome-head bolts and are therefore likely to be 1929-1932.

The photo to the right also shows the immediate post-war spare parts tin of nuts and bolts. Note that they are packed in spare morphine ampoule tins (as manufactured by the Meccano factory during the war), and have pre-war cross-hatching on the labels but post-war "Made in England" printed on them.

After this, the standard boxes take over, and now nuts and bolts are available in boxes of two dozen at a time, and also individually as parts 37a and 37b (centre of picture).  These continued into plastic bags in the 60s and 70s with various labels.  Both the blue label and white label bags contain zinc plated square nuts and bolts.