A simple bent or stamped screwdriver was provided in almost all Meccano outfits.  It wasn't much good, to be honest.  Most boys commandeered one of Dad's from the toolshed.  The exception was the excellent longer or special screwdriver supplied in the largest outfits from 1920 onwards.  These are now quite rare, because more often than not Dad commandeered them for his toolshed. 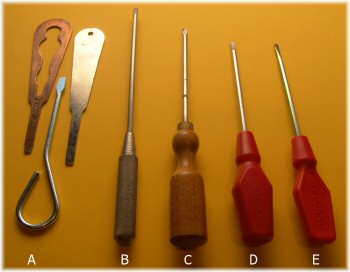 At the left of the picture (marked A) is a range of standard screwdrivers, supplied in almost all outfits except for the extremely small 000 and Pocket Meccano outfits.

The larger or special screwdriver is somewhat more complex.  Initially, part 36a had a wooden handle and was only supplied as a spare part until it was added to outfits 5 and above in 1922.  In 1923, it changed to a long bent rod, not a very elegant replacement.  In 1928, the part 36b Special Screwdriver B, the most elegant of all the Meccano screwdrivers, was introduced and supplied instead of the 36a in outfits 5 to 7, and later in outfits G, H, K, and L from 1934 to 1937, and outfits 8, 9, and 10 pre-war.

The reintroduction of the larger outfits in the late 40's saw the 36b disappear, and a new wooden-handled version of the 36a replaced it in outfits 8 and above (C).  This remained in place until 1975.  (The outfit 8 of the 70's had been downgraded to the contents of the previous outfit 7, so the special screwdriver was only supplied in outfits 9 and 10 in the 70's).

Meanwhile, part umber 36b had been reinstated, as a plastic-handled screwdriver available in the Super Tool Set from 1968 and and new version in the Multikits from 1973.  This went through more than one form, finishing with the pear-shaped version shown at D above.

In 1975, part 36a (the wooden screwdriver) was discontinued, and outfits 9 and 10 instead are shown as having the new plastic part 36b (D above).  In 1978, the standard screwdriver part 36 was discontinued and all Meccano outfits (including Multikits) were supplied with a new flat-handled version of the plastic screwdriver part 36b (E). In fact, the dark blue/dark yellow outfits 9 and 10 of the period 1978-79 were supplied with what was presumably old stock of the thicker version of part 36b (D).

The standard screwdriver went through four major variations, as follows: Comparison with the page for part 34 will clearly show that the combined spanner/screwdriver part 34a comes from the cutout in the two middle variations. The earlier fat 34a is from the triangular form above, and the later thinner 34a from the rounded end form (1916 on).

There are various detailed changes within each of these four major variations, each of which is shown in detail in the table at the bottom of the page.

The 8swg bent rod screwdriver went through some well-defined periods. The earliest versions are stamped "Meccano" near the tip, this disappeared in the mid 30's. The overall length of the screwdriver varies from one example to the next (because of the method of manufacture), but pre-war ones are noticeably longer, around 13cm overall. Post-war screwdrivers are around 12cm or slightly less. The change to a cut-off (rather than pointed) end to the rod happened near the end of the nickel period, some time in the 60's.

The details of variation in the larger screwdrivers is described above and detailed below, but bear in mind that the part number swapped from 36a to 36b through the period (in the major outfits), and in the 70's more than one type of screwdriver was supplied in different themed sets outside of the period in which they existed in the 10-outfit.

Electronic control kit screwdriver from 1970, marked RUBICON
This image does not belong to the webmasters and is copyright.
Please do not download or copy it for any purpose. It has been
kindly provided for use on this site by the image owner,
John Nuttall

This picture shows the small yellow-handled electrical screwdriver from 1970, supplied with the 4EL and 5ME outfits and the electronic control set.  It was given the part number 622, and so is not included in the table of part 36's below.
French Meccakit screwdriver
This image does not belong to the webmasters and is copyright.
Please do not download or copy it for any purpose. It has been
kindly provided for use on this site by the image owner,
Oscar Felgueiras

There are a number of French variations of these screwdrivers.  The wooden 36a had a fluted handle with a large steel ferrule.  This image shows the French "Meccakit" orange-handled screwdriver, introduced in 1976 with a chrome-plated blade.  This screwdriver was included in the the two largest French Meccakits (French counterparts to UK Multikits), respectively Meccakit Travaux Publics 300 (Highway) and Meccakit Grues 400 (Crane).
The 1976 orange handled screwdriver 36a labelled "1 100x4" is not exclusive to the French Meccakits.  My example comes from a Miro-Meccano set 8A in blue box dating from about 1979 or 1980.  These sets pre-dated the yellow box sets and were in French language only, but were imported to South Africa from France after Binns Road closed.  William Irwin
Parallel-tip screwdriver from educational kit
This image does not belong to the webmasters and is copyright.
Please do not download or copy it for any purpose. It has been
kindly provided for use on this site by the image owner,
Ellis Cory

The cut off handle with parallel tip screwdriver was also used in various educational kits. I have a set of 10 work cards and Meccano parts bought from a secondary school. The cards have the marking - '© G.Mills & J.Aitken NES 1989' on them. The illustration shows the screwdriver and gives it the number 36. Ellis Cory

A wooden part 36a screwdriver in its brown paper wrapping,
with a white label dating it from the early 60s
This image does not belong to the webmasters and is copyright.
Please do not download or copy it for any purpose. It has been
kindly provided for use on this site by the image owner,
William Irwin

The picture shows a wooden screwdriver (part 36a) and its brown paper wrapping, with a white label showing the part number, which dates it from the early 60's.
A box of three standard screwdrivers part 36
This image does not belong to the webmasters and is copyright.
Please do not download or copy it for any purpose. It has been
kindly provided for use on this site by the image owner,
William Irwin 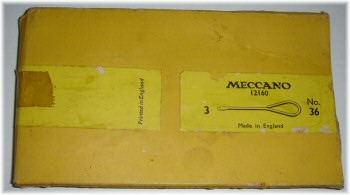 Screwdrivers are very rarely seen in yellow boxes and there would surely not have been many boys who would have bought a part 36 screwdriver from the Meccano dealer. But William has found a box! Pity the dealer who bought these...

¹ There are many examples of similar screwdrivers of this era, but many seem to be much later and from the competing Primus or Singer brands. It is almost impossible with a 100-year-old screwdriver to be sure which box it originated from.
² Rather confusing. Initially the Super Tool Set in 1967 contained (we believe) the .re1 version, changing to the .re ridged version in 1969 (confirmed), also used in the 1972 Clock Kit. The pear-shaped .re2 variation began in 1973 with the multikits, and was also used in the Super Tool Set starting between then and 1975. From 1975, it was also used in the largest outfits 9 and 10 after the demise of the wooden version, making part 36a obsolete. From 1978, the flat version 36b.re4 replaced it in all but outfits 9 and 10.
³ Supplied in "Truckers Fleet Set"