The Meccano hinge, part 114 (this is a pre-war example) 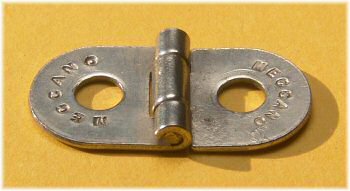 The Meccano hinge is a little-used part, as it was only ever supplied in a pair in the very largest outfits.  Although it appears in the Meccano Magazine of March/April 1921 under "New Meccano Parts", these lists can be a year or more out of date.

The hinge doesn't appear in the December 1919 parts listing (which only goes to part 113), but makes its first appearance in the 1920 manual along with parts up to 122.

1920s, 1951, 60's (larger), 70's (larger), and late 70's (smaller) hinges
This image does not belong to the webmasters and is copyright.
Please do not download or copy it for any purpose. It has been
kindly provided for use on this site by the image owner,
William Irwin

A remarkably unchanged little part, this one.  It appears to have had no change in its form since production started, and has only existed in four different finishes.

But we have stumbled upon yet more variations in our search for photographs.  The picture to the right shows some of the sequence of events.  The first example is a pre-war version, probably from the 1930's, stamped Meccano.  Next to this is the blackened steel "Korean" part, obviously datable to 1951/52.  Both of these have exactly a half-inch spacing between holes when arranged like this.

Comparison of standard and long hinges
This image does not belong to the webmasters and is copyright.
Please do not download or copy it for any purpose. It has been
kindly provided for use on this site by the image owner,
John Nuttall 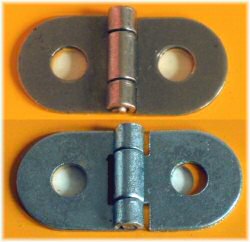 Unstamped nickel post-war hinges are also mostly this size, but a small number are significantly longer, as with the middle example in the photograph.  The hole spacing is about 9/16'', or about 2mm greater than the 'standard' half-inch spacing.  It's particularly clear in the photographto the left, provided by John Nuttall, where the parts are placed over the holes in a flat plate.  The parts appear to be made from similar or identical stampings, the difference is in the position of the curved section.  The longer variety are generally looser.  Only a small number of these exist in nickel plate, dating this change to the early 60s (perhaps 1962, when many parts changed?).
Pre-war 'standard' sized hinge, and 1990's smaller version 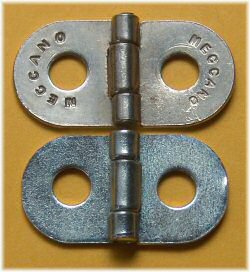 Next to this is the identical zinc plated version, this particular one is from a mint 1972 outfit and thus can be clearly dated.  At the far right of the photograph above is a late 70's smaller version of the hinge – less than half an inch spacing, again by almost 2mm.

These shorter zinc-plated hinges can also be found in the 1985-92 outfits from Meccano SA in France that were supplied to the UK.  The photo to the right shows the comparison between a pre-war half-inch hinge and a post-Binns Road short hinge.  William Irwin believes that this shorter hinge is also of Binns Road production.

We need to measure up some matt brass 1978/79 versions to see whether we can find some variation there.

Possibly a prototype plastic hinge?
This image does not belong to the webmasters and is copyright.
Please do not download or copy it for any purpose. It has been
kindly provided for use on this site by the image owner,
George Illingworth 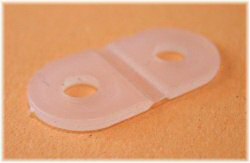 To the right is a picture of a plastic version of the Meccano hinge, sent to us by George Illingworth, who explains:

I obtained 10 of these when part of Bert Love's collection was being sold off by his son at a meeting in Birmingham.  I wondered if these were experimental prototypes which Bert had been sent for an opinion at some time.  Hinges must have been costly to make and perhaps a substitute was being sought? The centre is thinned so that they will easily bend but I do wonder how many flexes they will stand before cracking? Of course they may not be Meccano at all, but the hole size and half inch spacing are very familiar.George Illingworth 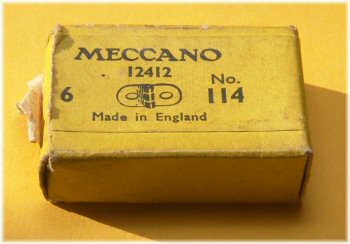 The picture to the right shows a box of six hinges in a spare parts box, dating anywhere from the mid-50's through to the early 60's.  The box and label are unchanged during this period for uncoloured (nickel plated) parts.