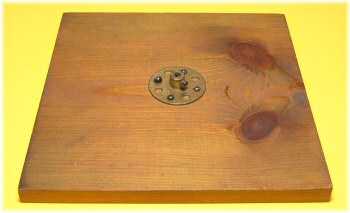 This part finds itself at the end of the special loom parts, and it was introduced for a similar reason.  The Meccanograph was a winning Meccano Competition entry and was apparently a great favourite of Frank Hornby at the time.

The designing table consists simply of a bush wheel screwed to a square piece of timber, and was introduced purely for the Meccanograph.  The image above shows the part upside-down, of course.  Not surprisingly, most modellers simply make up their own (particularly since these are rare and expensive parts nowadays!).  However, it is interesting to note that almost all Meccanographs still use a similar design for their patterns.

The designing table is found in various shades.  Certainly it is seen as plain timber, and stained both green and red, and also with a very slight green stain.  Black has also been reported, but let's wait for pictures before we make too many assumptions.

Naturally, it's pretty easy to make a fake one, and we can be sure there are plenty of these around. It takes a good look at close range to see whether things look real.  However, the black round-head screws are not common, and if you are really suspicious of course it should be possible to spot a significant difference underneath the bush wheel (and on the reverse of the bush wheel) if you are prepared to remove it.

This is one of those parts that you should be very wary of paying a large sum for unless you are quite certain of the source.  In past decades Meccano collectors have been known to be considerably less concerned about the provenance of their parts.

Bush wheel removed from designing table
This image does not belong to the webmasters and is copyright.
Please do not download or copy it for any purpose. It has been
kindly provided for use on this site by the image owner,
John Nuttall

To the right is shown the hole cut for the bush wheel.  Note that the indentation is large enough to take the early patent boss bush wheels, as they would have been at the start of the part in 1916.  This example has three screw holes, which seems to be the 'correct' layout.  The example at the top of this page has four screws, but careful examination shows that the fourth screw is slightly larger than the other three.  On the other hand, there are no screw holes under the unused four holes (which there would be if it had originally had three screws), so we just can't be sure.

No, never seen one of these wrapped either...