The range of flat girders, from 1950
All images on this site are copyright. This particular image belongs to the
webmasters, and you may copy it for your personal use, or for a non-
commercial website - if you credit the source. All other rights reserved. 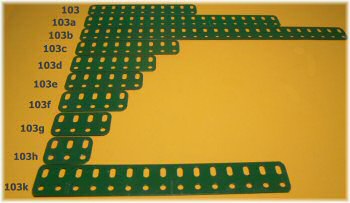 The number sequence for flat girders is a complete dog's breakfast.  There are a number of reasons for this.  Chronologically, the first "flat girder" was the 12½'' long "Flat double strip", supplied in the HMSD between 1910 and 1915.  This was originally part 8, but was not supplied in any Meccano outfits.

The other flat girders were effectively launched in 1921, when the 12½'' flat girder was reintroduced as part 103b.  The smaller versions were numbered from 103c to 103h.

Although flat girders are extremely useful in all models from large to small, they were incredibly missing from all outfits after 1937 except for the largest outfit 10.  Pre-war they were included in outfit 4 and the later outfit G.  This makes the parts surprisingly rare nowadays, although many would have been sold as spare parts.  They are also by far the easiest 'desirable' Meccano parts to make reproductions of, and so there are very many of these around.

Thanks to Richard Payn and Peter Finney for corrections on this page. 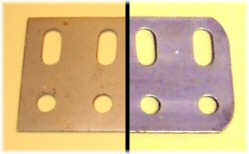 Two odd flat girders supplied only in the Mechanised Army outfit
All images on this site are copyright. This particular image belongs to the
webmasters, and you may copy it for your personal use, or for a non-
commercial website - if you credit the source. All other rights reserved.

There was one strange variation, and that was the two sizes of special flat girder shown left made for the Mechanised Army outfit supplied between 1939-41.  The 2½'' flat girder was identical apart from the central elongated hole being missing.  The 5½'' flat girder had only two elongated holes; one at each end.  It seems very strange that these changes were made, at some expense, and only result in making the parts less useful.  A similar change was made to flexible and flanged plates for this outfit, but the outfit is the only example of such an experiment.

It has been suggested that angle girders are not the same as flat girders that have been bent, but the more I look at this the more I'm convinced they are.  The following observations point to this:

There are very few differentiations between the flat and angle girders.  One is the existence of the Mechanised Army versions missing holes documented above.  It has been suggested that the flat girders are made from a harder steel, but I have no way of measuring this currently.  Unscientific testing suggests that a flat girder is very similar to a flattened angle girder in strength, but perhaps someone else could help us here.

Flat girder spare parts, from 30's to 50's
All images on this site are copyright. This particular image belongs to the
webmasters, and you may copy it for your personal use, or for a non-
commercial website - if you credit the source. All other rights reserved. 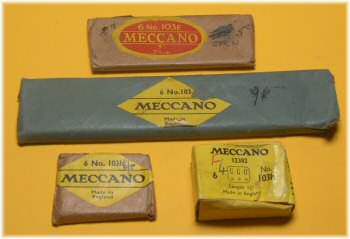 The picture to the right shows common flat girder packaging from pre-war to post-war.  The top packet with a yellow scalloped label is around 1930, containing dark green parts.  I believe that a blue sticker over the top of this would indicate gold parts.

The blue paper wrapper and diamond with sharp corners is immediately post-war (late 40's), followed by the brown paper wrapping and rounded-off diamond (from 1950ish), then the yellow box including the product code (1954-57).

Later 1950's flat girders in boxes
This image does not belong to the webmasters and is copyright.
Please do not download or copy it for any purpose. It has been
kindly provided for use on this site by the image owner,
William Irwin 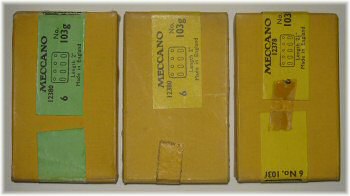 The image to the right shows how the label changed to light green in 1958 with the change to light green parts. Note that the box for parts 103f and 103g is the same size, and in the picture below we can see that the boxes are also identical for 103a and 103k, and for parts 103 and 103c.
More 1950's flat girders
This image does not belong to the webmasters and is copyright.
Please do not download or copy it for any purpose. It has been
kindly provided for use on this site by the image owner,
William Irwin 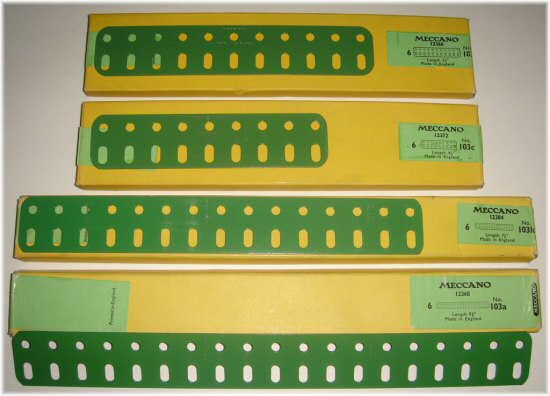