This part wasn't introduced until 1914. Once it was introduced, however, it became one of the very few Meccano parts included in every single outfit made, even the tiny 000 and "Pocket" Meccano outfits. It was named "Flat Bracket" until 1945, when it was renamed "Fishplate".

The very first flat brackets were thicker gauge steel, almost rectangular, with slightly rounded-off corners. Very soon after they were introduced they were changed to the fully-rounded ends we're all familiar with. Since then there have been no significant changes other than to the finish.
Blueprint of fishplate
This image is taken from the original set of Meccano blueprints used by the factory.
These originals were scanned by Tim Edwards, and the scans can be viewed
on www.meccanoindex.co.nz by clicking on the link in the text.

The blueprint for this part shows it as being manufactured from 0.24'' half hard steel, originally drawn up in June 1915. The drawing to the right originates from 1944, when the fishplate was known as the "flat bracket".

Changes noted on the drawing are as follows:

It is interesting to note that the blackened finish ("Brunofix"), necessitated by the restriction on the use of Nickel during the Korean War, was in place until February 1954. It is commonly thought that this finish was only used during 1951-52, but this blueprint would seem to indicate that it was used all through 1953 as well.

The original blueprint for this part can be seen by clicking here.

1970s spare parts bag of fishplates
This image does not belong to the webmasters and is copyright.
Please do not download or copy it for any purpose. It has been
kindly provided for use on this site by the image owner,
William Irwin 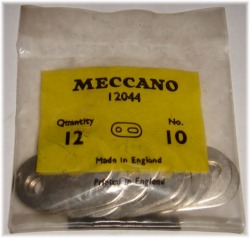