The humble spanner, included in almost all Meccano outfits, has hardly changed in its design but has been available in a wide variety of finishes. The combined spanner/screwdriver was included in various tiny outfits from the X-series to the later Pocket Meccano. The box spanner was supplied only in outfits 9 and 10, and the original square spanner part 34 was replaced by the hex part 34c in 1973, along with the change to hexagonal nuts. 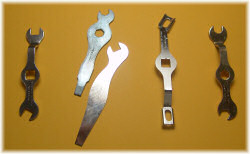 The square spanner, part 34, was surprisingly missing from the Meccano system until it was introduced in the outfit D and outfit E (the largest outfits) of 1906. The spanner soon filtered down into the smaller outfits, and by 1908-1909 it had been realised that two were in fact required, at least in the larger outfits, to assist with lock-nutting.

The combined spanner/screwdriver was introduced into the very smallest outfits, including the 000 outfits, and was also found in the Elektron and other 'fringe' Meccano outfits. They were reintroduced in 1971 with the Pocket Meccano outfit, when it was realised that Meccano still had the old press tool and this would save having to include a spanner and screwdriver in the outfit! The Pocket Meccano part 34a is the upper of the two combined spanner/screwdrivers shown in the photograph above.

A different type of combined spanner/screwdriver was included in the X-series and Motor Car Constructor outfits, visible as the lower of the pair in the photograph above, but this was never referred to as part 34b (the one shown is the X-series part X491, this is also found with a hole in it, and the Motor Car versions are thinner). These have not been included on this page as they were never known as part 34.

The box spanner, although very useful, was only ever included in the 9 and 10-outfits, from 1937. It was available as a spare part from 1923. The hex spanner is a logical requirement with the change to hex nuts in 1973, although it's not clear why it needed a new part number.

Thinner and thicker spanners from around 1930
This image does not belong to the webmasters and is copyright.
Please do not download or copy it for any purpose. It has been
kindly provided for use on this site by the image owner,
John Nuttall 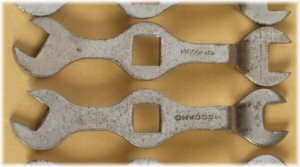 The 'standard' form of the basic square spanner appears to have settled down by around 1920, with straight sides and square ends. In nickel-plated form, this is found stamped MFEA as shown in variant .ni2 below. At some point probably in the late 20's or early 30's, the spanner increased slightly in minimum width from around 0.19'' to around 0.23'', presumably because the narrower versions were too easily bent. The photograph above shows the increase in width clearly, and are of the single Meccano stamp variety. All the blue and red versions (1934-on) I have seen are wider, all the MFEA (up to at least the end of 1927) are narrower.

Although EMP makes some distinctions between spanners on the basis of the stampings, I've removed those from the listings below. Throughout this parts museum there are occasionally instances where the stamping identifies the era and distinguishes between parts, but the orientation and position of those stampings are not normally considered important. Many parts in the Meccano system have highly variable stamping positions, sometimes caused by nothing more significant than there having been more than one press tool for each part. A full analysis of the position and rotation of each stamping is beyond the scope of this website, at least for the moment...

Early black and bronze spanners
This image does not belong to the webmasters and is copyright.
Please do not download or copy it for any purpose. It has been
kindly provided for use on this site by the image owner,
Staffan Kjellin

Staffan Kjellin sent this photo to us, showing the early black and bronze versions (34.bk and 34.xx), thought to be from around 1914-16ish. You can see where the black one is slightly worn and showing the bronze finish below, and so these might actually be only one type, with or without the paint worn off, perhaps?

Part 34, spanner, and part 34b, box spanner
This image does not belong to the webmasters and is copyright.
Please do not download or copy it for any purpose. It has been
kindly provided for use on this site by the image owner,
William Irwin

An early post-war pack of box spanners, part 34b

The exception is the box spanner, a very useful item that was only included in the 9 and 10 outfits. It seems likely that this would be the most common spare part on this page. The top photograph shows the spanners part 34, and the box spanner part 34b, both dating from the late 50's. The photograph below it shows a half-empty package of six box spanners from the immediate post-war era.

¹ Part 34a, the combined spanner/screwdriver, was resurrected from pre-war production for the Pocket Meccano outfit. The old press tool was used, including pre-war-type "Meccano" stamping, on both the square and hex-ended part 34a. It is easily identified as post-war because of the zinc finish. Versions can also be found stamped "Meccano Made in England", as you would expect.
² Part 34c is also found with plain "Meccano" lettering, showing that you can't be certain that the stamping of Meccano on its own defines a pre-war part.
³ Evidence of outfits shows nickel-plated spanners in lettered outfits, and blue painted ones in the numbered outfits from 1937 onwards. Strangely, though, Elektron spanners appear to be blue before this. Red spanners exist, but it is not known in which outfits. They may possibly be French?