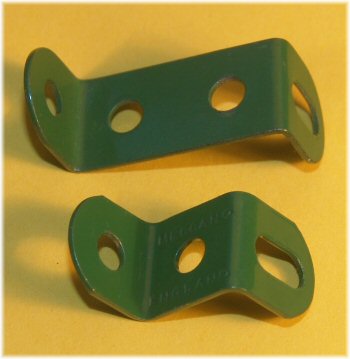 Both reverse angle brackets were announced in the May 1921 edition of the Meccano Magazine, but it appears that they were certainly available before that date (as usual).  Indeed, a reply to a suggestion printed in the March 1921 edition of the Meccano Magazine states that "we have already added to our list of parts a ½'' reversed bracket...", and so we should look for earlier examples of this part.

It soon became obvious that the smaller ½'' version was a far more useful part, and this is shown by the fact that at the next substantial change in the manuals (in 1937, after the lettered outfits were dropped), the ½'' version was supplied in outfits as small as No.1, and yet the longer 1'' version did not appear until outfit 9.  As a result, the ½'' reverse angle bracket is one of the most common parts in the Meccano system, yet its lower-numbered brother is a relatively rare one.

The two parts here were split between the colour schemes of the major and minor small parts during the middle of production.  The longer part 124 exists in dark green and gold, but the shorter part 125 remained in nickel plate and then became red during the blue/gold era.  Note that we do show part 125 in dark green in the table below – these are exceptionally rare and probably shouldn't be considered a 'standard' colour scheme.  Collectors have one or two of these amongst hundreds of part 125s, and this part is one of the easiest to repaint to an indistinguishable condition from new.

Post-war parts are as expected, including that part 124 is found in silver paint, which is logical if this distinction continued.  As usual with these pages, I'm going to leave options open for new versions to be added, rather than assume all the wrong things as is often found in DMS/EMP.  The classification of part 125 as a 'bracket' and 124 as a 'part' continues right to the end of UK production, with part 125 found in iridescent finish.

There don't appear to be many significant changes to the reverse angle brackets that I can see, during the entire period of production.  The most obvious but least significant is the change from rounded end to truncated end for part 125 only, which happened a lot earlier than we might expect (in the strips, for example, this change didn't happen until the mid-70s).  It looks to me as if Mechanised Army (1939-on) and all later parts have truncated ends, but gold and earlier parts have rounded ends.  All part 124s I have seen have rounded ends throughout.

One other possible thing to consider is that (in the small number I have looked at) it appears that one of the folds on part 124 was in a slightly different place on the earliest nickel versions than in all later variants.

The picture to the right shows a nickel and a later gold part 124, where you can see that the elongated hole end is longer on the later versions than in the earlier nickel version.  All later parts I have checked are similar to the gold one in this photo.  Is this common to most nickel parts or do I just have a few oddities? 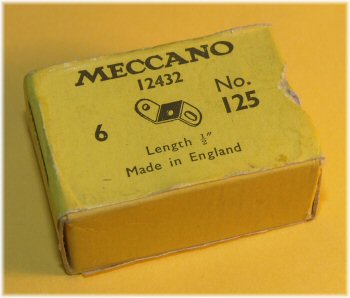