The large and small fork pieces 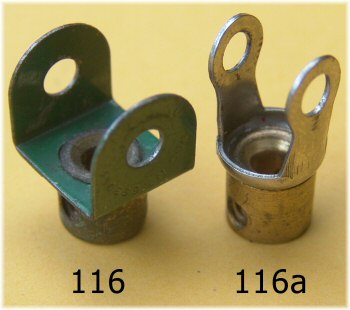 The fork piece was introduced quietly in 1923, and although Meccano part numbers were already up to 138, it was dropped in one of the many spaces after the threaded pin at part number 116.  It appears in the parts listing in the May 1923 manual, and was announced in the Meccano Magazine.

I can't really work out why it was included in these outfits, though.  The only model in the entire 1923 manual to list part 116 is number 307, "Oscillating Steam Engine".  However, this is a typo and the model doesn't use the part – it's corrected in the 1924 manual.  No other models use the fork piece.  Is it possible that the contents of outfits were determined from the parts listings in the manual, resulting in all outfits from number 3 gaining a fork piece, and this mistake was not picked up?

Although the universal coupling part number 140 was introduced in 1925, it was supplied dismantled as the swivel bearing in 1927, and the other part became the small fork piece, part 116a.  Both of these parts were announced in December 1927's Meccano Magazine, and were added to the outfits in 1928.

There are a number of loosely-known dates in here.  Do you have an unmolested well-dated outfit that can pin down these changes better? Please email us...

The large fork piece has had only one significant modification since its introduction.  Originally the boss was mounted randomly on the part, as with most other bossed parts.  At some point, it was realised that the part would be more useful if the double-tapped thread were aligned with the gap in the fork, such that it could be driven by a screwed rod through its boss.  The picture to the right shows a modern aligned boss and an older 'random' boss behind, with screwed rods in the boss to shown what differece a tiny alignment variation makes.

DMS/EMP gives this change as being with the start of the gold period in 1934, but I have gold versions of both types.  The only reasonably datable parts I have are random in the lettered outfits, and aligned in the numbered ones.  This would suggest a possible date of around 1937, but we would need a lot more data to be certain.  It is obviously between 1934 and 1941, and most likely early in this range.

Lots of nickel fork pieces with cross-aligned threads
This image does not belong to the webmasters and is copyright.
Please do not download or copy it for any purpose. It has been
kindly provided for use on this site by the image owner,
John Nuttall 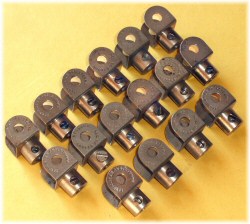 Of course, no sooner do I write this than I get an email from John Nuttall saying that all of his nickel-plated large fork pieces are indeed lined up, but differently from the later versions.

You can see from the picture to the left that all of his large fork pieces, both single and double-tapped, have the threads aligned with the holes. Now, none of my (much smaller) collection are like this. So perhaps we're going to have to suggest that perhaps nickel-plated large fork pieces are 'mostly' aligned in this way...

The stamping on pre-war parts is Reg No 698054 with or without Meccano on the same fork, sometimes with Fabrique En Angleterre on the opposite side.

Post-war the stamping changes to the plain Meccano England shown on the right-hand example.  I can't think of another curved stamping from post-war UK production like this. 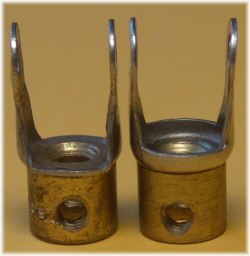 The most well-known variation in the small fork piece is the change from a simple bent strip in the very first versions to a rounded shoulder all around the boss, as shown in the picture to the right.  It is not known exactly when this occurred; pictures of the part are few and far between, and most appear in the supermodels and parts listings which are likely to be reprinted from earlier pictures.

The date of the change is certainly between 1930 (prior outfits have the older style fork piece) and 1937 (when the shoulder is clearly visible in the new numeric outfit manuals), but further research is needed to pin it down more closely than this.

The second variation in the fork piece is shown in the photo to the left.

The earlier fork pieces (including the earliest type without a shoulder) have flat ends to each fork 'tine'.  At some point post-war, the ends become curved to fit 'around' a collar mounted in the fork.  Again, this is hard to distinguish but so far I believe it is during the medium red period, between 1950 and 1958.

With the reintroduction of French Meccano to the UK after the demise of Binns Road, this shaped end to the fork piece disappears again, as can be seen from the late 80s version in the photo to the right.  Are all French fork pieces like this? Many changes that were made in Binns Road post-war were not copied by the French factory and so minor variations like this can continue through their production.
Shorter 'shoulder' on later zinc French parts (right) 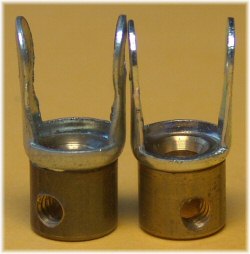 Another difference between the UK and later French production is the height of the shoulder (as in this photo to the left).  The later French part on the right has a much shorter shoulder around the boss.

Note that, unlike the large fork piece, the boss on the small fork piece was never deliberately aligned with the fork and so the position of the boss tapping is random.

Now I've received an email from Dawn Barry, stating that the bosses on small fork pieces do line up, out of a sample of three dozen.  So I dug out a hundred or more here, and found that about 25% of my part 116a's had precisely aligned bosses, but the rest didn't.  A good number appear to be fairly well in line, but inserting a screwed rod shows that they're not bang on.  The pair above, like most of the part 116a's on this page, don't line up.

Perhaps many were made in a rough attempt to have them line up, or perhaps it was just easier to drill and tap the parts a certain way around? There appears to be the same percentage of lined up bosses from the earliest type to the the zinc plated ones.  If you find anything different, please contact us.

Odd pre- and post-war stampings on a nickel plated large fork piece
This image does not belong to the webmasters and is copyright.
Please do not download or copy it for any purpose. It has been
kindly provided for use on this site by the image owner,
Ed Barclay

Well, as usual, Ed sends me another oddity. Here's a nickel plated large fork piece, with the Meccano England on one side and the pre-war registered design number on the opposite side. No explanation here, but I note that the boss is brass (not nickel-plated), and the hole doesn't line up in the same way as all his others, in fact it looks like it's not aligned either way round. I would originally have thought that this is one of the post-1928 special order nickel parts (and thus the boss was added after plating, like with painted parts), which might explain the odd stamping, but then I see that it appears to be single-tapped? No explanation at all that I can see...

Notes: ¹ Since pre-war medium green parts start from 1933, there should be some of these with the boss randomly oriented – do you have one?
² DMS/EMP shows a nickel-plated large fork piece from 1964-70, but this is believed to have changed in 1962 along with many other parts, and changed to zinc in 1966.
³ These are very rare, but we don't know whether they're early or late in the dark red / dark green period yet.