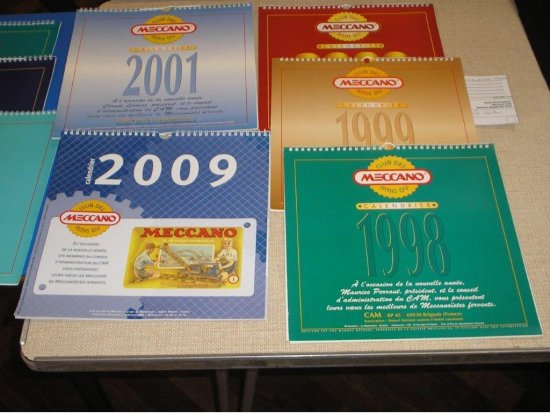 Our Secretary, Bob Thompson began the model tour with a collection of calendars produced for the French Meccano Club CAM, between 1988 and 2013. The collection came from a former member of SBMC. Mostly in a square format, the calendars, in full glossy colour, depicted the wide range of classic, obsolete and interesting items from our hobby over the years. 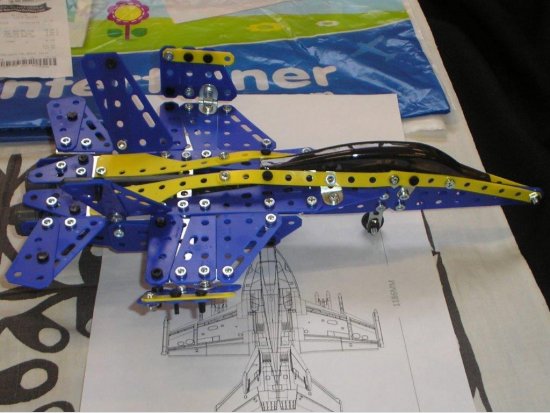 Colin Goodman had returned from a shopping expedition to The Entertainer toyshop delighted to find they stocked some Meccano. Colin had bought and assembled a Boeing F/A 16 Super Hornet, a modern fighter based on aircraft carriers. The blue plastic wings in the outfit were suitably hinged, using the standard metal Meccano Hinge. However, for constructors who followed the official instructions, the wing could not fold fully. Despite this niggle, the outfit was well-liked, and reasonable value. 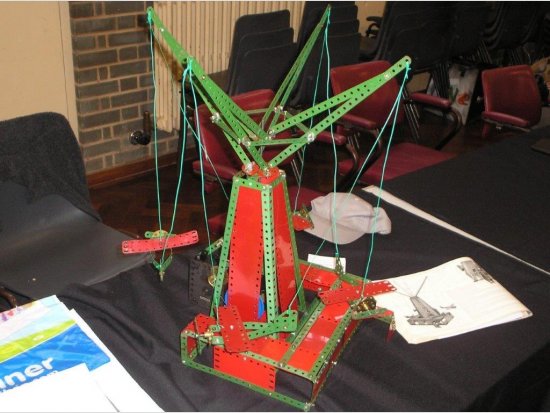 Tony Wakefield had built the fairground flying planes from the No.6 manual. The upper suspending arrangements for the aircraft had been reinforced using additional 12½” Strips. Later on, Tony had the double misfortune of a minor fall and his car wouldn’t start. Happily, Tony and car were back in working order later that evening. 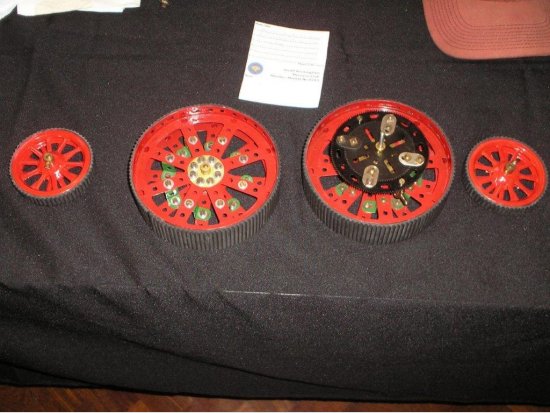 Dave Phillips showed a series of built-up road wheels for traction engines and road tractors. The collection included a wheel-mounted differential utilising a cage built on a 3½” Gear Ring fixed over a 95t Gear Wheel. Realistic tyre tread for the wheels is created from ribbed rubber matting, often seen on the floors of motor scooters. 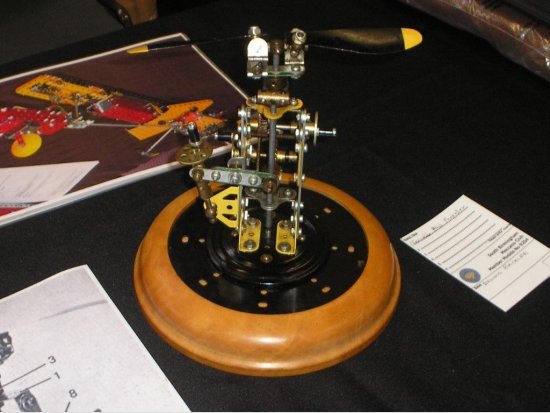 Dennis Backler demonstrated his Round the Pole Helicopter. For a second aeronautical model, Dennis operated the Konkoly-designed Variable Pitch Propeller. This construction gave Dennis his first opportunity to use a pair of Helical Gears. Members were reminded how smooth and quiet a motion can be obtained using these. 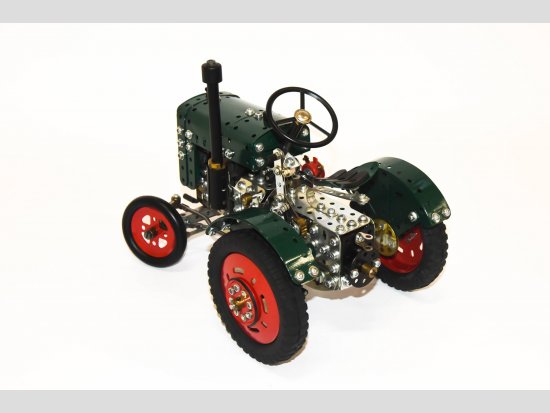 Mike Hooper flew his 4th and 5th generation Round the Pole Helicopter, skilfully landing it on an inclined platform. There was also Mike’s own version of the Useless Box device, whereby a hand swiftly emerges to reset a switch if anyone dares to press it. Finally, a classic Deutz tractor based on a design by Frank Weber (CQ), complete with power take-offs, an all pinion differential, and a starting handle. 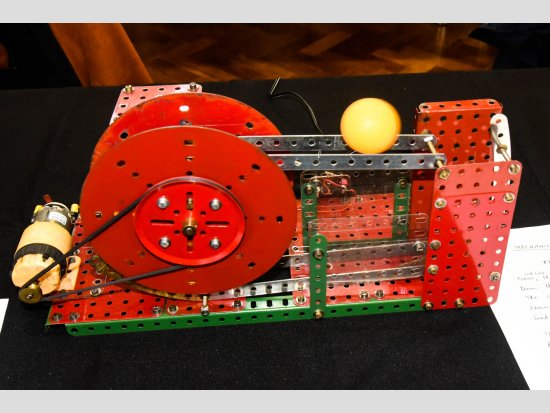 Roger Burton first demonstrated his device for Mechanical Power Assistance, as developed by Robin Schoolar. When the motor is running, it enables a manual input handle to drive an output shaft with greater torque. Another Robin Schoolar model was The Peripherator, an ingenious way to lift balls from one level to another. A rotating pair of 6” Circular Plates sandwich and carry balls from bottom to top. Interestingly, only one ball at a time can ever be gripped, without the need for ‘gates’ to regulate a flow of balls. Roger has found the machine to be very reliable. 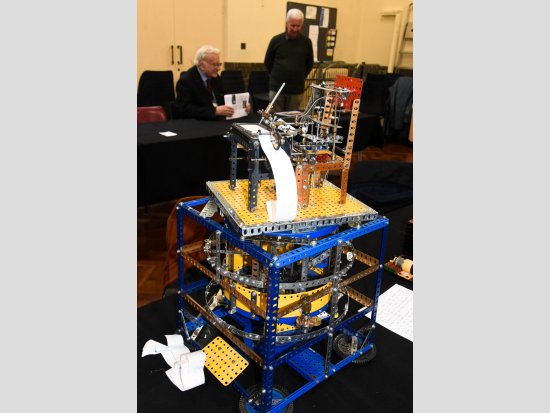 Chris Shute gave the first presentation of his latest Handwriting Automaton. A skeletal manikin sits at a table atop a 12½” cube and writes MECCANO. Although unfinished, and with scruffy results, the machine seems to show that the concept is do-able. The entire device is powered by a No.1 Clockwork Motor and built from parts contained in a No.10 Outfit, with a handful of extra brackets and fishplates for the elaborate cam arrangements. 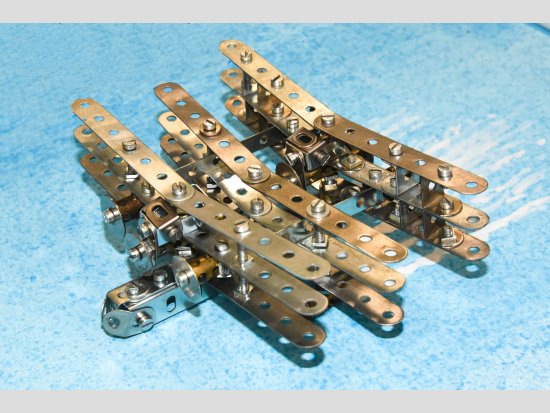 Christopher Bond had researched and built the short-lived Caproni Ca60 Flying Boat, from between the world wars. Count Caproni’s company built large triplane bombers for use in the Italo-Austrian war of 1915-1919. After the war he turned to civil aircraft. The Ca60 was intended to be the proto-type for inter-continental flying boats carrying 100 passengers. At 77ʹ long, and 98ʹ wingspan, they would be three times as heavy as the bombers – so three times as many wings, plus eight rudders and eight 400 HP American V12 Liberty engines, four acting as ‘pushers’ and four as ‘pullers’, mounted in groups of four. Each group was controlled by an engineer in a compartment above the centre pair of his engines. He was instructed by the two pilots via light signals. On its maiden flight it rose 60ʹ above Lake Maggiorre, fell into the lake and broke up. Happily the pilots and engineers escaped, but the aircraft was damaged beyond repair. Christopher’s model, at a scale of 200:1 used nickel and bare steel parts, and was displayed on a seascape surface with a warship of the period. 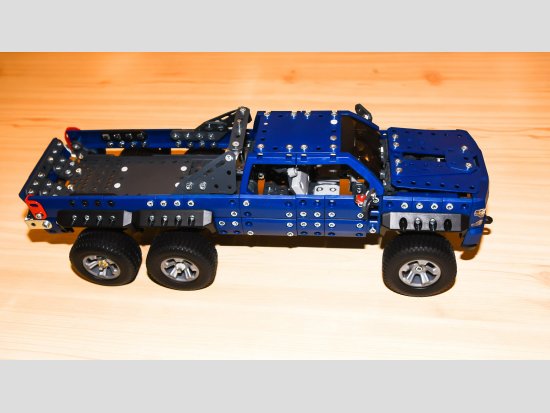 David Bradley showed his stretched version of the current Chevrolet Silverado pick-up kit. Two kits had been combined to give a pleasing result, with sleek blue moulded body. Now with six wheels, the pick-up truck has acquired an extra set of wheel arches. The doors operate, attached by real Meccano Hinges. 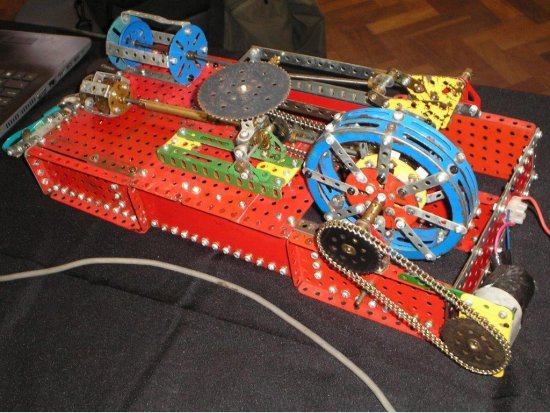 Paul Hubbard operated his Horizontal Steam Engine. The engine runs surprisingly quiet, being driven by an RS geared motor. Work continues on Paul’s dragline, which now has a Geared Roller Bearing, supplied by Mike Rhoades, and a bespoke winding drum with cheeks, bought from Dave Taylor. A clutch has been added to the winding drum. 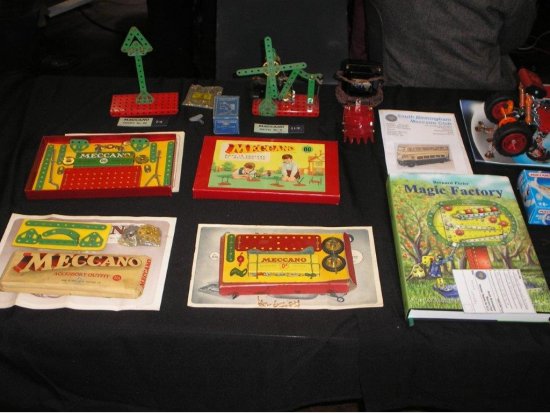 John Lavers displayed his grand collection of outfits 0, 00 and 00a from the 1950s, many of still appeared to be strung from that period. There were historic treasures such as a Ferranti transformer and a Digger Bucket. From the modern era, there were Micro Kits (2010) including the curious folded braced girder. John also hopes to add to his collection of Meccano promotional material and packaging after 1999. 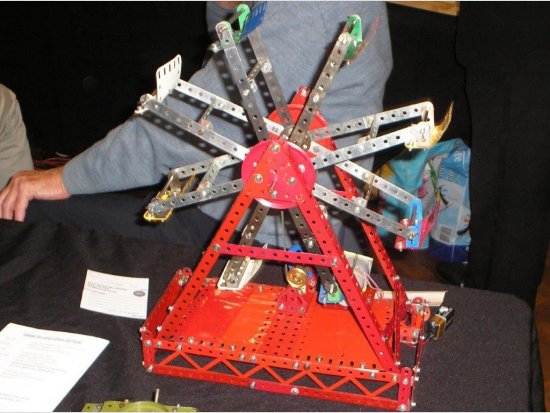 Sid Beckett often displays models at home for the regular ‘crocodiles’ of school children who pass by. His latest model is an eight-boat Ferris Wheel. For this build, Sid decided to time himself. The total job amounted to three hours. 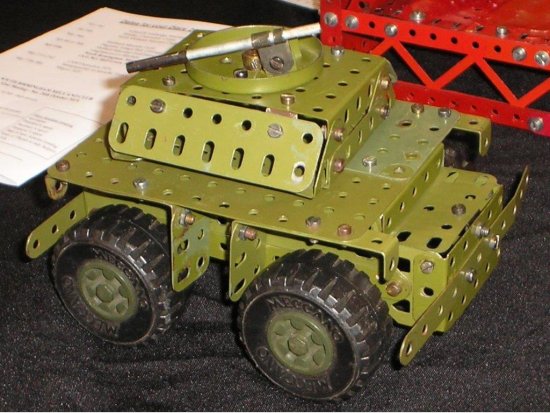 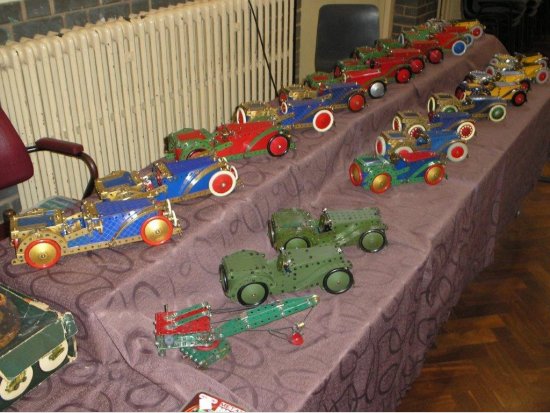 Mike Burgess first displayed his version of the small ‘simplicity’ dragline from the 1920s. For the bucket, Mike soldered on a small wire loop, in order to give correct operation. His massive array of sports cars continues to grow. The same basic model appears in over 22 guises from throughout Meccano history. Each is unique, and reflects the various changes in appearance of Meccano parts. Recent additions include French ‘painted’ spoked Road Wheels, parts from exported outfits, when green parts were used in place of gold, and a rare dark blue Flanged Sector Plate from 1979, which was only found in Outfit 10, when all smaller sets were discontinued.