These should really be called "threaded rods", shouldn't they?  Yes, but Meccano have always called them screwed rods so we'll stick to that for this page.

The full range of screwed rod sizes, in various finishes 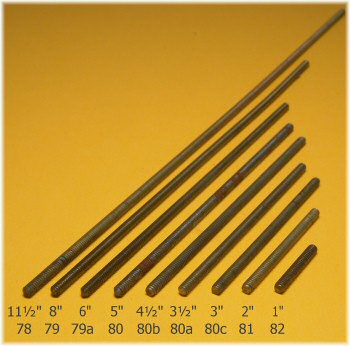 Hang on, the 1'' screwed rod already existed, didn't it?  Well, we don't really know.  It's shown in the 1918 book of instructions, but is not shown in the list of new parts of September 1919 (parts 80 and 81 are).  In the 1919 Special Inventor's Outfit B, parts 80 and 81 are included but not part 82.  Either it hadn't been introduced by then, or it had been thought of but not actually made until 1921 and its introduction into the outfits from that date.  If the part was not supplied in any outfits from 1918 to 1921, and was not available as a spare part either, then it's doubtful we can consider that it really existed!

The 3'' rod was included in outfits as low as number 5, so remains by far the most common size of screwed rod.

In the 1997 "Space X-plorer" outfit 4840, part number 78c was introduced as a 9½'' screwed rod.  This is the only example to date of this part, which disappeared with the demise of this outfit a couple of years later.

If brassed rods were introduced in 1921, then there should be no genuine nickel-plated parts other than 80, 81, and 82.  Anyone got any?

Cut-off and rounded ends to screwed rods
All images on this site are copyright. This particular image belongs to the
webmasters, and you may copy it for your personal use, or for a non-
commercial website - if you credit the source. All other rights reserved. 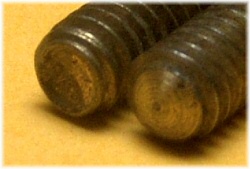 When first introduced, the rods were nickel-plated steel.  Quite soon after this (perhaps in 1921?) the rods were brass plated instead.  The most noticeable change is from cut-off ends to rounded ends (compare the two ends in the picture to the right), but it is difficult to spot when this happened.  Certainly as late as 1960 many rods still had cut-off ends.

The confusing part is that the earliest nickel-plated ones do have rounded ends, as with the parts 80.ni and 81.ni in the table below, which date from 1920.

Did the rounded ends actually come first, followed by cut-off ends, and some rounded ends later?  I have nothing like enough mint outfits to be able to identify this with any certainty.

Aero part P207, and X-series part X435
This image does not belong to the webmasters and is copyright.
Please do not download or copy it for any purpose. It has been
kindly provided for use on this site by the image owner,
John Nuttall 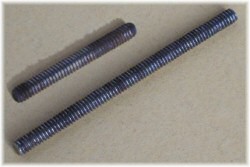 ...but the zinc plated ones are steel
This image does not belong to the webmasters and is copyright.
Please do not download or copy it for any purpose. It has been
kindly provided for use on this site by the image owner,
John Nuttall 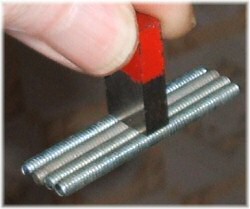 Ed Barclay has helpfully pointed out that the nickel-plated Electrikit part 81's are nickel-plated brass, and non-magnetic.  Thus we can easily differentiate them from the much earlier nickel-plated original part 81.

However, the later zinc-plated versions as supplied in the 4EL outfit are obviously zinc-plated steel, as John Nuttall demonstrates in the most obvious way possible!  He has thus become the first person to get a picture of himself (or at least his thumb) on the OPM...

Howard has since confirmed that 1½'' (and other lengths) are not Meccano parts, they were made by MW Models.  Still looking for the black ones though.

1.5 inch zinc plated screwed rod
This image does not belong to the webmasters and is copyright.
Please do not download or copy it for any purpose. It has been
kindly provided for use on this site by the image owner,
William Irwin

William Irwin has some oddities that need explaining...

I have 4 x 1½'' zinc rods no. 81a as listed in MeccInv as a genuine Meccano item, i.e. not from a replica manufacturer (picture attached).  What puzzles me is that I cannot find any reference to 81a in any official Meccano parts lists, nor in any of Oscar's lists.

A range of screwed rods in boxes, mostly from the 60s

Most of the parts above are from the 60's, as can be seen from the light yellow boxes.  The parts in these boxes have cut-off ends.  As the parts were not painted, the yellow labels remained after the change to light red and light green in 1958.

The small tin of part 82 in the lower left-hand corner is from the 30's.

Note:  ¹ I personally am not at all sure that any nickel-plated screwed rods exist apart from the parts 80 and 81, as listed in the 1919 MM advert of new parts and supplied in the Special Inventor's Outfit B.  We shall see!
² Only supplied in outfit 4840 "Space X-plorer"