As with the set screws, these parts weren't included separately in each outfit, but were included where required in the brassware.  Only the very short grub screw, part 69c, was included in outfit 10 from its introduction in 1937.

The three types of grubscrew: standard, long, and short 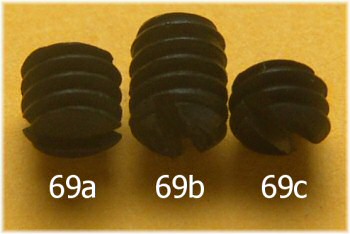 Another tricky part to spot, there are in fact three different lengths of grub screw, as shown in the picture to the right.  Part 69a is by far the most common, supplied with most brassware such as collars, gears, couplings and so on.

Part 69b is a special long grub screw originally supplied with the octagonal coupling part 63a, but later available also as a spare part.  Part 69c is a short grub screw that is very useful in complex gear mechanisms as it doesn't stick out from the boss of the gear.
Part 69c (left) and part 69a (right)

The easiest way to identify the smallest grub screw is by its concave end.  You can see in the picture to the left the concave end of part 69c (left) compared with a standard grub screw part 69a on the right.
Geartrain showing the use of small grub screws 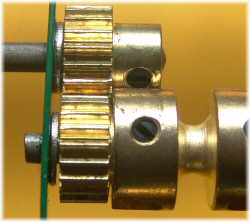 The long grub screws, part 69b, can be used for various trickery in small spaces as they are long enough to hold a nut on one or both ends.

As with the set screw, this part didn't have its own number until 1916 even though it was supplied with collars and other parts from 1912.

Initially plain steel, these parts were very soon supplied in blackened steel (from at least as early as 1915), and almost all examples are like this.  Grub screws are found in nickel, and brassed.  It is very difficult to date these parts as they, like set screws, get mixed up in outfits rather easily!

All grub screws changed from black to bright zinc plated in 1978.  69a and 69c were iridescent in 1979. William Irwin

...and now thanks to Richard we also have an example of the iridescent 69b.ir in the table below.

Pre-war tin of short grub screws 69c, at 5/16in
This image does not belong to the webmasters and is copyright.
Please do not download or copy it for any purpose. It has been
kindly provided for use on this site by the image owner,
William Irwin 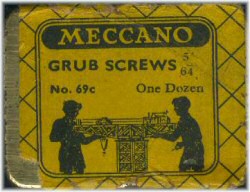 The short grub screw in fact had two different lengths.  When introduced in 1937, it was 5/64'', as shown by the label on the tin to the left, and in the 1937 parts listing.  Immediately post-war, the lists show this part as lengthening to 7/64''.  Thanks to William for spotting this.  The very small grub shown below might well be one of the very short ones.

This length change might well make sense in combination with the concave ends to the short grub screws.  If the very short grub screw has a convex end, it would have to be around 5/64'' long to avoid the head protruding from the boss.  However, if made with a concave end it can be made longer and thus easier to handle, and still perform its function. 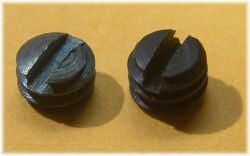 But of course it's not as easy as that, is it.  It seems that the majority of pre-war part 69c do indeed have concave ends, and are slightly shorter than the post-war versions.  Note that these parts are only supplied in the pre-war outfit 10 and as spare parts, so they're hardly common.

Perhaps the convex-ended part 69c are an early variation, soon changed to concave ends, and the length was increased to 7/64 post-war once they realised that it was easier to have them longer.

Concave-end 69b and convex-end 69c
This image does not belong to the webmasters and is copyright.
Please do not download or copy it for any purpose. It has been
kindly provided for use on this site by the image owner,
John Nuttall

John Nuttall sends us a couple of weird ones – a long 69b with a concave end and a short 69c with a convex end.  These appear to be one-off mistakes, rather than deliberate parts.  They could conceivably be from another system altogether, of course.

Spigot-ended and ultra-short versions of 69c
This image does not belong to the webmasters and is copyright.
Please do not download or copy it for any purpose. It has been
kindly provided for use on this site by the image owner,
Ed Barclay

And to prove you can't keep a good man down for long, Ed comes back to us with some even more strange variations.  Here's a spigot-ended short grub screw (which is thought to have come from the model room at Binns Road), and a very very short version of the 69c.
Grub screw with indentation
This image does not belong to the webmasters and is copyright.
Please do not download or copy it for any purpose. It has been
kindly provided for use on this site by the image owner,
Ed Barclay

Yet another oddity is shown right – a standard grub screw with a rounded end and a strange indentation in the bottom.  Again, no idea where these are from, or even if they are Meccano.

One of the most annoying thing about grub screws is that the heads can break rather easily while you're tightening them up.  If this happens you can end up with part of a grub screw stuck in a boss and almost no way of removing it.  The solution is to put the part in a strong acid such as supplied for swimming pools (33% hydrochloric acid).  The grub screw will dissolve leaving the brass gear untouched.  You must make sure that the part you're removing the grub screw from is entirely brass, of course!

Early 50s (white), late 50s (yellow), and 60s boxes
All images on this site are copyright. This particular image belongs to the
webmasters, and you may copy it for your personal use, or for a non-
commercial website - if you credit the source. All other rights reserved. 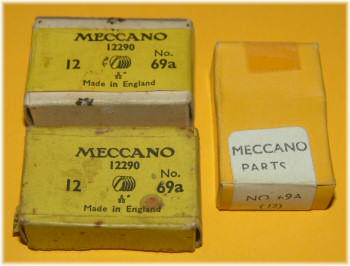 Grub screws in packets are very common, as they were often needed to replace lost ones.  Even today, there is a good market for grub screws both Meccano and reproduction.

1950s box of part 69c, the short grub screw
This image does not belong to the webmasters and is copyright.
Please do not download or copy it for any purpose. It has been
kindly provided for use on this site by the image owner,
William Irwin 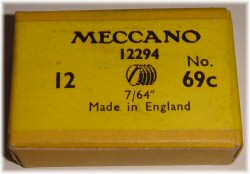 To the right, a packet of the shorter grub screws, part 69c.  As usual with unpainted parts, these boxes with yellow labels continued right through the medium red/green and light red/green eras, so these parts could be as late as the mid-60s.