Introduced in 1914, the centre fork's primary use is as a knife-edge bearing.  The reproduction of Standard Mechanism number 130 below shows a centre fork in this application.

The early versions of this part were particularly sharp, making them very good at their job but rather dangerous! 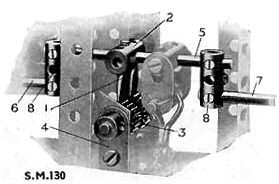 In the dark blue / dark yellow period, the centre fork was discontinued, and strangely substituted in the outfit 10 by a 1'' axle rod.  This doesn't seem like much of a substitution to me!

The document describing this is dated January 1979, so we can probably assume that centre forks weren't supplied in any outfits during 1979.

There appear to be three easily identifiable versions of the centre fork.  These are shown in the photo above.  The first two are very flat and have sharp points, with a short shaft.  The post-war version to the right has a substantially longer shaft, and the points are not particularly sharp – they still have reasonable thickness even at the points.  This of course rather compromises their usefulness as knife edges.

Martin will be able to tell us this.  Do you have a date for this?

But also, the finish of the earliest parts is the dark grey of the axles.  Post-war the centre fork was nickel plated, changing to zinc plating at some point after the light red/green period.  Logically we could guess that this was probably around 1966, when much of the nickel-plating changed to zinc.

Part 65 from the early 50s
This image does not belong to the webmasters and is copyright.
Please do not download or copy it for any purpose. It has been
kindly provided for use on this site by the image owner,
William Irwin 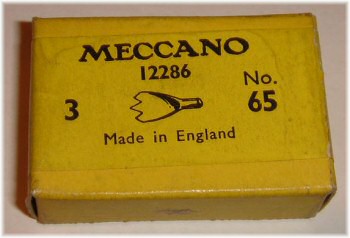 The box to the right shows centre forks probably dating from the early 50's (mid yellow box with yellow label).  Note that the picture clearly shows the pre-war wider version of the forks, but the contents are probably the later longer version in nickel plate.