Windmill sails.  Top row: nickel-plated from 1913 to 1919 with tails.
Bottom left, 1919 to 1934 without tail.  Bottom right, 1934-78 painted sails
All images on this site are copyright. This particular image belongs to the
webmasters, and you may copy it for your personal use, or for a non-
commercial website - if you credit the source. All other rights reserved. 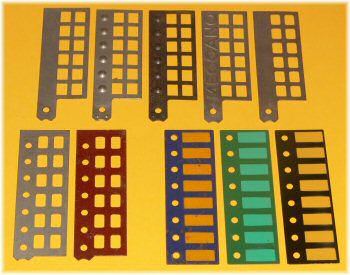 There are three distinctly different styles of the windmill sail.  The first is shown in the top row of the picture to the right, with a tail and twelve cut-out windows in the sail.  There is a single hole in the end of the part, and a curved section next to the hole.  The sail is intended to be be bolted to a bush wheel and the curved section fits snugly against the boss of the bush wheel.

At the bottom left is the second type, introduced in 1919.  It looks like the tail has been removed, but in fact what has happened is that the 'sail' has been extended back towards the tail.  There are still twelve cut-outs, but they are spaced further apart.  As well as the hole at the bottom, six additional holes extend up the spine of the sail.

In 1934 the design changed completely, to a flat plate measuring 4'' x 1½'', and eight holes.  There is no curved section for the boss, and no cut-outs.  Instead, eight panels are painted on the flat part of the sail.  This style continued in various colour combinations until the part was discontinued in 1978.

More subtle changes can be detected in the earliest versions.  Initially, the cut-outs have sharp corners, and measure approximately 3/8''x9/32'', with 1/8'' of metal between each cutout.  In the top-right example, the cut-outs have rounded corners, but are the same size.

The chronology is assisted by Love & Gamble's reference to the original drawings, on p.99 of Volume 6.  The first example is shown flat, followed by the 'dimpled' version in 1914.  Later come the versions embossed with MECCANO (fourth one along on the top row), with and without rounded holes.  The flat version with rounded holes (top right) is assumed to be later, as no early ones are shown with rounded holes.

From 1934, the sails are a single flat plate without holes, painted in the base colour and then overpainted with contrasting panels.  During the blue/gold era these are dark blue with yellow panels (not gold).  Post-war, the sails change to medium green with a slightly lighter panel.  The panel lightens substantially in the early 50's, then lightens again with the change to light green in 1958.  In 1964 the sail changes to yellow on black.

The painted sails are plain on the reverse side (in the background colour), although the last version is known with both a plain black reverse and with yellow panels painted on both sides.

In my experience, the 'no-tail' versions are by far the most common, being made between 1919 and 1934.  Of the earlier ones with the tail, the most common is the one with six dimples.  Examples from post-1934 are surprisingly rare, as they were only supplied as spare parts and not required for any of the standard models.  The best use for these painted parts has been as rows of windows on the sides of ships, buses and so on.

The earliest photo of the windmill sail, you can't see through them! 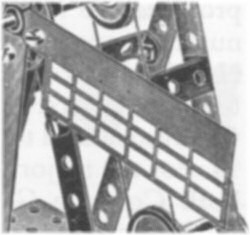 DMS and EMP both make reference to a very early version with three rows of cut-outs.  Volume 6, however, points out that these are only shown in the diagram for a model in the 1913 instruction manual (see right), and they are assumed to be prototype or cardboard mock-ups of the actual part made for the illustration.

What Volume 6 doesn't mention is that if you look at the picture, the sails don't have cut-outs at all – you can't see the parts behind!  This makes it fairly obvious that the parts are mock-ups made for the manual.

Misregistration on the painted panels of part 61
This image does not belong to the webmasters and is copyright.
Please do not download or copy it for any purpose. It has been
kindly provided for use on this site by the image owner,
George Illingworth

Very early nickel-plated sails
This image does not belong to the webmasters and is copyright.
Please do not download or copy it for any purpose. It has been
kindly provided for use on this site by the image owner,
John Bader

Many collectors like Meccano parts in their original spare parts packaging, but there are very few who have something as rare as those pictured to the right.  These are nickel-plated windmill sails, of the flat rounded-hole type (part 61.ni3 as shown in the table below), dating from between 1919 and 1926, still in their original translucent paper wrapping.  Note particularly the diamond-shaped Meccano label, which was to be replaced by a scalloped oval label, then reappear in 1945.

The picture to the right shows a post-war brown paper pack of windmill sails, probably dating from around 1950 in medium green with the slightly lighter green painted panels (part 61.mg shown below).

Later versions are shown below in the more common yellow card boxes, which initially were pictured incorrectly as having seven panels and a tail (see top box in the photo below), later corrected to the actual rectangular form.  The "LF" sticker on the middle box indicates lead-free paint, a new regulation in the mid-1950's.

Post-war medium green and light green painted sails
This image does not belong to the webmasters and is copyright.
Please do not download or copy it for any purpose. It has been
kindly provided for use on this site by the image owner,
William Irwin 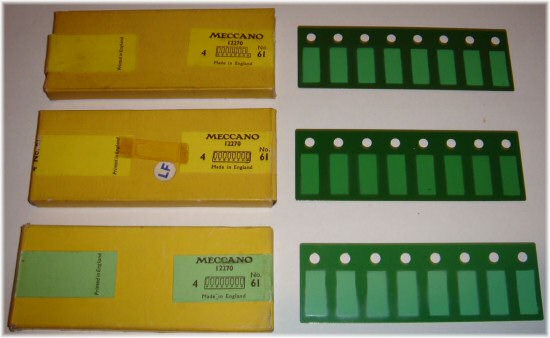 Note:  ¹ This part is not quite as dark blue as the normal dark blue of this period.  It is quite likely a one-off or experimental part – originally belonging to Bert Love.