Spring cord, part 58, with a connector (58a) and hook (58b)
All images on this site are copyright. This particular image belongs to the
webmasters, and you may copy it for your personal use, or for a non-
commercial website - if you credit the source. All other rights reserved. 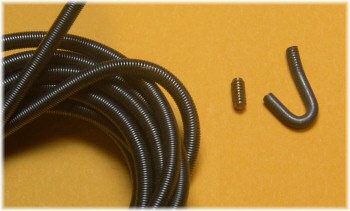 Spring cord is a strange duck.  Introduced very early, in 1913, it must have been fairly useless at the time as it couldn't be connected together easily.  In the early years Meccano was constantly asked to provide driving bands but insisted that string was a perfectly suitable method of connecting pulleys.  The spring cord could have been a very nice solution, but wasn't particularly good until 1929 when the coupling screw was introduced.

The coupling screw has the honour of being the smallest of all Meccano parts, only 4mm long and 1.6mm in diameter, with a 9BA screw thread along its length.  Suddenly it became possible to create belts to drive models with the spring cord, and 12 connectors were included with the 7 outfits from 1930 and the L outfit after that.  The owner of a K outfit was left with spring cord but no connectors.

An article in the JMH Newsletter, March 2003, suggests that using the coupling screw results in an inflexible spot in the cord.  A better solution is making two small hooks at both ends of a piece of cord by carefully bending the thin wire with appropriate pliers.  This method will give a smoother running driving band than using the coupling screw. Hans van Ouwerkerk
Another interesting thing about the spring cord is that it was introducted to Meccano in 1913, and only available in the top #6 set.  Yet, the year before it was in the 1912 American Model Builder sets in the form of spring drive bands available in the #5, with 2 & 4 in the larger sets 6 & 7; and they were connected on the ends by just such bending/looping of the end coils. Orion
When outfit 10 was launched in 1937, the spring cord was dropped.  It was added back to the system in 1950 when the post-war 10-outfit appeared, but without connectors.  In one of the rare additions to the largest outfit, two connecting screws and two connecting hooks (part 58b) were added to the outfit 10 in 1973.

The spring cord is very difficult to identify by age.  There was only ever one supplied in the largest outfits from number 6 in 1914 to the 10 outfit post-war.  Spring cord is by its nature a 'consumable' part, and it is very difficult to tell whether an included part is original or not.  Most often it is replaced, sometimes by reproduction parts.  Only unopened and readily dated spare parts boxes can show us for certain how the spring cord changed.
Spring cord from pre-20's, post-war, and post-1985
All images on this site are copyright. This particular image belongs to the
webmasters, and you may copy it for your personal use, or for a non-
commercial website - if you credit the source. All other rights reserved. 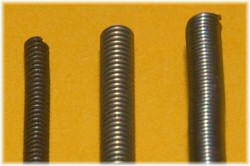 Having said this, I have identified at least three varieties of spring cord, as shown in the picture to the right.  The first example is (I believe) from a 1917 outfit 5A.  It is considerably thinner than later spring cord.  The second example is the most common type of spring cord, certainly available pre-war and identical through to the late 60's at the very least.  The third example is from a post-Binns Road outfit (the French outfit 10 made from 1985-90), and is slightly thicker but made from a much thinner wire. The approximate measurements are shown below:

The most important issue is that the couplings and hooks (parts 58a and 58b) won't fit in the left-hand spring cord.  But we wouldn't expect that, since the coupling screw wasn't introduced until 1929.  I would be tempted to suggest that perhaps the early spring cord was thinner like this, and made a larger diameter in or around 1929 to take the 9BA thread of the coupling screws (which would have been impossibly small with the thinner spring cord).  I don't know whether the French spring cord shown was always of this finer type with French manufacture, or whether it changed earlier.  I have seen a 1979 outfit with this thinner and more modern-looking cord, although it could have been purchased later from the French stock.  Help would be appreciated from anyone who has an outfit 10 of the 70's that is known to have its original spring cord.

The later French spring cord takes the 9BA threads perfectly well, as it is considerably more 'springy' than the earlier type.  Roughly measuring the available extension shows that the early spring cord will only extend by about 25% of its length, the post-war UK spring cord about 50% of its length, but the French later spring cord will comfortably stretch to over twice its original length (and spring back fully) before starting to stiffen up.

There is considerably more variation in the coupling screws and hooks.  Screws are known to exist in nickel, black, and brass at least, and hooks in plain steel and black.  Examples of other colours or finishes would be most welcome.  The plain steel hook certainly applies in spare parts from the 50's through to the 70's, and dating the variations is not something I've been able to do yet.  Any assistance would be most welcome!

Various packages for spring cord (top) and connectors (bottom)
All images on this site are copyright. This particular image belongs to the
webmasters, and you may copy it for your personal use, or for a non-
commercial website - if you credit the source. All other rights reserved.