Nickel, dark red, and longer 1935-on flanged sector plates
All images on this site are copyright. This particular image belongs to the
webmasters, and you may copy it for your personal use, or for a non-
commercial website - if you credit the source. All other rights reserved. 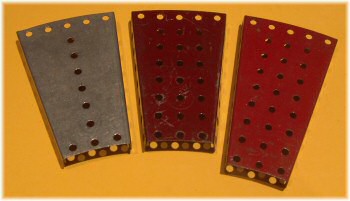 One of the very few Meccano parts with an odd angle, the flanged sector plate has become a little too well-supplied in most collections. At its launch in 1911 it was supplied in every outfit, and even after the war there was a pair in every outfit from number 4 upwards.

One of the few interesting things that can be done with the flanged sector plate is to make a large circular platform out of 24 of them. If you do this, make sure you are using 24 of the same sized versions -- the pre-1934 version of the flanged plate is half an inch shorter.

Nickel-plated flanged sector plates have a single row of holes, and are only 4'' long. They can be dated to some extent, by checking the stampings on them.
A typical stamping of a 1920s flanged sector plate
All images on this site are copyright. This particular image belongs to the
webmasters, and you may copy it for your personal use, or for a non-
commercial website - if you credit the source. All other rights reserved.

Sector plate stamped with Swiss patent number
This image does not belong to the webmasters and is copyright.
Please do not download or copy it for any purpose. It has been
kindly provided for use on this site by the image owner,
John Nuttall

A small number of early nickel-plated sector plates are found with the stamping shown to the right, consisting of an outlined cross and the Swiss patent number 22385. This is the "Federal Cross", required at the time by Swiss patent law to protect the parts in that country.  This stamping is uncommon – perhaps only parts intended for sale in Switzerland were so marked?  You can see that the part is also stamped FEA, which is only required for parts sold in France.

As described above, part number 54 was originally only 4'' long.  In 1934, with the start of the new lettered outfits, a new longer version was introduced as part number 54a.  In the 1935 catalogues, outfits up to H were shown with the longer 4½'' version, but outfits K and L still had photographs with the older variety.  In 1935, part 54 was dropped and part 54a renamed back to part 54, effectively making the part increase in length by half an inch.  It was a rather strange way of doing it though.  4'' versions in blue and gold are rare -- most of this colour scheme are longer.

Small (left) and large (right) elongated side holes
This image does not belong to the webmasters and is copyright.
Please do not download or copy it for any purpose. It has been
kindly provided for use on this site by the image owner,
John Nuttall 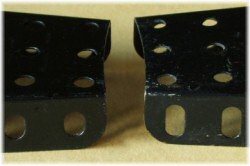 From 1935 onwards, the only change to the flanged sector plates was that the elongated holes in the side flanges increased slightly, during the time they were black (1964 to 1969).  Martin Hanson has studied a range of mid-60's outfits and suggests that this change was quite early on in the period, certainly before zinc plating replaced the silver painted strips.  He has an outfit in a vacuum formed tray with silver painted strips and the small holes in the sector plate, and a slightly later one in an expanded polystyrene tray with silver painted strips and the longer holes.  This would date the change to late 1965 or certainly no later than 1966.

Although the flanged sector plate is an extremely common part, it is interesting that it is one of the rarest of all parts in the dark blue (1978/79) colour scheme.  Only supplied in outfits 9 and 10 of this era, all examples studied so far appear to be 1970's blue ones oversprayed in dark blue.

Flanged sector plate in light red
This image does not belong to the webmasters and is copyright.
Please do not download or copy it for any purpose. It has been
kindly provided for use on this site by the image owner,
William Irwin

The box above contains a light red flanged sector plate.  The light green label tells us it's a part from 1958 to 1964, after the change from medium green to light green.  Since sector plates are red this obviously means light red.  Note that the box is the same as that used for the 5½''x2½'' flanged plate, part 52.