One of the first specialised Meccano parts, the propeller blades can't be used for much other than their obvious application. The early propeller blades can be straightened and used in other areas, but the formed shape of the later type of blades is pretty much fixed.

EMP ignores the pea-red single-hole part 41, and mentions a two-hole nickel part from 1923. These were probably to special order only.

The second and much more common design of part 41 remained all the way through UK production, although later versions are rare as they were dropped from outfits in 1954 (previously they had been supplied in both outfits 9 and 10). Light red and later varieties were therefore only supplied as spare parts, but no manual models used them and therefore they would have rarely been needed.

The first of the type 2 shaped blades (in dark red) are found both left- and right-handed. I believe it can be assumed that the unusual left-handed versions came first, and the much more common right-hand variety soon replaced it and continued through all other colour schemes.

Of course, even after the advent of dark red/green Meccano one could still order nickel-plated parts from the Meccano factory. The propeller blade is one of those parts that changed just after the start of coloured Meccano, so the type 2 blade in nickel (type .ni2 below) would only have been available by special order and as such is a very rare part. The type 1 blade with two holes in nickel finish (normally only available in dark red) also exists, but to special order only.

Hearsay from an ex-Airfix Director via a third party:

The Yellow #41 with the black tip was introduced first and changed to black with yellow tip when someone (a member of the public, it is thought) pointed out yellow tip blades were standard aircraft practice at that time.

The date of the change I do not know. Roland Jaggard

All-yellow propellor blades
This image does not belong to the webmasters and is copyright.
Please do not download or copy it for any purpose. It has been
kindly provided for use on this site by the image owner,
Neville Bond 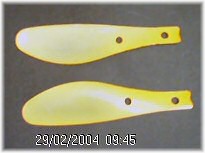 Apart from the left-handed and right-handed varieties, one obviously strange combination is this pair of all-yellow blades (apologies for the unclear picture). These appear to be late 60's yellow blades that should have had a black tip, but have been 'freed' from Binns Road before they had their second paint colour added.

Mid red (left) and light red (right) propeller blades
All images on this site are copyright. This particular image belongs to the
webmasters, and you may copy it for your personal use, or for a non-
commercial website - if you credit the source. All other rights reserved.

To the left in the photo above, post-war medium red/green propeller blades in brown paper. To the right, the light green label on the yellow box identifies the parts as being light red/green, from 1958 to 1963. After the blades were dropped from all outfits, blades such as these light red ones with a light green tip would only have been available as spare parts.