The picture to the right shows the three parts on this page. To the left, the standard 3/8" washer, in the middle the larger 3/4" washer, and on the right the much later (1990's) black plastic spacer, which is really a substitute for the collar (part 58), but lives here because it was given the part number 38a.

The early washer is a bit of a mystery. The part is shown as being introduced in 1909, but doesn't turn up anywhere until the Inventor's Outfit A of 1915. It wasn't included in outfits until 1922, when it was suddenly included in quantity (200!) in the largest outfit 7.

The larger washer is a much later part. Originally introduced as a small disc in the X-series Meccano, it was included in the Meccano range in 1937 as "Disc, 3/4'' diameter" and part 217b. After the war the part was renumbered and renamed to be the more familiar ¾'' washer, part 38d. It appears that most pre-war Meccano discs are stamped Meccano (see picture of type 38d.ni2 below), and most post-war washers aren't stamped. Not certain here, though... 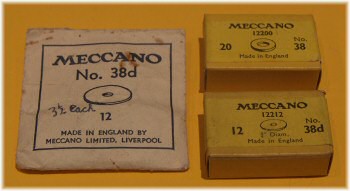 The picture to the right shows the standard 50's spare parts boxes for parts 38 and 38d, very common spare parts as there were rarely enough in an outfit. Interestingly, the small paper envelope is for part 38d's, showing that these envelopes were in used immediately after the war (pre-war, this would have been a part 217d).
Small and large washers in later polythene bags
This image does not belong to the webmasters and is copyright.
Please do not download or copy it for any purpose. It has been
kindly provided for use on this site by the image owner,
William Irwin

Later, the same parts were supplied in plastic bags with a yellow printed rectangle showing the part numbers. These date from the 60's.