Originally the feather key and then the tongue key, this part was used to attach wheels and gears to axles in the early years. With the introduction of the boss and set screw in 1912, the 'key' lost its tongue and became the spring clip, normally used as an economy version of a collar.

Initially, the key was a necessary part of all wheels, gears, and pulleys. The feather key (shown to the left in this photograph) connected the slot in the wheel with the slot in the axles. The later 'tongue key' fastening (second clip) slid into an indentation in the wheel and jammed it against a solid axle. With the advent of bosses with set screws in 1912, the 'keys' lost their tongue and became spring clips, used to prevent a part from slipping along an axle.

The right-hand three clips in the photograph above show the variations in the spring clip. Initially, they had narrow legs rather like the tongue keys. Later, these legs widened, around 1918 or so. They were still stamped out of spring steel, having rounded edges. Some time around the early 20's (anyone know when?) they were cut from a strip of spring steel, and have 'truncated' ends rather like the perforated strips. This style of spring clip remained unchanged through to the end of UK production in 1979. Some later ones seem to me to be 'bluer' than the earlier blackened steel ones -- I'm not yet clear enough on the change to be able to firmly identify a variation, though.

Spring clips in all sorts of small parts boxes
All images on this site are copyright. This particular image belongs to the
webmasters, and you may copy it for your personal use, or for a non-
commercial website - if you credit the source. All other rights reserved. 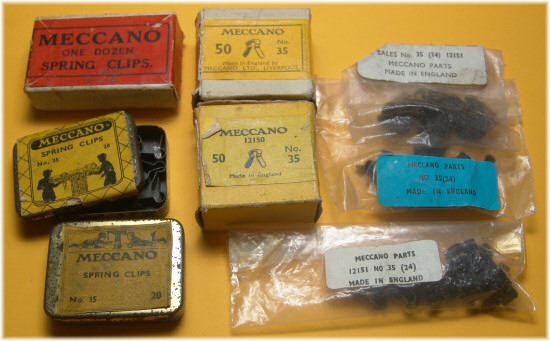 Spring clips, being effectively consumable items, have appeared in almost all types of spare parts boxes. Initially small boxes were sold of "special keys". The name Spring Clip first appeared in 1912, and the white box with removable lid at the top left of this photo probably dates from around 1920 or so. Later, small tins were used for the small parts, and I believe the cross-hatching on the centre left tin indicates the era as blue/gold pre-war parts. Some parts continued in tins similar to these post-war. I'm not so sure of this date, as the picture of the two boys lying down is much earlier, normally 20's.

More spare parts boxes
This image does not belong to the webmasters and is copyright.
Please do not download or copy it for any purpose. It has been
kindly provided for use on this site by the image owner,
Clive Weston 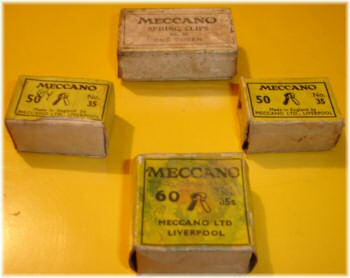 Always one to have a few oddities around, Clive has sent us pictures of the boxes to the right. At the top, a rare early box (20's) with the part number on the label – compare this with the probably earlier version in the photo above.

There are two different 1950s boxes in the middle, and at the bottom an unusual box of sixty spring clips. We weren't sure where these were from...

Extract from December 1939 outfit 1 manual
This image does not belong to the webmasters and is copyright.
Please do not download or copy it for any purpose. It has been
kindly provided for use on this site by the image owner,
John Nuttall