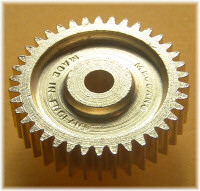 Part 31 is a lovely heavy solid brass gear, only ever supplied in the largest outfits (outfit 7, L, and 10).  They provide a 1:1 drive when paired together at 1'' spacing, and although they can be used with other gears at odd spacings this is unusual.  Since they are normally used in pairs, they can often be substituted by the multipurpose gear part 27f, introduced in 1970.

When first introduced in 1919, part 31 had 40 teeth.  These were only made for a couple of years, and are highly sought-after gears useful for making odd ratios in orreries and gearboxes. 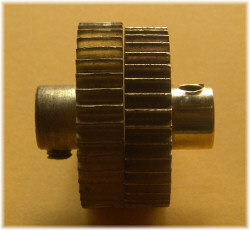 Other than the change from 40 teeth to 38 after the first two years of production, the main difference between different versions of these gears is in the outside diameter.  Initially 27mm (to fit the 40 teeth round), the gears stayed this size when the number of teeth were dropped to 38, leaving the gear effectively oversized.  In 1927, the outside diameter was dropped to 26mm, but this was a bit overzealous, and these pre-war gears don't mesh together very well. The photo above shows the largest (1921-26) and smallest (1927-41) versions of part 31.

The post-war variations increased in size a little to an intermediate size, around 26.5mm, making them work better together as pairs. Almost all of these gears are stamped Meccano, although the stamping ceased in the mid-70's.

Strange stamping on the boss of a pre-war part 31
This image does not belong to the webmasters and is copyright.
Please do not download or copy it for any purpose. It has been
kindly provided for use on this site by the image owner,
Ed Barclay 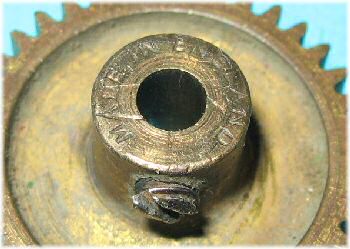 A real oddity on the stamping front is supplied by Ed Barclay.  This 1'' gear wheel is from a collection of 1930's Meccano, and is stamped on the face MFEA.  However, on the end of the boss we can clearly see Made in England.  This is a very unusual stamping, particularly for a pre-war part.

And now, Chris Mothershaw describes a very unexpected use for part 31:

I actually worked in the Binns Road factory for a couple of summers in the early '70s when I was a student.  I distinctly remember that we used to use 1" gear wheels to shim up the corners on wobbly pallets of castings: almost blasphemous. Chris Mothershaw