The term 'contrate wheel' is a fairly unusual synonym for what is more often known as a crown wheel (because its appearance is similar to a crown).  For the first few years, Hornby referred to this as a "contrite wheel" (sic), but at least that was corrected.  The word 'contrate' is probably only still used today because of its inclusion in the Meccano system.

The 50-tooth and 25-tooth contrate wheels
All images on this site are copyright. This particular image belongs to the
webmasters, and you may copy it for your personal use, or for a non-
commercial website - if you credit the source. All other rights reserved. 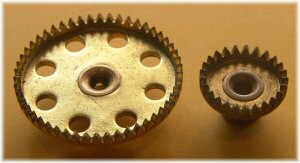 Two very early parts in the Meccano system, designed to transmit drive when the axles are at 90 degrees.  Later on, bevel gears were introduced to do the job better, but contrates were by that time stamped out from sheet brass and thus much cheaper to make.  Although they were only included in outfits from 8 upwards in the 1937-on sets, they were included in the Gears outfit and thus are very common parts.

They are also used as clutches, since a pair of equal size mesh perfectly and only take a fraction of a revolution to do so (unlike the dog clutch, which can take up to half a revolution).  The 50-tooth part 28 also meshes perfectly with a 50-tooth gear part 27.  Since the large contrate is a common part with 8 holes it is often used as the crown wheel on a differential, and the smaller contrates used inside the differential instead of bevels.  Sadly, part 28 was never made with six holes and therefore cannot be easily used to make a spur differential.

Various sizes of early milled small contrates
This image does not belong to the webmasters and is copyright.
Please do not download or copy it for any purpose. It has been
kindly provided for use on this site by the image owner,
Clive Weston

The first contrate wheels were milled from solid brass, before the invention of the patent boss in 1911. The photo to the right of three different solid small contrate wheels shows the variation in size of these early contrates.
Long and short boss versions of the plastic part 28
This image does not belong to the webmasters and is copyright.
Please do not download or copy it for any purpose. It has been
kindly provided for use on this site by the image owner,
Richard Payn

With the introduction of the plastic gears in 1979, the same variations are seen with the boss as happen with the spur and pinion gears parts 26 and 27.  Initial UK-produced parts have a slightly longer boss than the later ones.  Parts marked Meccano England have a long boss, but some are known with a shorter boss.  These may have been parts manufactured in France in the early 80's.  Later French parts (with the stamping just Meccano) have shorter bosses, as do the 1990's versions in black.

Odd nickel-plated contrate (next to brass one for comparison)
This image does not belong to the webmasters and is copyright.
Please do not download or copy it for any purpose. It has been
kindly provided for use on this site by the image owner,
Michael Conduit 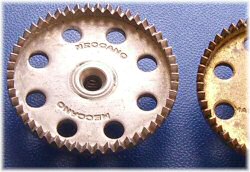 Here's a strange duck – a nickel-plated contrate.  The stamping appears to be late pre-war (about mid-30's), but it is nickel plated as you can see by the brass one next to it.  The tappings are brass internally, showing that it appears to have been nickel plated before it was tapped.  Perhaps it was dropped in the nickel tank by mistake, says Michael Conduit?

Reversing the boss on a plastic contrate wheel
All images on this site are copyright. This particular image belongs to the
webmasters, and you may copy it for your personal use, or for a non-
commercial website - if you credit the source. All other rights reserved.

Richard Payn (and others on Spanner) describe a way of reversing the boss on the plastic contrate wheels.  One way of doing this using common Meccano parts is shown to the left.  A long bolt is placed through the boss of the contrate, and on the other side a pair of double brackets and a large washer complete the "boss puller".

Tighten the nut slowly and the boss will come out cleanly.  You can then press it in the other side, as shown on the example to the right.  This is a very useful space-saving part, and might even pass as "genuine Meccano" depending upon how strictly you interpret the rules! 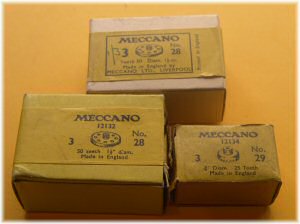