The seven 'standard' pinions
All images on this site are copyright. This particular image belongs to the
webmasters, and you may copy it for your personal use, or for a non-
commercial website - if you credit the source. All other rights reserved. 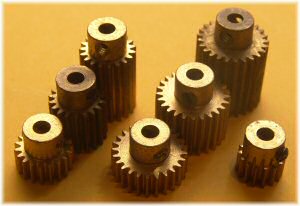 Technically, these are all spur gears, as they have the teeth perpendicular to the face of the gear. However, when two spur gears are used together the smaller one is known as the pinion. So, we think of these gears as pinions, generally.

The picture to the right shows the two main sizes of pinion, half-inch and three-quarter inch diameter, each in three difference face depths. The later 15-tooth pinion is shown on its own, and was only available with a quarter-inch face.

The most surprising issue that has come up when compiling this page is the very late change to double-tapped bosses on Meccano pinions. Although many common parts such as 1'' pulleys, sprocket wheels, and bush wheels were double-tapped by the end of 1927, gears and pinions were still single-tapped and stamped Meccano Fabrique en Angleterre. Obviously, there was a stock of single-tapped parts coming from a different production line (particularly pinions, which didn't use the same bosses).

However, examples of parts 25b and 26c have been found single-tapped. These parts were only announced in Meccano Magazine of March 1929 and presumably were launched around that time. This is very late indeed for single-tapped parts of any description.

There are many differences in the stamping of pinions. Pre-war examples are often stamped, just Meccano or Fabrique en Angleterre. Post-war, very few of the smaller 19-tooth pinions are stamped, and not all the larger ones. There are many reproduction parts in circulation.

In the late 70's, the 19-tooth pinion was modified to have plastic teeth. The first attempt of this, in the pale canary-yellow plastic, was something of a failure as the plastic proved too brittle for such a small part. See the broken example of part 26.ye in the table below. At a later date, a less brittle plastic was used with a different mould (and a slightly different colour, see 26.ye1 below), which appears to have solved the problem.

Long and short bosses on part 26
This image does not belong to the webmasters and is copyright.
Please do not download or copy it for any purpose. It has been
kindly provided for use on this site by the image owner,
Ed Barclay 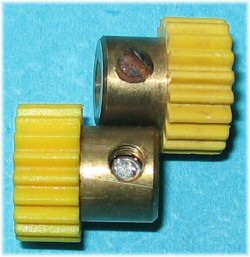 The picture to the right shows both types of pinion. It is thought that the longer-boss ones are principally UK production, and the shorter boss versions (including the later black pinions) are French.

Plastic part 26c - split of course!
This image does not belong to the webmasters and is copyright.
Please do not download or copy it for any purpose. It has been
kindly provided for use on this site by the image owner,
Richard Payn 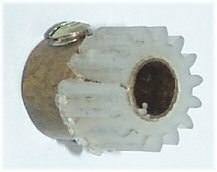 In 1979, there was an attempt to make a plastic version of the 15-tooth pinion part 26c. The plastic part proved too small and would break round the brass boss. The part was abandoned, and part 26 was instead supplied in the Meccanoids outfits. However, a few did make their way out of Binns Road. This example to the right is of course split, as most of them are likely to be.

Pinions in a range of spare parts boxes
All images on this site are copyright. This particular image belongs to the
webmasters, and you may copy it for your personal use, or for a non-
commercial website - if you credit the source. All other rights reserved. 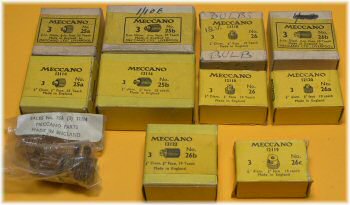 Note:  ¹ The date and reason for this is completely unknown. Cast parts are usually wartime economy measures, but the tongue key dates this from 1907 to 1912 without much doubt. Where does this fit?