A very confusing set of numbers, these.  It used to be easy, the 23 being without a boss, and the later 23a with boss.  In 1968, the pulley without boss changed to plastic, for economy reasons.  However, almost immediately, they reintroduced the brass version, calling it 23b.  So, although they look the same, the brass version changed numbers and the 'standard' part supplied in outfits was plastic.

Two much later parts, the plastic pulley 23ap with brass boss, and the rubber pulley 23c are also included on this page.

A range of half-inch pulleys, small, medium, and large
This image does not belong to the webmasters and is copyright.
Please do not download or copy it for any purpose. It has been
kindly provided for use on this site by the image owner,
John Nuttall

The half-inch pulley without boss was originally very small and thin, only ½'' overall and 1/8'' thick.  This changed to the larger and thicker form we're all familiar with in 1913.  There is also a very unusual intermediate size of pulley, 9/16'' overall diameter.  This appears to have been a very short-lived part, perhaps only during 1913.  You can see the three sizes in the picture to the right.  The 'economy' wartime version from 1915-18 was thinner, more like the original, but only temporary.  After 1968, the pulley changed to plastic, as you can see from this photo.

A range of half-inch pulleys, with and without boss
All images on this site are copyright. This particular image belongs to the
webmasters, and you may copy it for your personal use, or for a non-
commercial website - if you credit the source. All other rights reserved.

During the wartime economy in 1915, the part 23a with boss was added.  After 1918, this became the more familiar solid brass version you can see in the photo to the left, and didn't change its form from then on.

Immediately after the part 23 was changed to plastic, it continued in brass as part 23b.  This part was not supplied in outfits.  All half-inch pulleys without boss from this date in outfits were plastic ones.

In 1993, the part 23ap half-inch plastic pulley with brass boss was introduced, along with the part 23c rubber pulley.

The very small original half-inch pulley survived until 1913, and so a small number are found stamped "Meccano" as this crossed exactly with the beginning of parts markings.

Somewhere in the late 70's, the plastic pulley's central portion was enlarged in diameter, and thinned out to be flush with the rim of the pulley.  At the same time, the "Meccano" raised letters on the rim were removed (otherwise they would not run smoothly when two are placed next to each other), and the yellow changed from a daffodil yellow to a more orangey colour.  It appears that the lettered variations are earlier, from 1968 to the mid-70's, and the non-lettered flush boss variations are later 70's.  Combat outfits containing the olive green version of this pulley have been found with both variations in the later 1978 packaging, indicating that the change of the mould for part 23 is probably at some point in mid-1978.  Please contact us if you have information to the contrary!

John Bader sent a picture of a nickel-plated non-magnetic half-inch pulley without boss (23.ni2 below).  It is stamped Meccano, but its date is unknown.

My Uncle was married in 1937 and as a wedding gift his new wife presented him with a Set G specially finished by Liverpool in Nickel Plate.  All parts, wheels, boilers, flexible plates.  I would suspect that the above mentioned ½'' Pulley is one of those specials provided by Liverpool.  The nickel plating service was offered from 1927 to 1941. Ed Barclay

This helpful observation by Ed of course opens up the horrifying possibility that we need to start looking for nickel-plated flexible plates!  There certainly can't be many of these around, unless Ed knows where his uncle's outfit has got to.

Orange type 1 plastic pulley p/n 23
This image does not belong to the webmasters and is copyright.
Please do not download or copy it for any purpose. It has been
kindly provided for use on this site by the image owner,
Neville Bond 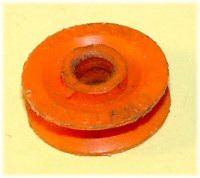 Neville Bond has sent me a picture of this type 1 plastic pulley in orange.  It has the markings Meccano England, dating it from between 1968 and 1978, but I don't know of an outfit containing this.  Neville believes this is an example of an experimental colour scheme from Binns Road that never saw the light of day.

X-series threaded pulley next to part 23
This image does not belong to the webmasters and is copyright.
Please do not download or copy it for any purpose. It has been
kindly provided for use on this site by the image owner,
Clive Weston

To the left is a picture of something to keep your eye out for.  The half-inch threaded X-series pulley is not a standard Meccano part but is often confused with one.  The example on the left shows how it is somewhat smaller than the Meccano part 23 half-inch pulley on the right of the photo.

Box of six part 23a
This image does not belong to the webmasters and is copyright.
Please do not download or copy it for any purpose. It has been
kindly provided for use on this site by the image owner,
William Irwin 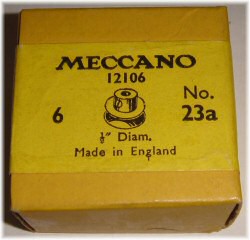