A selection of colours for 1½'' pulleys,
pre-war above and post-war below
All images on this site are copyright. This particular image belongs to the
webmasters, and you may copy it for your personal use, or for a non-
commercial website - if you credit the source. All other rights reserved. 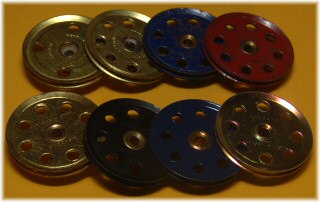 The 1½'' pulley has been a part of the Meccano system from the very beginning, but often sadly ignored. It was originally part number 11, renumbered to 21 in 1909. The flanged wheel (initially 9, then 20), and the 1'' pulley (initially 10, later 22) were always used far more in models and outfits.

Although it gained a tyre at the same time as the other pulleys, the tyre was never included in any outfits and thus remains scarce. Not until 1978 did it gain equal footing in outfits with the 1'' pulley, which explains why they are so common in the very late finishes.

There were three main developments in the 1½'' pulley design. The very first MME and Meccano parts went through a bewildering sequence of styles with various numbers of holes. These were cast or milled solid brass, with a groove cut in the rim. Most have milled recesses in each side, making them recognisable as pulleys.

With the advent of the "Meccano patent" boss in 1911, the pulley along with several other parts changed to a two-part pressing with separate boss. The two sides are held together by (normally four) smaller holes opened out in the style of an eyelet through larger holes in the opposite face. Again, many varieties are known, as can be seen from the table below. The finish is most often brass although there are nickel variants.

Somewhere around 1920, the 'normal' design appeared, where the part was made from two identical pressings, each with two eyelets fitting into the other face. Both faces also have four plain holes, making a total of eight standard Meccano-sized holes round the pulley. This design subsequently went through all the usual phases: single and double-tapped brass, enamelled blue and red, blackened steel during the brass shortage of the Korean war, and then matt brass, light and dark yellow (rare), dark blue in 1978, and iridescent in 1979.

John Bader has pointed out a variation on the standard 1½'' pulley, shown as 23.br3b below, which appears the same as the single-tapped eight-hole version.  In fact the four holes that are peened over are the same, but the four additional drilled holes are closer to the edge of the pulley, and so aren't at standard half-inch spacing from the boss.  Is this a mistake or a common variant?