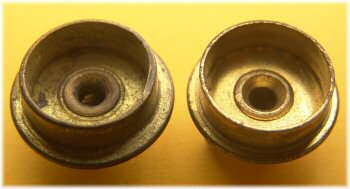 The small flanged wheel was introduced in 1927 and initially used only in the Geared Roller Bearing (part 167) with large flanges.  It was very soon added to the list as a standalone part.  The large flange was subsequently reduced, and the part went through the usual range of colours and finishes from this period on.

In this picture, the large flanged variety is shown to the left, and the more common one to the right.  There is plenty of variation in the flange size, and you should make sure you have a 'matching set' of wheels if possible.

The small flanged wheel came in at almost exactly the same time as bosses became double-tapped.  It is thought that all of them are double-tapped, although we can only expect to prove the opposite.

Double tapping is presumed to have started in early 1928. The GBSC requires double tapped collars in the Fidler's gear. The leaflet refers to them as "recent" and points out that people who don't have them can use spiders from universal couplings instead. 20b was introduced in late 1927. The MM anouncement of Dec 1927 shows no visible tapping in the boss, which suggests it is single. However the Boiler announcement in Jan 1928 MM shows a double tapped one used with a sleeve piece as an oscillating cylinder.

These MM pictures, however, are notoriously unreliable. The same picture shows the sleeve piece with a single hole on all three sides, instead of having two holes opposite the slit.

I do not have, and have never seen, single tapped ¾'' Flanged Wheels. They may have been single for a month or two before going double, I don't know. We need someone to say, "I've got some," and send a picture.

Although there may possibly be pre-production or sample parts with single-tapped bosses, I would expect them to be exactly that.  The author has an almost mint outfit 4 from December 1927, right on the cusp of the change to double-tapped bosses.  Most of the common parts are stamped "Meccano" and double tapped.  The gears are stamped "Fabrique en Angleterre" and single tapped, as was the case from 1921 to 1927.  It seems that in this outfit there was still a stock of certain parts being used up in the older single-tapped style.  The outfit has no small flanged wheels, which were introduced to the outfit 4 in the following year.  It seems very unlikely that it would be introduced single-tapped. 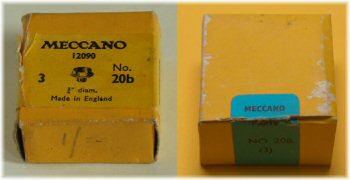 The picture to the right shows two dealer packs of the small flanged wheels.  Like their larger brothers, these are inexplicably packed in threes.  The box to the left is from 1954 on (with the product code 12090) but since the parts are brass the label would have remained yellow until 1963/64.  The box to the right with the blue label and pale yellow box would have been somewhere between 1964 and the end of that decade.