Flanged wheels in various forms
All images on this site are copyright. This particular image belongs to the
webmasters, and you may copy it for your personal use, or for a non-
commercial website - if you credit the source. All other rights reserved. 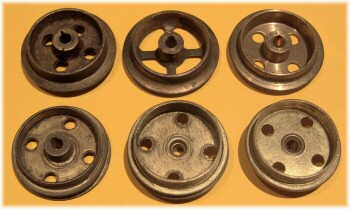 The very earliest of the Meccano wheels (and the first on the list), this part was originally a multi-purpose "Flanged and grooved wheel".  The original Meccano patent made several references to train-related models, and it was natural to have a flanged wheel included.  The extra groove was an unusual but clever addition to the part, making the wheels directly drivable and also usable as pulleys.  Early versions of this part (the top three and the bottom left in the photo above) had the boss inside the flange.  After the introduction of set screws and bosses in 1912 the boss had to be reversed to allow access to the set screw (bottom centre).

There were a huge number of variations in this part, but the most important change was when the grooved section was removed in 1919, leaving the part as the simple "Flanged wheel" (bottom right in the photograph above).  In 1928 it was joined by part 20b, the small flanged wheel.

The usual changes in the bosses of these parts (from feather to tongue to single-tapped and finally double-tapped) is to be expected.  The only other significant change in the part is from the original "flanged grooved wheel" which was a combination pulley and flanged wheel, to the later type "flanged wheel", in around 1919.

For other variations from one part to the next, see the table at the bottom of this page.

Maltese Cross style flanged wheel
This image does not belong to the webmasters and is copyright.
Please do not download or copy it for any purpose. It has been
kindly provided for use on this site by the image owner,
Clive Weston 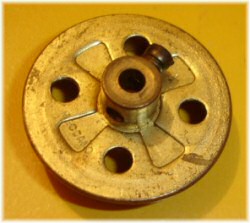 There is one slightly contentious version of the flanged wheel, as pictured right.  Known as the "Maltese Cross" style, for obvious reasons, this is most often thought of as a French part.  However, there do seem to be rather too many of them in UK-sourced collections for this to be exclusively the case.  The jury is still out, and will probably remain so until good proof of these existing in UK outfits is found.

The two boxes to the right date from the early and late 50's.  Strangely, flanged wheels mostly seem to have been supplied in boxes of three, which seems about the least useful quantity to supply.