One of the first things decided upon with the design of Meccano was the use of 8 gauge wire for axles.  This determined the size of the holes in the perforated strips, and from there the unusual size of the nuts and bolts.  It is one of the few Meccano parts that has hardly changed in a century, and yet there are subtle differences, as you will see. Note: The numbering system for axles changed substantially, and is very confusing.  Extremely early rods were not numbered, and supplied in lengths for the user to cut to length.  For a while various part numbers were shared by more than one length.  Most numbers had settled down by the start of Meccano in 1907, except for the 1'' rod as shown, which was initially given the number 18, temporarily given the incorrect number 18a and then moved to 18b (to be in the correct sequence) in 1922.

Three axle ends: cut-off, milled, and 70's
All images on this site are copyright. This particular image belongs to the
webmasters, and you may copy it for your personal use, or for a non-
commercial website - if you credit the source. All other rights reserved.

The first (MME) axles were grooved to accept the MME 'feather' key.  As stated above, part numbers and lengths changed considerably during this early period.  But, after around 1907, the groove was removed and the parts became as we are all used to.  The only significant change was to the ends.

Early (pre-war) axles have their ends cut off sharply, as shown by the left-hand axle in this photo.  Lengths were not particularly accurate.  In the 30's the axles gained 'milled' ends and a much better consistency of length (as per the middle axle in the photo).  The length is measured including the rounded ends.

Rounded axles on clockwork motors appeared even on the 1912 Trinity motor. Later the No1 motor in around 1919 and on had them as standard but the main axle selection became rounded in the first blue/gold sets of 1934. Jeff Jones
It is my opinion that later 70's rods can be easily identified by a much rougher end-milling as shown in the right-hand axle, although there are no DMS part numbers for these. 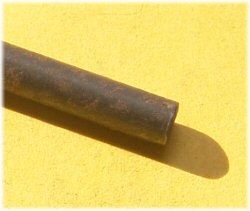 The axles in the Mechanised Army outfit (1939-41) are blackened, and easy to identify. However, in an outfit recently investigated, the 6½'' and 4½'' axles had milled ends (as would the normal axles), but the 2'' axle had cut-off ends as shown to the right. This is unexpected for this era.

A range of axles in different spare parts boxes
All images on this site are copyright. This particular image belongs to the
webmasters, and you may copy it for your personal use, or for a non-
commercial website - if you credit the source. All other rights reserved.

The picture above shows a range of different packs for axles.  At the top is the oldest, the patterned brown shiny paper pre-war (although these I believe are wrapped axles from an outfit, rather than for individual sale).  The paper envelope at the bottom left is also pre-war.  Yellow boxes date from the 50's, and the lighter yellow long box for part 13 is later still.

A selection of pre-war axles in paper wrapping
This image does not belong to the webmasters and is copyright.
Please do not download or copy it for any purpose. It has been
kindly provided for use on this site by the image owner,
Clive Weston 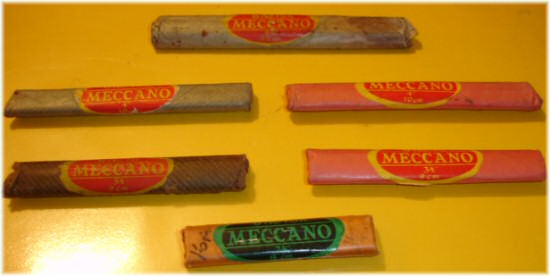 The photo above shows a range of pre-war axles.  The bottom one is the earliest, with the green sticker indicating the red/green era (1928-33).  The red-on-yellow scalloped stickers follow this, we believe, with either brown or light red paper wrappings.  The top axle (part 15a) is immediately pre-war.  Note that all the lengths are also shown in centimetres at the bottom of each label.

Note 1: 11'', 5'', and 2' rods are shown in EMP as "rod, no groove" from 1905 then "as above in mild steel" from 1918.  6½'' and 3½'' rods show no change to mild steel, and 8'' is shown as mild steel from 1910.  It is likely that the third row of the above table is inaccurate, use the fourth for most pre-war Meccano.  Check the top table for the dates of introduction of the later axle lengths.
2: Although EMP gives the date of removal of the MME groove as 1905, Love & Gamble show the introduction of plain rods only in the Duke St factory in mid-1907.
Please send us pictures of missing parts! Hints and tips for pictures
Take a picture of the part in very good light, preferably on a plain yellow background, without a flash but with a tripod.
Ideally, trim the picture to about 150 pixels per inch of the Meccano part (unless the part is particularly big or small), save it as a reasonably good quality jpg file with a filename of exactly the part number, for example 19b.ni1.jpg, and email it to us by clicking on 'Contact us' at the top of the page. Thanks!