One of the few parts in the Meccano system to use a 45° angle, this part wasn't introduced until the lettered outfits in 1934.

Obtuse angle brackets haven't changed much over the years!
All images on this site are copyright. This particular image belongs to the
webmasters, and you may copy it for your personal use, or for a non-
commercial website - if you credit the source. All other rights reserved.

Apart from the changes in finish documented below, it is possible to detect the very slightest of changes in the manufacture of this part over the years. From around the start of the zinc period (1966 or so), the crease in these parts is noticeably sharper. I think you will see from the photograph above that the earliest examples are effectively curved where the angle is formed, but the zinc and later ones have a sharp line on the inside rather than a radiused bend.  It is possible we may be able to use this in order to differentiate between Korean (1951-52) blackened steel examples and the much later Army Multikit (1973-) blackened steel parts. 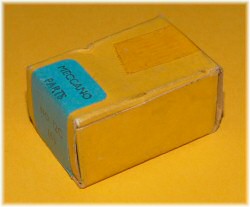 Not a very interesting picture, sorry! The blue label on the box to the right shows that this is from the silver/yellow/black period (or possibly even later), late 60's.

late 50's or early 60's spart parts box of part 12c
This image does not belong to the webmasters and is copyright.
Please do not download or copy it for any purpose. It has been
kindly provided for use on this site by the image owner,
John Nuttall 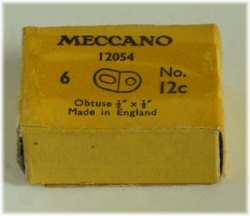 Left, a more interesting picture of obtuse angle brackets, dating from between 1954 (after the introduction of part number codes) and 1964 (when the box to the right would have taken over).