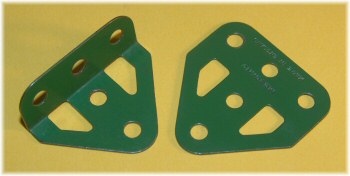 Coincidentally, the trunnion was also mentioned in the March 1921 suggestions section (along with the reverse angle bracket), although it is mentioned there as being "in process of manufacture" rather than "already added to our list of parts".  We could perhaps draw from this a suggestion that the trunnion was available after the reverse angle bracket (part 124) but before the flat trunnion.

Although the flat trunnion was included in every outfit from 1922 onwards, the trunnion was originally only supplied in the very largest outfit 7 of 1922.  It was included in the outfit 6 from 1924, but wasn't brought down to the very smallest outfits until 1928, after which it became a very common part.  For this reason, the trunnion is quite rare in nickel plate and pea-red finishes.

Interestingly, the definition of the word 'trunnion' is of a pin or pivot, especially a pair of such pivots allowing something like a cannon to pivot.  In truth, these Meccano parts are mounts on which trunnions can be attached (either bolts or pivot bolts or even an axle), but the parts themselves are not trunnions.  However, such was the power of Meccano, a large number of people now refer to any side mounting plates or brackets as trunnions.

One of those rare absolutely consistent parts from its introduction in 1921 through to the end of production, it does however have the honour of being one of the most varied in colour schemes, certainly if you include the many colours that the flat trunnion has been produced in since 1979.  We may have difficulty getting pictures of all of them!

The only change to the trunnion was the odd variation (along with many other parts) where the irregularly shaped holes were omitted in the Mechanised Army parts of 1939-41.

None known, as yet.

Trunnion pack from late 50s
This image does not belong to the webmasters and is copyright.
Please do not download or copy it for any purpose. It has been
kindly provided for use on this site by the image owner,
William Irwin 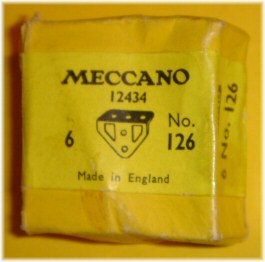 Flat trunnion pack from 58-63
This image does not belong to the webmasters and is copyright.
Please do not download or copy it for any purpose. It has been
kindly provided for use on this site by the image owner,
William Irwin 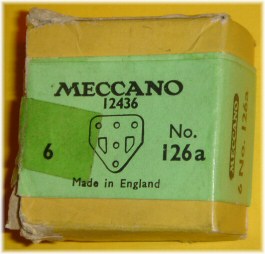