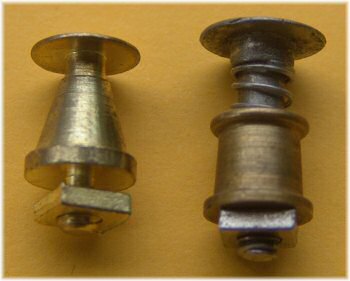 On the right are examples of the standard Buffer (part 120) and the slightly later Spring Buffer (part 120a).  The Buffer was included in the Inventor's Accessory Outfit B (1920-1923), but not in any other outfits.  The Spring Buffer was included in outfit 7 from 1925 (containing four, and then six from 1930), and the later outfit L, but was dropped in the new numeric outfit 10 from 1937.  Both parts appear in the November 1941 parts list, but not after that.

The four components of the spring buffer, part 120a 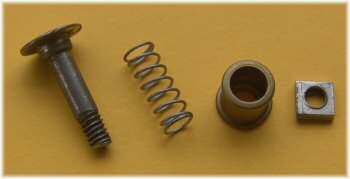 This picture shows the component parts of the very neat Spring Buffer, part 120a.  Only one nut is used to attach the buffer, and thus it is the spring itself that holds the part in place.  The body is loose on the shaft, pushed against the nut by the spring.  After a suggestion in the Meccano Magazine, the spring used inside this part was sold on its own from 1927, and given the name "Spring for Spring Buffer".  It was almost immediately renamed to "Compression Spring", and is the only reminder of the Spring Buffer.

Thin, thick, and small versions of the Buffer (part 120) 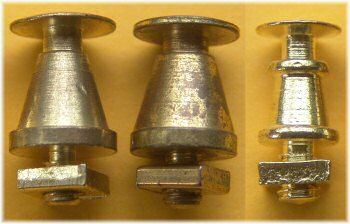 There appear to be three different versions of the standard buffer, shown in the photo to the right.  These are (I believe) in sequence of date.  You will note that the first two are larger, around 9.6mm (3/8'') diameter at the head and 17mm in length overall, and the last one is considerably smaller at 7.8mm (5/16'') diameter, although very nearly the same length.  However, there are two clearly different versions of the larger type, which will be described as "thinner" and "thicker".  In my experience the thinner variety is more common, but not by much.  The smaller third type is much less common.

In attempting to date these, I note the following issues:

There don't appear to be any variations in the Spring Buffer, part 120a, during its UK production from between 1922 and 1941.

There are other variations on this part, but they are believed to belong to other systems rather than Meccano.  Until we get more pictures and information, we can't be certain. 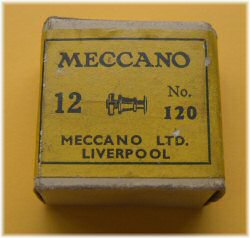 The boxed spare parts shown to the right are probably quite late ones, in a white cardboard box.  It is interesting to note that the picture on the box label is clearly of the smallest third type of buffer (although we all know that this can't be taken as a certainty).  Without an X-ray machine or the inclination to open this packet, we don't know for sure which parts are in it.  On the other hand, we don't know the date for sure either, although it is likely to be after 1931 when the boxes of a dozen were announced to the trade.