The Meccano reed hook was introduced, along with the other special loom parts, in 1916.  It was added to the largest outfit (number 7) in 1921.  It was also supplied in the 7 outfit's replacement (the Outfit L) in 1934.

With the new numeric outfits 1 to 10 in 1937 the reed hook and many of these special parts were dropped, although it was still available as a spare part until production stopped in 1941.  It was never reintroduced.

The eye of the reed hook 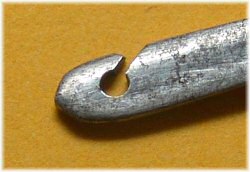 A picture of the end of the reed hook is shown here, as many viewers of this site might not have seen one of these in the flesh.  The reed hook has only one purpose – to assist with stringing the warp threads on the Meccano loom.  The hook is passed between the reeds, the warp thread is hooked on, and pulled through.  In my experience it is possible to 'post' the reed hook not only through the reeds but right through the correct healds too, and draw the thread completely through the appropriate holes.  It would be extremely difficult and time-consuming to thread a loom without this tool, or at least one very much like it.
Slightly different end on reed hook
This image does not belong to the webmasters and is copyright.
Please do not download or copy it for any purpose. It has been
kindly provided for use on this site by the image owner,
William Irwin

William sent me a picture of the end of a different reed hook, where the slot has a very much more pointed end. It's unclear whether this is the 'right' version and the one above is broken, or whether the notch was deliberately cut to make it easier to thread the hook. Perhaps when we've got a few more photos together we might be able to make a better decision.

Nigel Collins has pointed out that there is a wrapped example of part 105 shown in the "Bible", on page 328 (Hornby Companion Series Volume 6). However, the one there appears to be French, by the look of the yellow and red scalloped label. About as good as we're going to get, however.

Reed hook in brown paper wrapper
This image does not belong to the webmasters and is copyright.
Please do not download or copy it for any purpose. It has been
kindly provided for use on this site by the image owner,
Richard Payn

Some opportunistic spotting by Richard has produced this example too, looking similar. Are these parts from Binns Road, do we think? Most of the parts I've seen with this sticker are French, but I might be wrong, as usual.